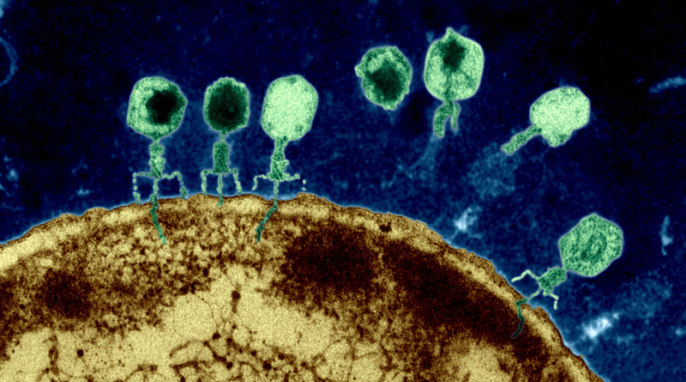 Researchers have figured out how viruses communicate and cooperate with each other and it is fascinating. Dr. Marie Davey explains.

For everything from blue whales to bacteria, communication is an essential part of life. Living organisms use an astonishing array of methods to signal one another: sounds, scents, touch, vibrations, and color. Lightning bugs signal in the night to attract mates, gorillas bellow to establish their territory, plants release hormones to signal insect attacks, and honeybees dance to tell their hive mates where the best flower patches are. Communication is essential for organisms trying to attract a mate, signal threats, identify kin, and coordinate collective behavior.

Viruses occupy the outer boundaries of our definition of what is “alive.” Like software without a computer to run it, viruses are tiny packages containing some of the genetic instructions to operate a cell but none of the machinery to get the job done. They are only able to reproduce by hijacking a host cell and using its machinery to build more copies of the virus. Nevertheless, new research from Israel’s Weizmann Institute of Science indicates that even viruses can communicate with one another.

Dr. Zohar Erez and colleagues initially set out to test whether Bacillus subtilis bacteria under attack by the virus species phi3T could warn one another about the infection. They found that survival rates of the bacteria increased when they were first exposed to the chemical signals released by bacterial colonies already infected by the virus. The chemical signal linked to improved survival was a peptide, a small protein, which they named arbitrium. Much to the researchers’ surprise, it was not the bacteria producing arbitrium as a signal, but the viruses.

So what do viruses use arbitrium to “talk” about? In this case it is mostly peer pressure about birth control. It might seem strange for the virus to be the one calling a halt to making new viruses and killing its host in the process, but this is essential for ensuring that the viral population as a whole survives. If the virus kills all its potential hosts, it will also die, so it is advantageous to allow some of the bacteria to survive. Many viruses actually have two life cycles available to them when they infect a cell. One option is to follow the lytic cycle, hijacking the host cell’s machinery to make dozens of copies of themselves and then rupturing the cell to release the new viruses. Alternatively, a virus can follow the lysogenic cycle, injecting its own DNA into the cell, where it can lay dormant and even be passed down through generations until something triggers the virus to become active again and replicate.

The arbitrium molecule that Dr. Erez and his colleagues discovered acts like peer pressure in the viral population, signaling the viruses to take the lysogenic route and go dormant instead of replicating and killing their hosts. As the virus population grows, arbitrium concentrations increase, making the peer pressure stronger, and telling more of the new viruses that it is better for everybody if they go dormant when they find a host cell, rather than recklessly replicating.

The scientists demonstrated arbitrium communication in one virus; they also found what looks like similar systems in the genomes of more than 100 other viral species. The fascinating part is that each virus has a similar yet unique communication molecule, suggesting that each one actually “speaks its own language” that other species cannot understand. Even at the borders of life, communication is complicated—and essential.

—Dr. Marie Davey is a researcher in mycology and molecular ecology at the University of Oslo with a PhD from the University of Alberta. She is interested in all aspects of science and its intersection with society, and has also worked as a science policy advisor and environmental consultant. A transplant to Norway, she’s still maple leaf Canadian to the core. When she’s not in the lab, she’s wandering the forest and the mountains, being fascinated by the plants and fungi around her. @biophilesblog

Featured image: Phages on the surface of an Escherichia coli cell inject genetic material into the bacterium. Image by Eye of Science/Science Source via NIH.