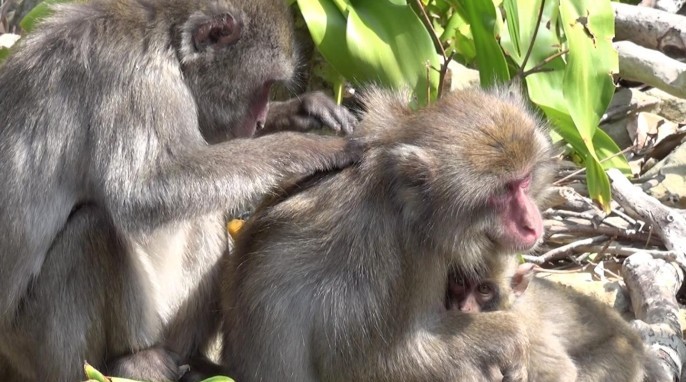 What if instead of just hanging out on lunch dates or at happy hour, people sat around and picked parasites from their friends’ bodies? That probably wouldn’t go over too well with humans, but primate researchers from Kyoto University have found that for Japanese macaques, popularity might just be the key to better health and hygiene.

Normally, more social interaction between animals means more of a chance to spread parasites and disease (think being confined indoors with other people during flu season). But if you’re a female macaque, having a strong social network of friends to groom you is important to living a louse-free life.

While generally considered harmless to people, lice are tiny parasites that feed on a host’s blood and can sometimes cause allergic reactions in animals. They also happen to be one of the most common external parasites found on Japanese macaques.

Researchers wanted to see how social rank within a group of female macaques affected the number of parasites on an individual. Instead of catching the macaques and counting the number of parasites on each female, the team estimated lice load by watching for the very obvious grooming gestures of the monkeys. Past studies have shown that up to 98.9% of what macaques picked off of their friends were louse eggs. So after watching female macaques groom one another, researchers were able to predict that an average macaque has up to 550 eggs (nits) or 230 adult lice on them at any given time.

The researchers watched the grooming behavior of a group of female macaques over 142 days. By observing who groomed whom and how often individuals were groomed, the team created a model to show the effects of social rank on the number of parasites on an individual macaque. Using this model, they observed that higher ranking females were groomed more, and the more grooming a female received, the lower their lice load was.

This was even more obvious during winter and summer seasons. During the winter, a macaque’s hair is longer and more dense. This gives the lice more hair to hide in, so their population increased. However, the researchers observed that the more lice a macaque found, the longer they spent grooming. This resulted in an overall decreased lice load on the individual being groomed.

In the summer, higher temperatures make it harder for lice to survive, and shorter, less dense macaque hair makes it easier for groomers to find the lice. But in the fall and spring, both popular females as well as those with a lower social status had similar amounts of lice on their bodies. The researchers believe that this is caused by environmental conditions and by a drop in the frequency of social interactions outside of mating and birthing seasons.

How to Make Friends and Influence…Parasites?

While having parasites might not seem like the best way to make and keep friends, grooming for lice has been shown to lead to lower stress levels and higher endorphin levels for all involved. But what happens if you’re not one of the popular girls in the macaque world? You might just be out of luck. Because lice infestations can lead to allergic reactions, possibly resulting in the loss of protective covering or infection, they can have a direct effect on the health of the macaque. Lice infestations can also make a macaque a vector for disease.

Researchers believe that finding alternate ways to measure the parasite load and popularity of macaques will be the key to further unlocking the complicated social, environmental, and biological relationship between these hosts and their parasites. In the meantime, leave your nit comb at home the next time you head out with your friends. While it might be helpful to macaques, picking through someone else’s hair in search of bugs is still generally frowned upon in human social groups.