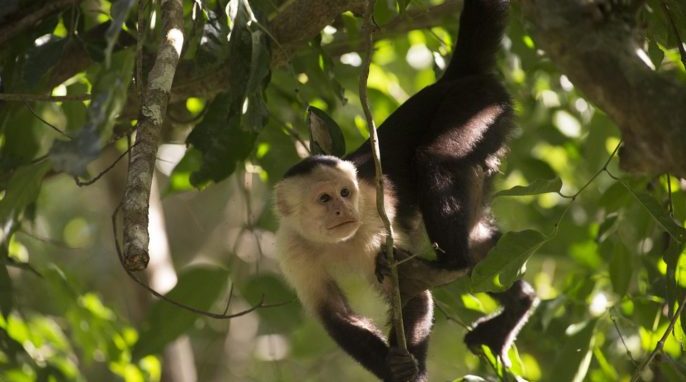 With the formation of the Isthmus of Panama, North and South America became connected by a thin but important strip of land that was at one time the location of a narrow seaway. As engineers recently worked to widen the Panama Canal that once again divides the two landmasses, a team of scientists acted quickly to dig through the rubble and collect newly unearthed fossils. What scientists from the Smithsonian Tropical Research Institute, the University of Florida, and the New Mexico Museum of Natural History and Science found in the rich soil layers has completely upended the evolutionary timeline of New World monkeys.

Using estimates of genetic divergence of New World monkeys, scientists hypothesized that primates arrived in tropical Central America starting between 3 and 4 million years ago. They believed that the primates were able to migrate to this southernmost part of North America only because a new land bridge, which emerged after violent tectonic activity, connected the two continents.

The researchers’ surprising discovery of 21-million-year-old fossilized primate teeth is the first evidence that New World monkeys actually began moving between North and South America much earlier than first thought. Previously, the oldest known examples of an animal making the transcontinental migration were the fossilized bones of giant sloths, believed to be between 8.5 and 9 million years old. Scientists now estimate that North and South American primates began to diverge and migrate between 22 and 25 million years ago.

This newly proposed timeline overlaps with the presence of a narrow Central American seaway that existed during the early Miocene epoch, which suggests that the Cebidae family of New World monkeys were able to travel by both land and water. This is a characteristic believed to be true of many other plant and animal species, but never before attributed to these primates.

To pay tribute to the location of its discovery and its ability to travel across the water, scientists have named this new fossil primate Panamacebus transitus. They believe that its closest relatives are the modern-day squirrels and capuchin monkeys found in Central and South America.

Other fossils discovered at the site include bats, horses, squirrels, camelids, crocodiles, turtles, and even a type of mammal known as a bear dog. The researchers are not sure why no other fossils of New World monkeys from this period have been found in this part of Central America, but they guess that perhaps most of the South American primates were just better adapted to habitats in the southern part of the Isthmus. Or maybe they are simply still buried beneath the soil layers, waiting to add their pieces to this mysterious puzzle.