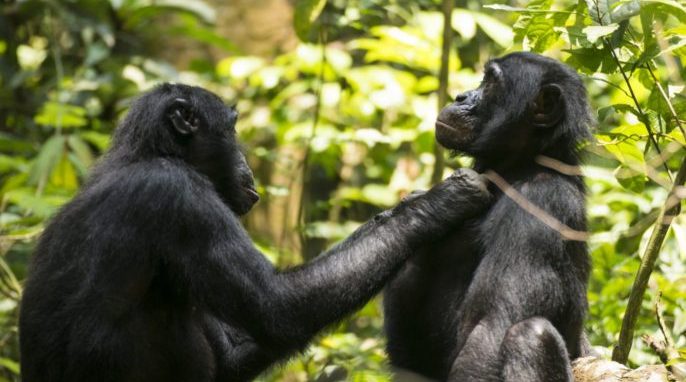 A study released in Current Biology has found that bonobos’ eyesight becomes significantly reduced when they reach around 40 years of age. We talk to the study’s lead author, Heungjin Ryu, to find out why his discovery is a sign that we have even more in common with our primate relatives than we previously thought.

ResearchGate: How would you sum up your main findings?

Heungjin Ryu: We found that wild bonobos began to show symptoms of long-sightedness at around 40 years of age. We were surprised that the pattern found in bonobos is strikingly similar to the pattern found in modern humans. This suggests that senescence of the eyes has not changed much from our Pan-Homo common ancestor, even though the longevity of the modern human is far longer than that of chimpanzees and bonobos.

[tweetthis]Bonobos observed in the wild exhibit signs of farsightedness similar to that of humans.[/tweetthis]

RG: What led you to consider whether bonobos become long-sighted with age?

Ryu: The fact that older bonobos require longer distances for grooming was already well-known among researchers at Wamba; however, we hadn’t paid much attention to it. One day, we observed the oldest male bonobo, Ten, grooming Jeudi. Ten had to stretch his arm to groom Jeudi and only when he found something on Jeudi’s body did he come close to remove it using his mouth. After one year, I started to realize that every older individual had different grooming distances. The results we found were very surprising, even for us. When I started to collect data, I did not expect that age could be such a strong predictor of long-sightedness.

RG: Has this kind of age-related long-sightedness been found in other animals as well?

Ryu: As far as I know, similar long-sightedness was found in captive Rhesus Macaques and Japanese Macaques in the wild under provisioned conditions. This age-related pattern might be very general in primate species or even in mammals—I would not be surprised that this finding is replicated.

RG: What are the implications of your findings for bonobos?

Ryu: One reviewer said that the old bonobos need glasses, at least for grooming. Another issue is that the long-sightedness might hinder the social functioning of older individuals. Having old eyes might influence grooming performance, which is very important for bonobos’ social life. I guess low grooming performance is one of the reasons that older individuals (particularly old males) are not popular grooming partners. Old males often groom others, but they are not groomed back. Considering that old male bonobos are usually low ranking, there might not be much social and hygienic benefits for the young to have grooming interactions with old males. However, old females are very central and highly ranked in bonobo society. This might make old females attractive for young and low-ranking individuals for grooming, even though old females usually do not groom in return and their grooming performance is probably low.

RG: What are the implications for our understanding them in relationship to humans?

Ryu: One is that long-sightedness is not the by-product of modern lifestyles (such as reading and writing), which demand near tasks from our eyes. It is rather a natural process of aging of the eye which is probably rooted in our relatives, non-human primates.