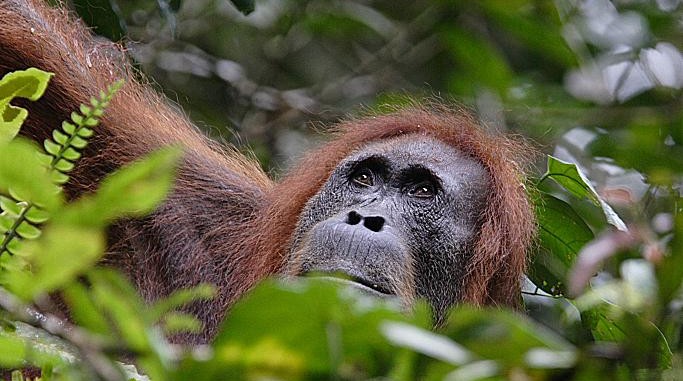 Good news from the jungles of Sumatra: extensive survey shows that more than twice as many orangutans live in Sumatra as previously thought.

Good news from the jungles of Sumatra: thanks to an extensive survey, biologists now know that more than twice as many orangutans (Malay/Indonesian from orang = person and hutan = forest) live in Sumatra as previously thought. The population estimate from 2004 was 6,600 individuals. The current estimate is 14,600 orangutans.[1]

No Jump in Orangutan Population

The reason the number went up doesn’t have to do with these animals multiplying like proverbial rabbits. In fact, biologists state that the numbers have almost certainly declined since 2004. So why is the population estimate so much higher?

Three major factors changed in the survey methodology between 2004 and 2015. Firstly, the 2004 estimate assumed orangutans only live at or below 900 m (2,953 ft) above sea level, while the 2015 estimate included habitat up to 1,500 m (4,921 ft) above sea level. Secondly, several areas which are inhabited by orangutans were not part of the previous estimate. Thirdly, areas which had been logged were not counted in the 2004 survey. Because of these changes, a much larger range was included in the most recent population estimates.[2] In fact, the range for the study increased by 2.6 times.

The scientists also conducted extrapolations based on multiple scenarios modeling the loss of habitat due to destruction of forests by humans. In all scenarios, orangutan populations declined and sometimes became isolated from each other, which is negative for the long-term diversity of the orangutan population.

Maintaining lowland forests and peatlands is especially important for orangutans living part of the year at higher elevations. These lowland areas are the most likely ones to be lost through expansion of agriculture. Additionally, humans impact orangutan populations in two other ways. Illegal hunting of forest primates directly reduces populations. High human population densities also drive away the animals from forest areas adjacent to settlements, even when the forest cover is intact.

By providing better data on orangutan habitats and the impact of habitat loss on orangutan populations, scientists can assist conservation efforts. In a worst-case scenario, orangutan populations could fall as much as 33 percent by 2030. With the data from the 2015 survey, Indonesian land-use planners can minimize deforestation through better planning where roads will be built and agricultural usage allowed.

Scientists recommend that conservation strategies focus on two main areas. Firstly, illegal hunting must be addressed by law enforcement. Secondly, all new land use must be accompanied by environmental impact surveys to minimize the negative impacts on orangutans. This includes preventing the use of peat land for palm oil plantations or other agricultural purposes.

This research is published in the journal Science Advances.