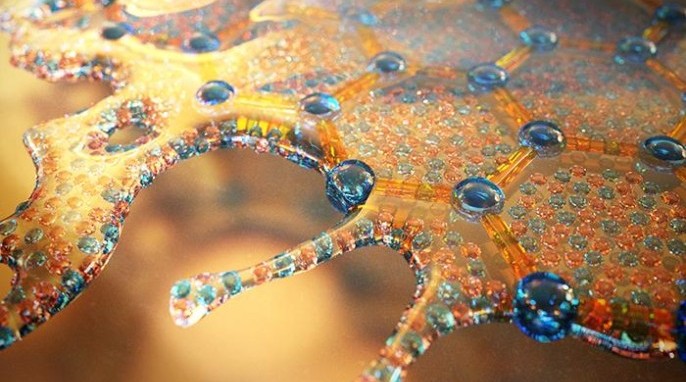 The Liquid Electrons of Graphene

Graphene has always been a material full of promise, and now researchers from Harvard University have found one more reason to wonder at this deceptively simple, two-dimensional sheet of carbon atoms. Electrons moving across one graphene layer have been observed to act like a fluid for the first time, showing a collective motion rarely seen in other metals. Potential applications of this new behavior range from electronic devices converting heat into electricity to a better understanding of black holes.

A Sheet of Promises

One of the most exotic materials known to scientists is hidden within your pencil’s graphite shavings. Graphite is made of stacked, two-dimensional layers of carbon atoms arranged in a regular hexagonal pattern. Peel off just one of these layers—which you can do with nothing but adhesive tape—and the result is graphene, a one-atom-thick layer of carbon atoms with remarkable properties. Its electrons travel as if they have no mass, reaching velocities close to the speed of light. This fast motion leads to highly conductive electrons that could revolutionize light-emitting diodes, liquid-crystal displays, and solar cells.

It’s not just about the electrons, either. The bonds between the carbon atoms are extremely strong, but the material itself is very light, the perfect combination to replace steel on lightweight aircraft or other vehicles. Graphene’s single-sheet structure also gives it a very large surface area, making it ideal for battery electrodes that must provide as many locations as possible for energy-carrying ions to sit while charging and discharging.

Many of these revolutions are still far away, but scientists continue to reveal unique and fundamental properties of graphene that could inspire new applications. This time, researchers have found that lone-wolf electrons band together to behave like classical liquids we know on a macroscopic scale, violating a law believed to apply to almost all metals.

Something In The Way You Move

Understanding these new findings requires a brief exploration into how electrons act in most metals. Electrons carry both charge and heat as they move through an atomic lattice; these abilities are known as electronic and thermal conductivity, respectively. Higher conductivity means that the electrons carry charge or heat through the lattice more easily. At first glance, there seems to be no relationship between charge and heat transport, but this is not the case in metals. Instead, the electronic and thermal conductivity are universally connected through the Wiedemann-Franz Law. This means that in almost every metal, measuring how well electrons carry heat at a certain temperature can immediately show how well electrons transport charge.

This law applies so nearly universally because electrons act independently in most metals, ignoring the motion of surrounding electronic neighbors. This means that no matter what type of metal, electrons will generally behave in the same way—except in graphene.

In contrast to traditional three-dimensional metals, graphene stretches out in only two dimensions. Just as you would probably bump into your family more in a single-story than in a multi-floor house, electrons interact much more strongly in graphene because of this unique geometry. As researchers have now discovered, the interaction between electrons can become so strong in graphene that qualitatively different, fluid-like behavior emerges from these negatively charged particles normally blind to each other’s presence.

To study electrons in graphene, the Harvard researchers sandwiched a single sheet of graphene between two insulating layers of boron nitride, another two-dimensional material with a geometry similar to graphene. This clever experimental design preserves the pristine graphene sample without adding impurities or roughness that could change how electrons act.

With this geometry in place, researchers then applied an electric field that accelerates electrons through the graphene and creates an electric current. Heat was also injected into the graphene, creating a temperature difference between both ends of the graphene to create a thermal current. Measuring both of these currents, the researchers could determine the electronic and thermal conductivity for a range of temperatures.

The results show an amazing transformation in graphene. At very low temperatures, graphene behaved as any other metal, with a constant relationship between the electric and thermal currents that obeys the Wiedemann-Franz Law. However, as the temperature increased between 75 to 100 Kelvin (-198 to -173 degrees Celsius), the thermal conductivity increased dramatically faster than what would be expected within this law. Instead of acting as independent particles, the electrons interacted so strongly that they created collective motion like waves splashing through the atomic lattice, carrying heat through the lattice much more efficiently than would be normally expected.

“Instead of watching how a single particle was affected by an electric or thermal face, we could see the conserved energy as it flowed across many particles, like a wave through water,” Crossno explains.

Beyond 100 Kelvin, the surrounding lattice begins to vibrate with a significant amount of energy, disrupting this collective motion of electrons and reducing the thermal conductivity.

This novel behavior of electrons should have applications in both likely and unlikely places. This unusual deviation from the Wiedemann-Franz Law hints at better devices that could directly convert heat energy into electricity. Such an application could lead to shirts embedded with graphene that use body heat to power smartphones or iPads.

More surprisingly, this fluid-like behavior of electrons in graphene could also be linked to the dynamics of black holes. Since electrons in graphene move so fast, their fluid-like dynamics must be described using a combination of classical fluid theory and Einstein’s theory of special relativity, known as relativistic hydrodynamics. Black holes require the same theoretical treatment to model their dynamics properly.

“Physics we have discovered by studying black holes and string theory, we’re seeing in graphene,” says Andrew Lucas, another coauthor. “This is the first model system of relativistic hydrodynamics in a metal.”

From understanding black holes to improving thermoelectric devices, graphene continues to deliver new portals into physics that are difficult to find elsewhere in the world.

Crossno, J. et al. “Observation of the Dirac fluid and the breakdown of the Wiedemann-Franz law in graphene.” Science Reports, published online February 11, 2016.