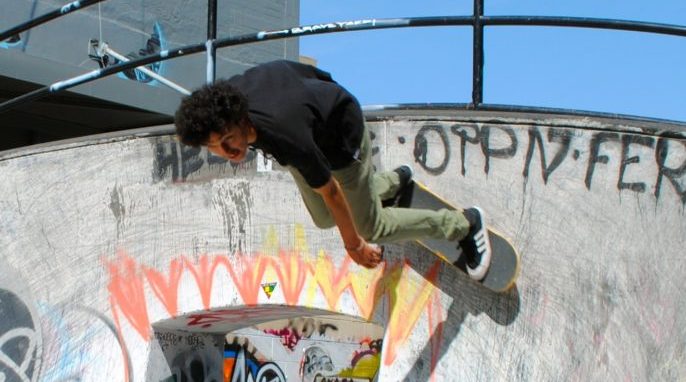 Skateboarding is physics! Find out what principles of physics a skateboarder uses to appear to defy gravity on the half-pipe.

People skateboarding might seem to defy gravity as they soar high above a half-pipe, but they are actually taking advantage of specific physics principles that help them reach such heights. Physicist Dr. Jonathan Trinastic explains.

Kate: As a physicist, what do you see happening in these photos?

Kate: So, how do these principles apply to the half-pipe?

Kate: In that case, how do skateboarders get so high on their jump, seemingly higher than their starting points on the other side of the half-pipe?

Kate: What does this have to do with the skater on the half-pipe?

RELATED: Waves of Physics: The Science of Surfing

Kate: That was a lot of good information. How can understanding physics help a skater successfully execute a half-pipe?

Jonathan: The short answer is that skateboarders can change their speed coming off the half-pipe by first crouching and then shooting straight up.

Kate: What is centrifugal force and how can someone use it skate up a wall?

Jonathan: Centrifugal force is actually a “fictitious force,” in that it’s actually not a physical force such as gravity or electromagnetism that is affecting you. Instead, the centrifugal force arises when considering dynamics from a rotating reference frame. All motion must be considered from some reference frame. If you are standing at your window watching a rabbit run across your lawn, then your frame of reference measuring the rabbit motion would be stationary—you at the window. The rabbit motion would look different if you were running away from it, for example, which would be a moving reference frame.

In the same way, as a skateboarder moves in a circular motion up the half-pipe, she is now in an accelerating reference frame, with a centripetal (not centrifugal) force pulling her toward her axis of rotation. A stationary observer would observe this force acting on the skateboarder. However, from the

skateboarder’s frame of reference, she feels a fictitious centrifugal force pulling her against the half-pipe wall, due to her inertia taking her in a direction tangential to her circular motion.

This centrifugal fictitious force is felt by anyone moving in circular motion. A common example is on spinning amusement park rides, which plaster us against the walls with nothing supporting us below. Although it feels like a force is pushing us into the wall, it’s really just the inertial motion from the circular path we take.

Kate: Are skateboarders defying gravity? Also, what is gravity?

Jonathan: Gravity is the force between any two objects with mass. Normally, we think of gravity between us and the Earth, but we actually have a gravitational attraction between us and any other thing around us: a tree, a water glass, a friend.

That gravitational force is just so weak that we don’t notice it. The only reason we feel the gravitational attraction to the Earth is because the planet is so massive!

Kate: What other physics principles do we see in skateboarding?

Jonathan: In addition to potential and kinetic energy, some energy is lost due to friction between the wheels and the ground during a skateboarder’s run. For this reason, she can’t go up and down the half-pipe forever skateboarding; over time, she will lose energy to friction, so she can’t maintain the same amount of kinetic energy, which in turn can’t be converted to the same amount of potential energy to reach such high heights on her jumps.

Photography of Lisa Fahncke, Justin Philip Nash, and others skateboarding by Kate Stone, SOMA Skatepark in San Francisco, May 2017.