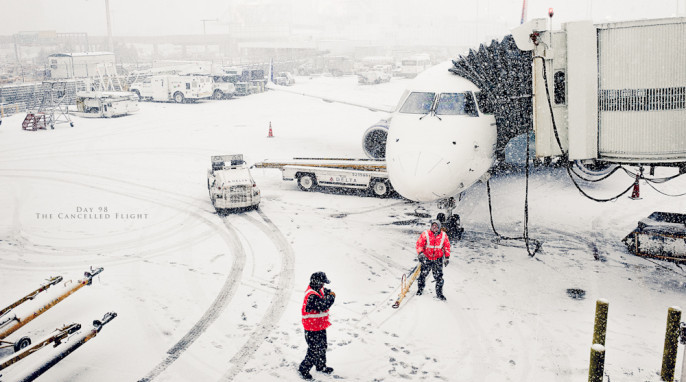 Every year, thousands of flights are delayed and thousands of car accidents happen due to snowstorms and icy road conditions. Millions of dollars are spent each year plowing and de-icing runways, tarmacs, roadways, and bridges. Salt and plowing cause damage to roadways and waterways, and shoveling heavy snow causes injuries and deaths.

Flight Delays (and Snow Days) Could be Things of the Past, Thanks to Science

The Federal Aviation Administration (FAA) is very interested in a special type of conductive concrete made by researchers at the University of Nebraska that could help prevent flight delays during wintry weather, potentially saving millions of dollars for travelers and airlines.

Researchers are testing a 200-square-foot slab of conductive concrete in Omaha, Nebraska, for its snow- and ice-melting powers. A bridge designed by the University of Nebraska’s researchers has been kept ice-free by conductive concrete since 2002, and they feel confident this type of concrete will work on a larger scale.

If the FAA sees the desired results from this study, they could start using it on the tarmac of an airport near you. But before declaring an end to all flight delays, it is important to remember that it will not be used on the actual runway yet.

Most airline delays come from ice and snow near the gates where the planes park, since refueling planes and loading and unloading baggage and supplies is difficult in wintry weather.

Self-de-icing pavement used on streets, driveways, and parking lots could be a thing of the near future. But don’t toss your snow shovels just yet. We still have a few good snow days off of school and work left in our futures!

Emily is freelance writer and blogger whose training and passions lie at the intersection of science and education. She has worked as an outdoor environmental educator, a science teacher, and a professional communicator and trainer. You can read her blog on serious science in a not-so-serious style at www.riseandsci.com and follow her on Twitter @riseandsci.