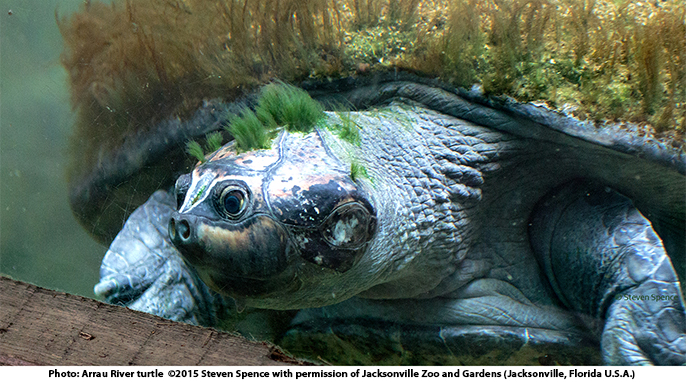 It began simply enough, visiting the zoo with my niece and her parents. They have a great love of animals. We figured, what better place to spend time together? While we were there I noticed a turtle with a green mohawk and photographed it through the glass of the tank. When I shared the photo on social media, people started asking questions, which led me to wonder why this picture had such an effect. As I researched, I realized understanding this question was perhaps a key to successful environmental outreach efforts.

The Turtle in the Photo

The turtle I saw at the Jacksonville Zoo and Gardens is known by several names, Arrau River turtle and giant South American turtle being the two best known. Its scientific name is Podocnemis expansa. According to Robert Mendyk, Supervisor of Herpetology at the Jacksonville Zoo and Gardens, the individual I photographed is a male approximately 12 years old that was hatched in captivity at another zoo. When I asked about the algae growing on its head, Mendyk responded:

While not commonly seen in captivity, many wild turtles accumulate substantial algal growth depending on the environment they are in, the time of year, and various other factors. This may be more common in some species, and could possibly serve as camouflage in some instances. Usually you’ll find algae growing on the shells of turtles, but, on rare occasions, you find it growing on their heads.

Out-of-Fashion Turtlenecks Can Be Hidden

Arrau turtles live in slow-moving waterways as well as adjacent lagoons and forest ponds. Their range includes the Orinoco Flow (River), the Amazon River Basin, and Trinidad and Tobago. They may grow up to one meter in length.

Arrau turtles are primarily herbivores, living on flowers, roots, fruits, and aquatic plants. They are also known to eat eggs and sponges and to scavenge dead fish. Predators of these turtles include jaguars, crocodiles, and humans.

Females are larger than males and may weigh up to 45 kg. Females often bask in the sun up to six hours a day prior to laying eggs. Much of the year the turtles are solitary in the wild. However, they do migrate and bask together during the nesting period. Hundreds of females have been sighted laying eggs on the same beaches at once. This behavior may improve the hatchlings’ odds of survival. Nests are pits between 70 cm and 100 cm deep, each containing 60 to 130 eggs.

Hatchlings’ sex is determined by the temperature at which the eggs are incubated; females emerge at higher temperatures. Upon hatching, the 5 cm long turtles race to the water, where they are met by mature female turtles. This is unusual, as hatchlings of most turtle species are typically left to fend for themselves.

Turtles That Flock Together: Scientists Solve the Riddle

“The giant South American river turtle is one of the most social species of turtle in the world,” says Richard Vogt of the Brazilian National Institute for Amazonian Research. “They migrate together, they nest communally, and they hatch out in huge numbers together.” When giant South American river turtles leave the water to dig nests and lay eggs, they do so in single file.

How do they do it? This organized behavior, with no obvious communication, had always puzzled Vogt. Since turtles have no vocal chords and their ears are internal, scientists didn’t think they could hear well at all. Vogt set up hydrophones and analyzed 220 hours of recordings to demonstrate the first evidence of parental care in turtles.

Female Arrau turtles wait in the water near the nests for two months until the hatchlings emerge. The adult turtles communicate with each other and with the hatchlings using low-frequency sounds. The females call out for the hatchlings to come to them, and then the group moves into the flooded forests where the hatchlings can grow in relative safety. At this time, scientists don’t know if the hatchlings belong to the female caring for them, or if females simply accept any hatchlings that come their way.

Life really can be difficult when you’re green, whether due to algae on your head or because you’re a frog. Turtles and other animals with a land-water life cycle don’t have it easy. In fact, they are considered indicator species for wetlands.

What is an indicator species? It is a species that defines a trait or characteristic of the environment. It is the proverbial canary in a coal mine for a particular ecosystem. Herptiles, defined by the Environmental Protection Agency (EPA) as turtles, frogs, salamanders, snakes, crocodilians, and some lizards, act as especially good indicator species for wetlands. Several factors make herptiles sensitive to the ecosystem. Foremost among these factors is their aquatic-terrestrial lifestyle, which regularly exposes them to two different environments.

Frog eggs are permeable to the water around them and therefore sensitive to pollution in the water. Adult amphibians also absorb chemicals from their environment through their skin. Reptiles may build up high concentrations of toxins through consumption of polluted prey. As seen with the Arrau River Turtle, reptiles may also respond sensitively to variations in temperature, which can lead to a surplus of one sex or the other developing. Sometimes, temperatures change so much that few or even no eggs hatch.

In part 2 of this series we’ll look at cuteness as a secret weapon, meet the best-looking turtle in the world, and close the loop on successful environmental outreach efforts.

Special thanks to Robert W. Mendyk

Conservation Efforts at the Jacksonville Zoo and Gardens

This year alone, the Jacksonville Zoo and Gardens has funded several international field conservation projects and initiatives focusing on threatened and endangered turtles, and is sponsoring an upcoming conservation and research symposium on the critically endangered Central American River Turtle in Belize. Here at the zoo, the JZG is an active participant in the Species Survival Plan for the pancake tortoise, and has successfully produced offspring of this species for the past three years. We are also investigating the behavioral repertoire and reproduction of the Central American River Turtle here at the zoo.