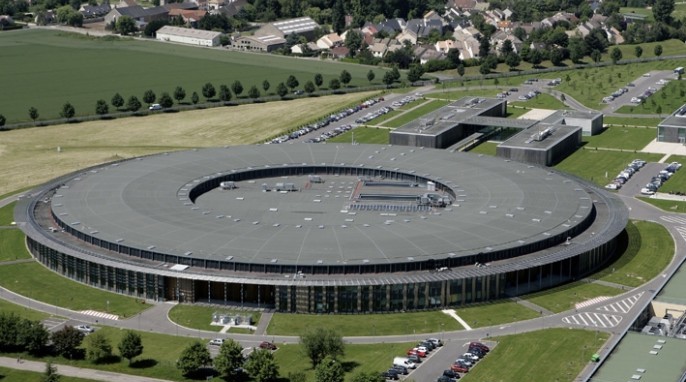 Florian Celli is a PhD student of biophysics in the Center for Atomic Energy (CEA of Saclay) and the Synchrotron SOLEIL in Paris. He uses nuclear magnetic resonance to study protein dynamics in order to understand their biological role. He co-writes 2 Steps From Science, a website of general science in French and English for students and science fans. Follow on Twitter and Facebook.

I am going to talk about architecture, but I am not an architect. I am going to talk about movement, but I am not a dancer. As a researcher in biophysics, I am interested in the molecules of which every living creature is made. Every one of us is made of proteins; in fact, proteins comprise 17 percent of your body. These proteins are involved in many different processes that allow our cells to divide and multiply, our DNA to be translated, and our genome to be protected.

Several years ago, scientists discovered that proteins’ tridimensional (3D) structure plays a predominant role in their functioning. Indeed, most of the time when two proteins interact, it is a bit like inserting a key into a lock. The two shapes are perfectly matched to one another. With this knowledge, scientists have recently improved techniques such as electron microscopy, giving us close-up views of viruses.

How Do You Look at a Protein?

But viruses are composed of hundreds of proteins, so scientists needed to delve further to really understand them. This led to the use of X-ray scattering to get images of protein crystals. X-ray scattering has become the most widely used technique to study the molecular structure of proteins, but it has some drawbacks. First of all, we need to produce a lot of proteins to obtain a crystal. This is tricky, because many proteins are too floppy to allow crystal formation. For this reason, we were unable to study certain proteins for many years. Moreover, obtaining a crystal requires testing many conditions for the studied proteins, and as there is not a set procedure for that, it is a large amount of work. Last but not least, when obtaining the precious snapshot of the protein using a particle accelerator—or synchrotron—the sample is destroyed in the process, which is a real problem since the sample is very difficult to produce and usually very expensive.

Usually, to produce a protein, scientists introduce a DNA strand—coding for the protein of interest—into bacteria. The bacteria then absorb the DNA strand and become able to produce the particular protein. The bacteria grow and multiply in a special growth medium, and once the bacteria population is big enough, their membranes are broken to release the protein contained inside of them. The cells’ remains, mostly membrane debris, are then eliminated by centrifugation of the sample. The larger, heavier, debris form a pellet at the bottom of the tubes, while the protein, which is soluble, remains in the liquid. The next step is purification of the protein of interest in order to use it for further experiments. Unfortunately, things are not that simple for NMR samples.

NMR involves using atoms that have a non-zero spin so that these atoms can be excited by an electric field to a higher energy level. Then, we detect the way they come back to equilibrium. A non-zero spin atom inside a magnetic field will have local magnetic fields coming from the interaction between the way electrons are moving and the strong magnetic field coming from the magnet. Moreover, two particles with a non-zero spin that are in close proximity to each other will have their local magnetic field shifted. We will then have an idea of how close together they are and what their chemical environments are. Since proteins are mostly composed of hydrogen, nitrogen, and carbon, we use these atoms to do our NMR experiments. Hydrogen is an atom that natively has a non-zero spin, which is great for our purposes. But for nitrogen and carbon, we face an issue: The most abundant isotopes have a zero spin. Fortunately, two compounds—ammonium chloride having a non-zero spin nitrogen atom and glucose molecules having a non-zero spin carbon atom—have been produced. With these compounds, we can perform NMR on proteins, giving the compounds as the only source of carbon or nitrogen to the bacteria. As the bacteria grow, they use the special nitrogen from the ammonium chloride and the special carbon from the glucose molecules to build proteins. After purification, we have our protein of interest optimized for NMR.

To do our NMR experiment, we place the purified proteins on the magnet and we pulse our sample with an electric field. This stimulates the atoms to a higher level of energy. Then, after stopping the pulses, we let the atoms come back to their equilibrium state. The way they return to equilibrium gives us information about their spatial and chemical environment. We are then able to apply spatial constraints for all of these atoms and we can compute these constraints to model  the 3D structure to get the same result as with X-ray scattering.

A Future Without Alzheimer’s?

You might ask, why is NMR so important? Good question! Thirty years ago, scientists discovered that not all proteins are structured. Some of them are naturally disordered. We call these IDPs: Intrinsically Disordered Proteins. The striking feature of these proteins is that they cannot be studied by X-ray crystallography because they are too dynamic and too floppy. NMR, however, can give dynamic information about protein movements. This is the reason why NMR became the most widely used technique to study IDPs. NMR allowed scientists to better understand the mechanisms of IDPs, and now we know that these proteins are very useful; they can interact with a lot of partners because of their lack of structure. They can form filaments, they are easily accessible to post-translational modifying enzymes, and they are the targets of specific pathways that were not known before.

Normal proteins have to fold to become active, but for IDPs this is not necessary. These proteins are natively active, meaning that they can be used quickly, so they are a very good way for organisms to react to a given situation—an external stress, for example. Other IDPs, such as a protein called alpha-synuclein, are known to be involved in diseases. Specifically, alpha-synuclein plays a role in Alzheimer’s disease. There are still many exciting things to discover about IDPs, which will be made possible by NMR. Research in the field of IDPs focuses now on their regulation, the way they are involved in diseases, and how their dynamism can lead to cures.