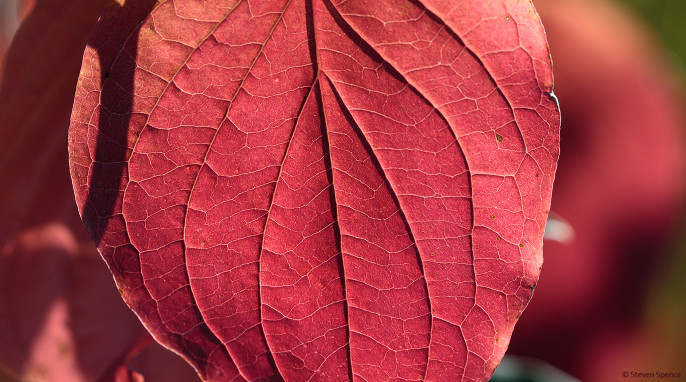 Going Out in a Blaze of Glory

Fall is my favorite season for many reasons, but foremost among them is the joy I feel when surrounded by thousands of patches of light in a cacophony of colors all rustling in the wind. There are only a few special weeks each year to enjoy this transition from the searing heat of summer to winter’s icy grip.

Whenever something captivates my imagination (or optic nerves) I want to learn more about it. Often that involves a series of questions. I immerse myself in the topic, finding unexpected connections. Today it’s my pleasure to share a few of those questions and what I learned.

Whether or not being green is easy is debatable, but we generally take it for granted that leaves are green. They have this green color due to chlorophyll (Greek: green leaf). Chlorophyll is key to photosynthesis, the conversion of carbon dioxide and water into sugar and oxygen through the power of light. A generic reaction is:

Although we typically think of plants as having green leaves, being green is not a requirement to perform photosynthesis. You may have seen some trees, shrubs, or other plants with reddish-purple foliage. These plants have another pigment, anthocyanin (Greek: flower blue), in more abundance than chlorophyll. Anthocyanin compounds are also efficient at photosynthesis.

Chlorophyll is good at absorbing blue and red wavelengths, but comparatively poor at absorbing green. Therefore, leaves reflect light primarily in the green part of the spectrum.

If ET Sends Us a Postcard

We take it for granted that plants have green leaves for photosynthesis, but green vegetation may be a reflection of the solar spectrum on the Earth. Our sun is a G-class (yellow) star, which emits a peak spectrum in the visual range. Additionally, the Earth’s atmosphere has a significant effect on the light reaching the ground, making it ideal for plants to absorb in blue or red.

What if we discover a habitable planet around a different star? NASA and CalTech have already looked into this possibility.

On a planet orbiting an F-class (yellow-white) star, which is somewhat hotter than the sun, photosynthesis will most likely concentrate on blue and green wavelengths, because that’s where the energy peak will be. Leaves there will reflect mostly in yellow, orange, and red. It would be “fall” year-round, at least based on the coloration of Earth’s vegetation.

On a planet orbiting an M-class (red dwarf) star, the peak will be in the infrared. There will be less blue or green light than on Earth. Vegetation will probably shift to absorb mostly in the available visible range and the infrared. Plants would appear very dark or even black on such a planet.

What about on Mars? Mars’ atmosphere is not blue like the Earth’s. Dust particles scattering light and argon in the atmosphere shift it toward red. During the Martian day the sky is a butterscotch color, so if we ever found plants there, we could expect them to prefer absorbing in yellows, reds, and infrareds. They would probably reflect back a dark green.

Back Down to Earth

With fall-color displays catching our eyes in the Northern Hemisphere, let’s look at why leaves transition from green to yellow, golden, orange, or red.

The colors yellow and orange are explained relatively easily. As we’ve seen, chlorophyll isn’t the only compound that can absorb light for photosynthesis. Carotene, especially beta carotene, is a common pigment in plant cells. It helps mitigate the destructive effects of ultraviolet radiation. Carotene compounds also help absorb energy in the blue-green frequencies, which complements the chlorophyll in increasing absorption of light by the leaf.

As the length of daylight begins to grow shorter, plants start forming a layer of cork cells at the base of the leaf. The cork gradually seals off the leaf, reducing the flow of fluids and minerals into the leaf. Chlorophyll breaks down in leaves due to ultraviolet light, but during the growing season it is constantly replaced by the plant through the fluid flow. As the fluid flow is reduced, the chlorophyll breaks down faster than it is replaced. The leaf gradually loses its green color.

Red Is a Whole New Ballgame

Red leaves take a different trajectory. Unlike the bashful yellows and oranges, which have to wait for the ubiquitous greens to fade away, anthocyanins (red pigments) are manufactured beginning in late summer. The availability of phosphate is key to their formation. During the growing season phosphate is abundant, but as the fluids and minerals supplied to the leaf are reduced, the process to break down sugars changes; anthocyanins are produced as a result. Cool, sunny days are ideal for these processes and result in bright red displays.

Can We Predict Peak Colors?

Since we know that the length of daylight and temperatures are factors in fall leaf coloration, it should be possible to predict when the leaves will reach their peak colors in a given area. I say  “should”, because the track record isn’t great, but it is getting better. The US National Oceanic and Atmospheric Administration (NOAA) ran a fall foliage prediction using satellite data in 2014. I’m not aware of such a program in 2015; however, there are various websites with national and regional forecasts. The Travel Channel has one such forecast covering the United States.

While we’re predicting, some scientists are already extrapolating trends. As average temperatures continue to climb, fall foliage colors may peak later in the year. Researchers at Princeton determined that the effect was most pronounced in warmer areas. Thus, even if average temperatures increase only a degree or two by the end of the century, Alaska’s peak will likely remain in September while Massachusetts’ peak may shift from October to November.

Autumn Leaves Out and About

No matter when the colors reach their peak where you live, these processes take time to build to a chromatic crescendo and to ebb away. Generally, there is a window of several weeks to enjoy colorful foliage in most temperate regions. As a photographer and lover of nature, I say drinking those colors in is just as important as understanding how they manifest themselves.