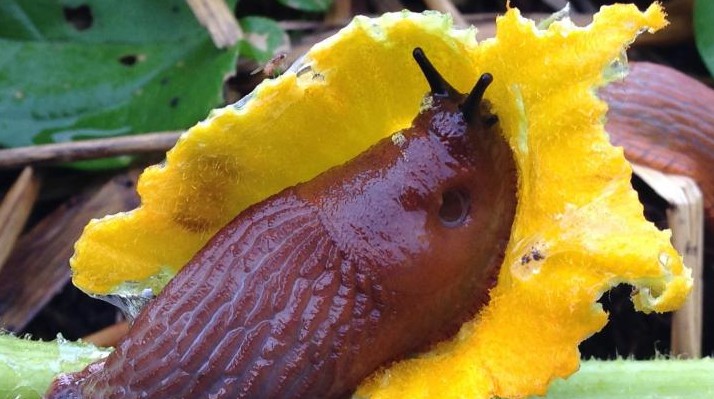 Nematode Worms on the Move

Buses and trains may not always be the cleanest ways to get around, but at least they aren’t as messy as slugs, which are a mode of transit in our gardens. According to a new study, slugs and other invertebrates provide essential public transport for small worms in search of food.

Nematode worms (including Caenorhabditis elegans) are about a millimeter long and often live in temporary environments, such as a piece of decomposing fruit or other rotting plant material. Because their habitats come and go, the worms frequently need to move to new locations, but how does such a small animal with limited mobility travel long distances to find new food?

You Wait Forever for a Slug, then Two Come at Once…

Searching in gardens and compost heaps, a team of researchers collected over 600 slugs, and over 400 other invertebrates including flies, centipedes, spiders, beetles, and locusts. The team discovered that nematode worms are commonly found inside the guts of slugs, woodlice, and centipedes. When the time comes to move on, the worms invade the guts of of their hosts proliferate within the intestines, and are later excreted alive and well.

“Even though nematode worms are one of the most intensively studied organisms in almost all biological disciplines, we still have very little understanding of their natural ecology. Our study reveals a previously unknown nematode lifestyle within the guts of slugs. The worms appear to have evolved to persist in the harsh environment of slug intestines, similar to a symbiont or even a parasite,” explains Hinrich Schulenburg from Christian-Albrechts-Universität, Germany.

As the worms enter and leave the slug without any obvious harm to either party, scientists think this may be a harmless interaction that, at least, is of benefit to the nematodes. However, the authors say that further research is needed to rule out a parasitic association, which could be have detrimental effects on the slug’s intestinal bacteria.

This research is published in the open access journal BMC Ecology.