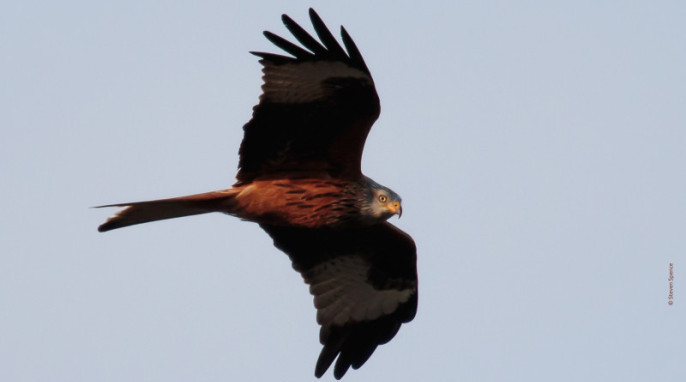 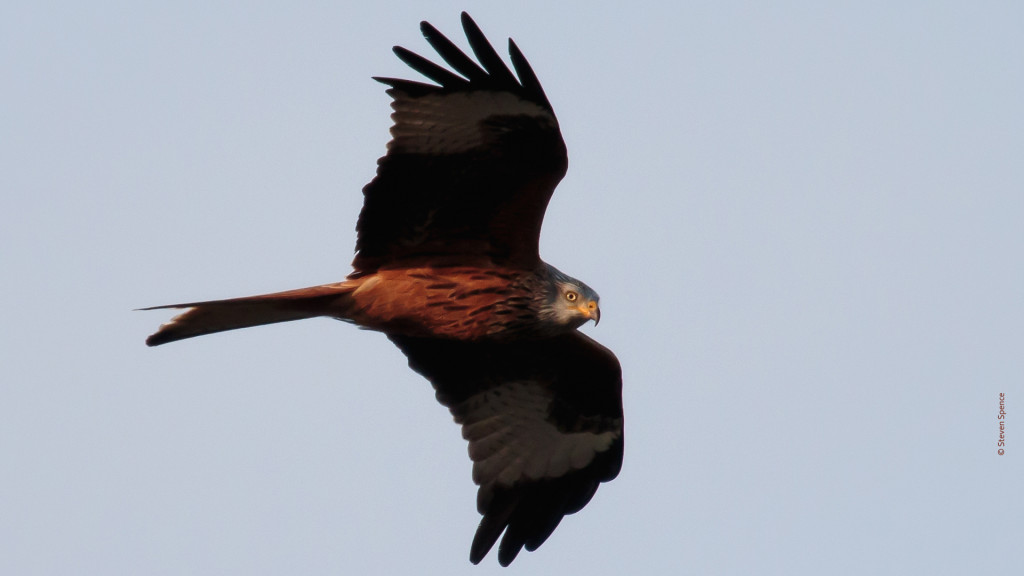 Photography and Text by Steven Spence

This is a wild red kite (German: Roter Milan; Latin Milvus milvus ), which lives mainly in Germany, Poland, France and Spain, but is seen in other parts of Europe. Black kites (German: Schwarzer Milan; Milvus migrans) are more widespread and more often encountered.

Estimates suggest there are approximately only 19,000 to 25,000 breeding pairs of red kites in all of Europe (~12,000 in Germany). Thus, today’s photo is a relatively special treat.

The population of black kites is estimated at approximately 6 Million individuals across Europe, Asia, Africa and Australia.

In flight, the two birds look similar, although the red kite is larger. Unless a black and a red kite are flying at a similar distance, judging the size can be tricky. Without good light, it can also be difficult and to identify them based on their respective red and black colors. However, the tail is quite distinctive and easy to see in flight.

The tail of the local buzzards (Common buzzard; Mäusebussard; Buteo buteo ) is somewhat rounded with the feathers in the middle being longer than those on the sides. The black kite’s feathers in the center of its tail are slightly shorter than the outside tail feathers, whereas the central tail feathers of the red kite are noticeably shorter and create a distinctive  “V” shape. It’s very interesting to observe how the red kite uses its tail to make turns.

While the red kite is an active hunter, black kites tend to eat more carrion and more fish. Typically, a red kite is a systematic hunter and it flies slowly over an area searching for small mammals (rats, mice) and attacks suddenly from a high altitude. They will also attack crows, and it was by following the distinctive ‘caw’ of crows that I found the kite you see in this picture.

I’ve been going out regularly looking for my raptor friends, but despite seeing many, it has been challenging to get close enough for a decently sized shot. I usually use an EOS 7DMkII (great autofocus) and an EF 100-400 mm f/5.6 lens. But even with the 7D crop factor of 1.6x, giving an equivalent of 640 mm focal length, the birds are just too far away and too small to be good subjects. Last week I finally gave in and bought an extender (1.4x), which lets me shoot at 896 mm equivalent. A combination of good luck, decent sunlight, and the extender let me get a much larger shot this time.