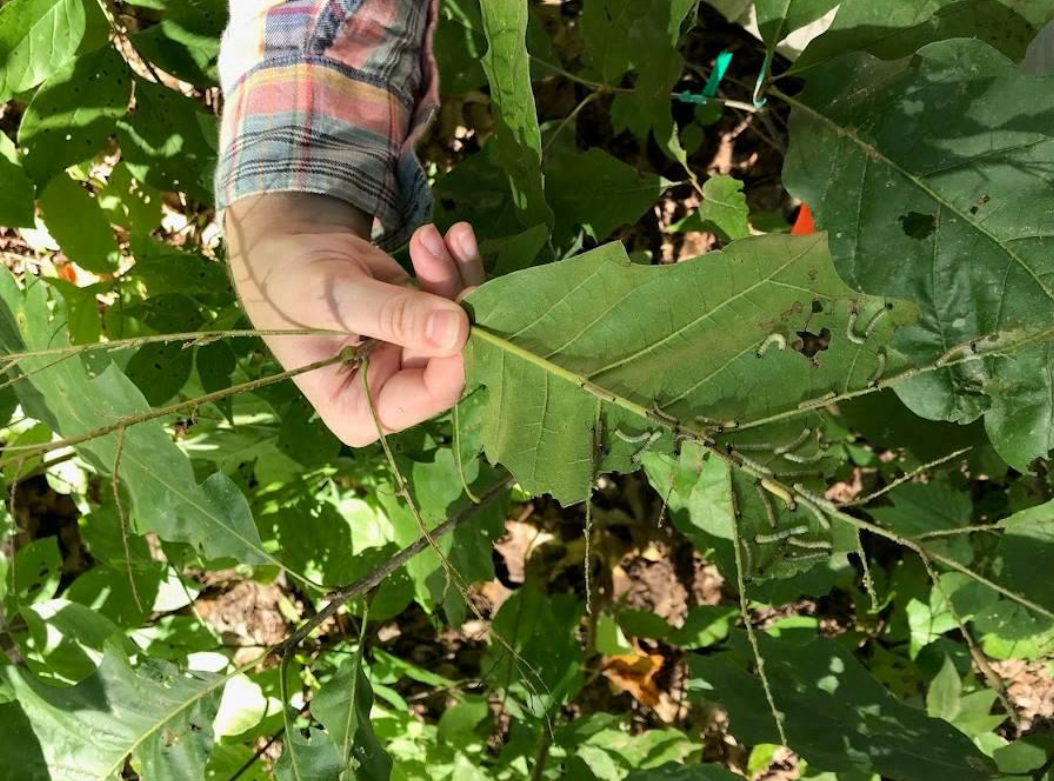 Bats play an important role in forest ecosystems because of what’s called trophic cascades: they eat insects that eat trees.

Bats likely influence the overall structure, health, and composition of vegetation in forest ecosystems. By consuming insects that feed on certain tree species, they may lower these trees’ mortality rates and increase their competitive advantage.

Trophic cascades are indirect interactions that happen in many ecosystems. They occur when a predator suppresses the density of its prey and, consequently, increases the density of the next trophic level—the position a species occupies within the food chain. For example, a trophic cascade would occur if bats, which prey on insects, consumed enough insects to cause a significant reduction in the number of insects preying on plants. By reducing the population of insects that are preying on plants, they are indirectly helping the plants’ population to grow. This is a trophic cascade in action. In this example, bats occupy the highest trophic level, and, by preying on insects one trophic level below themselves, they cause a cascading effect that influences not just the insects’ trophic level, but the trophic levels below the insects as well. As such, it is widely accepted that predators influence the type and abundance of vegetation seen in certain ecosystems.

Defoliation is defined as the relative loss of leaf matter over a defined period of time. In order to grow and survive, a plant needs healthy leaves. Thus, defoliation is unwanted and puts plants at a competitive disadvantage by lowering their growth and vigor. When predators reduce defoliation, they affect the structure and composition of the forest by helping plants compete.

Bats are key initiators of trophic cascades because they possess certain traits that allow them to regulate prey populations. For example, their general activity and feeding rate increase with higher prey density. Through the use of echolocation—the emission of high frequency sound waves that act somewhat like radar—bats are able to hunt prey effectively. Previous studies have demonstrated that bats prompt trophic cascades in agricultural pests, such as corn earworm and cotton bollworms; these cascades indirectly benefit the crops by increasing crop quality and yield.

Bats are highly reliant on forests for foraging and roosting. However, most forest defoliator studies have investigated only the role of birds and excluded bats. Interestingly, bats consume numerous forest-defoliating insects, including moths, beetles, true bugs, crickets, and katydids.

At the University of Illinois, researchers wanted to investigate the role of insectivorous (insect-eating) bats in reducing insect density and forest defoliation ultimately resulting in a trophic cascade. The researchers created 20 experimental units; each experimental unit consisted of a bat-excluded forest plot and a control forest plot. Bat-excluded plots were surrounded by a netted exclosure and the control plots were netless. The researchers wanted to answer three questions:

Because trophic cascades caused by bats had been observed in other ecosystems, the researchers predicted that bat-excluded seedlings would have a higher insect abundance and suffer significant defoliation compared to the defoliation observed in the control seedlings. The researchers also hypothesized that bat presence would have a greater impact on oaks than on hickory trees, as oaks are home to more insects that bats prey on.

The University of Illionois’s study was conducted over three years in the Yellowwood State Forest in south-central Indiana. This forest is home to eight bat species, including the eastern red, Indian, and big brown bat. The main defoliators in this ecosystem are moths, beetles, true bugs, and crickets.

The study’s results demonstrated that defoliation was five times higher in the bat-excluded plots than it was in the control plots. Additionally, they had a greater impact on oak seedlings than on hickory seedlings. Oaks experienced nine times more damage in netted plots (where bats could not prey on insects) than in netless plots; hickories experienced three times more damage in netted plots than they did in netless plots. The researchers also noted a significantly higher insect density in the netted, bat-excluded plots.

Next steps for bat researchers

Bats were excluded from certain plots to determine their impact on forest ecosystems. The netless plots, or control plots, had a significantly lower rate of seedling defoliation and a lower insect density. These results suggest that, by influencing trophic cascades, insectivorous bats play a key role in determining the structure of forest ecosystems. And, by consuming more insects on oaks than on hickories, they may be giving a competitive advantage to certain tree species.

Since there is a global decline in bat populations, forests may be impacted by reduced their predation. This study emphasizes the importance of bat conservation. The loss of bat populations may be a factor in the recent decline of oaks in Eastern America. Moreover, by preventing defoliation on seedlings, they keep seedlings healthy, preventing the spread of pathogens and allowing trees to grow without damage.

More research is needed, including similar studies that investigate how the presence of birds affects bats’ role in forest ecosystems. For now, increased awareness of the important role that they play in forest ecosystems is crucial to forest and bat conservation.

This study was published in the journal Ecology.

Auriane Flottes de Pouzols is a recent graduate from the University of British Columbia with a BSc in Zoology. She has a passion for biodiversity and conservation.