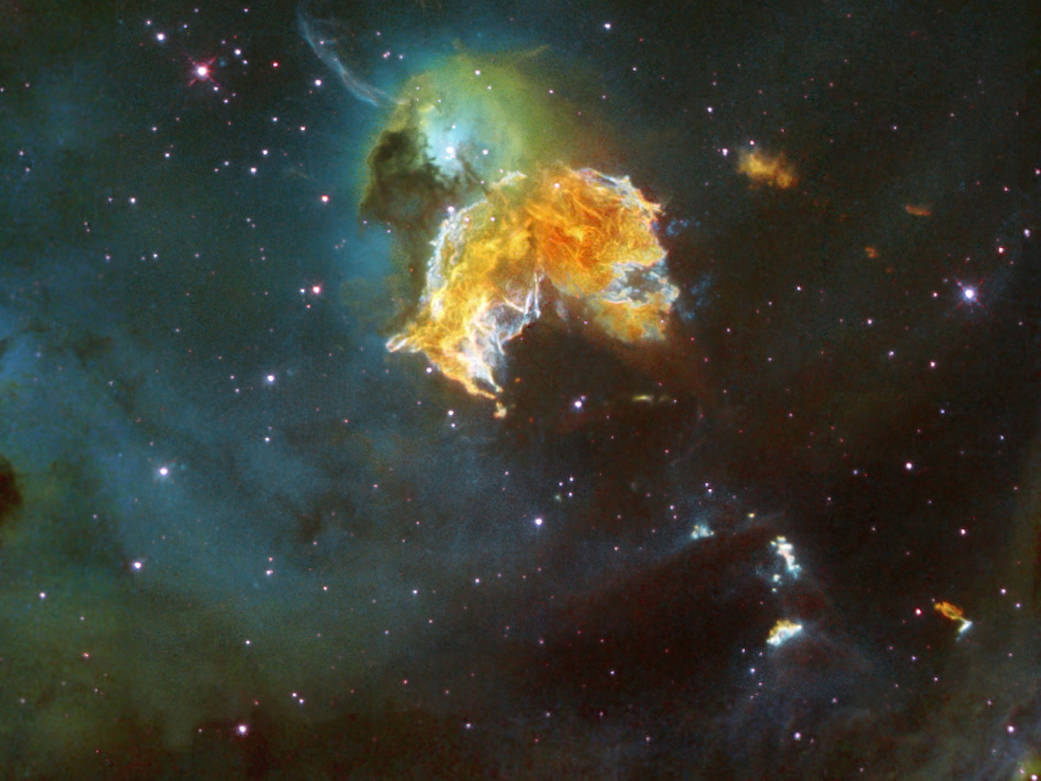 Astronomy and Astrophysics Physics There Be Dragons Everywhere

Steven Spence looks for a recipe and discovers the oven at the beginning of the universe. Welcome to neutrons, the early universe, and apple pie.

Due to the COVID-19 lockdowns, I have worked from home for over a year. That also has meant cooking lunches. I noticed that looking up a recipe on the internet often means scrolling through long stories where the author relates how her grandmother made a dish with vegetables from her garden. Usually, anecdotes are liberally sprinkled in, requiring either patience or scrolling through multiple pages before finally getting the recipe.

I wanted to write a short post about a famous quote from Carl Sagan but discovered I had to scroll back to the beginning of the universe to understand the composition of something as mundane as apple pie. Fortunately, I learned a lot along the way.

“If you wish to make an apple pie from scratch, you must first invent the universe.”

How Did my Curiosity Lead to Recipes for the Universe?

I am intrigued by neutrons. There is something inherently unstable about them. They make me wonder about the nature of protons, neutrons, quarks, and gluons. I feel understanding neutrons can be one approach to understanding more about matter. [Disclaimer: these are my thoughts and not science. We will cover the science first. A future post may cover some of my musings about the nature of neutrons.]

I am also interested in where the different elements come from, which make up everything around us: everyday items like matches, a knife, an apple pie, a car, a piece of jewelry, etc. All of them have very different origins and compositions. Following one question after another led me to wonder how we even have carbon, iron, lead, gold, or uranium. What I found was there is no one source, and many of the processes creating elements are spectacular.

“In the beginning there was nothing, which exploded.”

For the first step in Carl Sagan’s apple pie recipe, we need to invent the universe somehow. Georges Lemaître’s “Big Bang” theory is currently the best explanation we have for the universe as we know it.(1) In his theory, all the matter constituting today’s universe was initially compressed in a singularity of incredible density and energy. This singularity “exploded” and rapidly expanded space. As the universe expanded, the pressure and temperature of the original matter fell rapidly, allowing particles to condense out of the “hot mix.”

By “hot,” I mean a temperature of somewhere above 2 Trillion (2 x 1012) °C. “Mix” refers to a state of matter we cannot fully reproduce with our current accelerators. This state of matter is a fluid described as a quark(2)-gluon(3) soup. In these initial moments of the Big Bang, both quarks and gluons moved freely near light speed.

We have some insight into this primordial state of matter through experiments at two high-energy colliders: Brookhaven National Laboratory’s Relativistic Heavy Ion Collider (RHIC) and Cern’s Large Hadron Collider (LHC).

It is Snowing Matter

As temperatures in the early universe fell, the first elementary particles composing everyday matter condensed out of the hot soup. I like to imagine this phase as quarks and electrons “snowing.” Shortly after quarks condensed out, they became bound by gluons (strong nuclear force) and formed the first protons and neutrons.

Protons, neutrons, and electrons are the basic units of atoms. There are many more particles, but these three are sufficient for us to describe and understand elements.

What is an Electron?

An electron is considered a fundamental particle in the lepton family. Electrons are not known to have any internal substructures (unlike protons or neutrons) and are thus considered “fundamental.” A lepton differs from protons and neutrons in not being affected by the strong interaction (nuclear). Electrons are an example of charged leptons. An electron has a negative charge. Another lepton you may have heard of, neutrinos, are an example of leptons with no charge.

“It was quite the most incredible event that has ever happened to me in my life. It was almost as incredible as if you fired a 15-inch shell at a piece of tissue paper and it came back and hit you.”

–Ernest Rutherford describing a 1909 experiment isolating the nucleus of a gold atom for which he won the Nobel Prize.

Up, Down, Turn Me Around

Protons and neutrons are both particles in the hadron family. Unlike electrons, they are not fundamental particles because they consist of smaller components known as quarks. Specifically, protons and neutrons are type of hadron classified as baryons because they are composed of an odd number of quarks. Hadrons consisting of an even number of quarks are classified as mesons.

Protons and neutrons form the nucleus of atoms. Protons are positively charged. Neutrons, as their name implies, have no electrical charge.

Roughly one second after the Big Bang, temperatures dropped enough for neutrons and protons to form out of quarks and gluons. Initially, the rate of formation was approximately one neutron for every proton. As temperatures continued to fall, more protons formed preferentially due to having a slightly lower mass than a neutron. Additionally, some of the free neutrons decayed into protons. At the end of this period, the ratio was approximately one neutron for seven protons.

Elements began forming in the early universe after approximately 10 to 100 seconds. Mathematical simulations indicate most of the initial elements formed in the first three minutes after the Big Bang. After thirty minutes, the initial ratios of elements were “baked” into our recipe for the universe. The process of the early formation of elements is known as primordial nucleosynthesis. It established the starting ratios of hydrogen, deuterium (hydrogen with a neutron), helium-3 (helium with only one neutron), helium, a smidgen of lithium, and traces of beryllium. Approximately nine hydrogen nuclei formed for every helium nucleus during this early phase of the universe.

“So the graduations hang on the wall

But they never really helped us at all

No, they never taught us what was real

Iron and coke and chromium steel”

How to get from Hydrogen and Helium to Iron and Coke?

A great question! At this point, we have described an early universe full of nuclei for light elements. As more time passes, matters continued cooling down enough for electrons to be captured by the nuclei. Our early universe consists of a short list of elements:

How do we get elements 6 (Carbon) through 26 (Iron)? Or to the ingredients for an apple pie? Check back for the next post in this series, where we will dive into the heart of stars.

PART 2: Forged in the Hearts of Stars

PART 3: Elements, Heavy Metal, and the Death of Stars