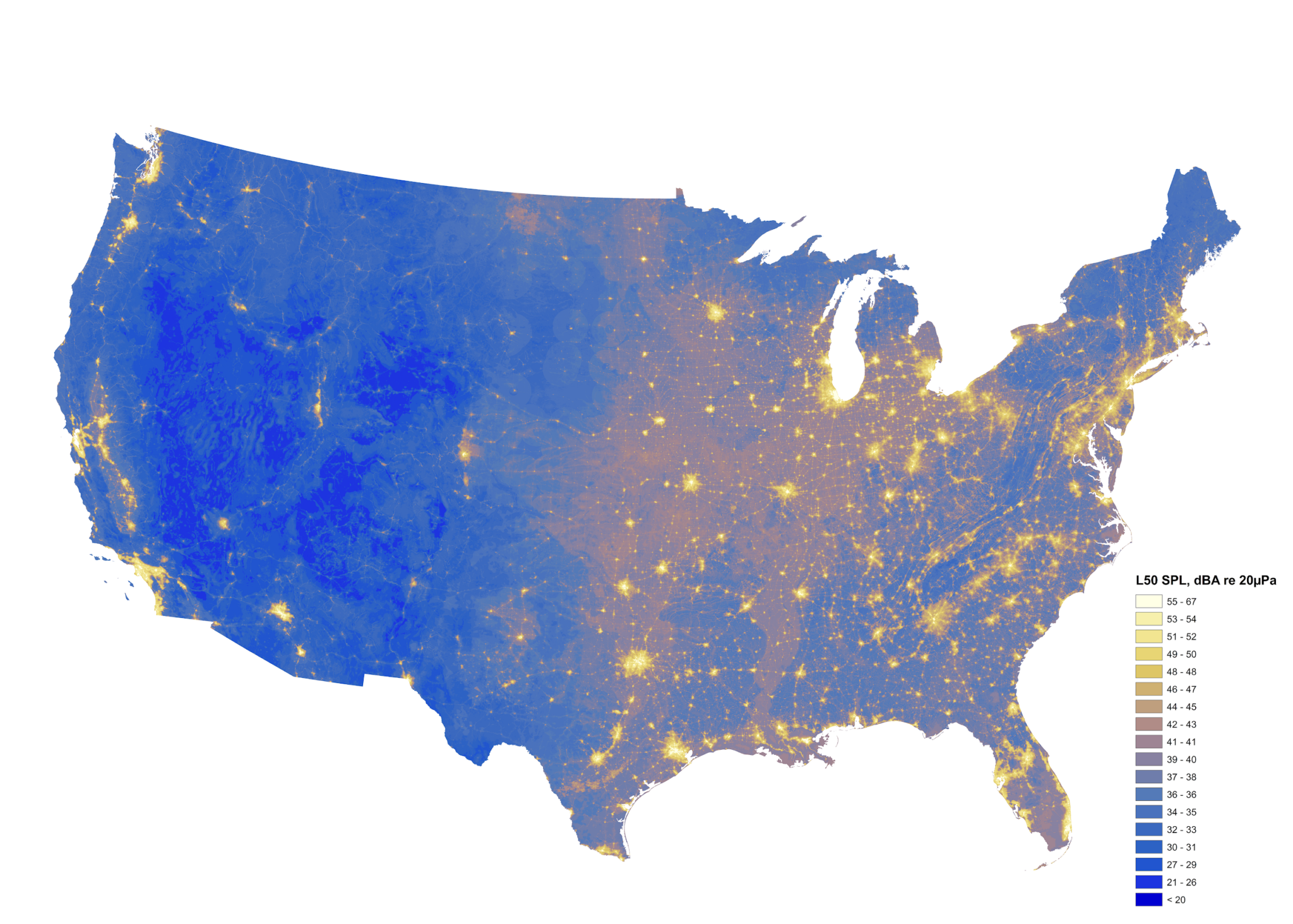 At the start of World War I, thousands of soldiers were coming down with a baffling condition: they became blind, deaf, lost their memory, or developed uncontrollable shaking despite no obvious physical injury. Even stranger, this malady could be triggered by memories of the war even after the fighting had ended. At the time, doctors called what they were seeing “shell-shock,” though today we would call it by a different name: post-traumatic stress disorder. Anything that brought back memories of the trenches could precipitate this condition, but one of the most common triggers was loud noise. An engine backfiring, a firecracker on Independence Day or, in at least one case, simply speaking the word “bomb,” could cause afflicted soldiers to become catatonic or act out memories from the war. All this, the result of a sound.

Noise pollution is a problem

Clearly, sound can have a dramatic effect on our bodies and our minds. But it doesn’t have to be linked to memories of trauma to affect us. Indeed, studies have shown that even exposure to seemingly innocuous sound can impact our health. Low volume, low-frequency traffic noise, for instance, is linked to all sorts of health consequences including poor sleep quality, difficulty concentrating, and even cardiovascular problems.

As a result, we now recognize negative sounds as a specific class of pollutant: noise. Noise pollution is the propagation of unwanted sounds in an area. And even though noise doesn’t leave a chemical trace like gas from a smokestack or sludge from a pipe, it affects our health in a similar way. For this reason, the US National Parks Service (NPS) decided to study noise pollution to determine how it is distributed across the country. Much like the Environmental Protection Agency (EPA) uses air and water quality monitors to measure conventional classes of pollution, the NPS’s Natural Sounds and Night Skies Division deploys sensors to record levels of noise. In 2013, they mapped the results of this work across the entire continental US, showing areas of highest and lowest noise pollution.

But the NPS had a problem. They were only able to deploy sensors on federal land or in places where they had express permission from property-owners to do recordings. This left large swaths of private property, particularly in urban and suburban residential areas, without precise data. Researchers at North Carolina State University created a citizen science project called “Sound Around Town” to fill in this gap.

Documenting noise with Sound Around Town

The first purpose of Sound Around Town is to document the distribution of noise pollution in residential areas to a finer grain than the NPS was able to. Sound Around Town works directly with community members that agree to deploy sound sensors in their backyards so the team can record decibel levels and other sound characteristics. After two weeks, the team retrieves the sensor and the recordings are sent to the NPS for analysis. The sensors themselves consist of a weatherproof box containing the recording equipment and what looks like two antennae tipped with fluffy spheres called “windscreens” that contain microphones that record multi-directional sound.

Brittany Carson is a graduate student at North Carolina State University and the Sound Around Town project leader. She studies “sense of place:” how people make sense of where they live and how that affects their life and behavior. She works with and recruits the Sound Around Town participants alongside a team of other students as part of her research.

One of the Sound Around Town project volunteers is Betty-Jean Brodie Thompson. Ms. Thompson has lived in the Rochester Heights community of Raleigh, North Carolina ever since it was founded more than 60 years ago as an exclusively African-American neighborhood during segregation. Since that time the community has changed a lot, and so has its soundscape. “When I got here it was very, very quiet, and then we got bus service out here. We hear the sounds of the bus every morning,” she said. “And here lately we have different people… new people coming in and we have motorcycles coming through Biltmore Hills pretty fast, coming down Hatley Road. In the summertime, it seems to be a lot of noise. I hear the sound of the train that comes about 5 or 6 o’clock in the morning.”

That Ms. Thompson is affected by the noise in her community’s soundscape is no surprise. While the project is still in its early stages, the team expects that the distribution of harmful noise levels will follow the same pattern seen with other types of pollution; they will be disproportionately concentrated in communities of color.

People have long recognized that marginalized communities are overburdened with our nation’s environmental contamination. Time and again, when researchers measure air quality, water quality, climate change impacts, lead exposure, and other aspects of environmental contamination, they find that the areas most highly affected are marginalized communities, communities that are, in fact, the least well-equipped to resist the pollution and its source. And these patterns hold through all economic levels, meaning race is the biggest determinant of environmental health. Take, for instance, the infamous Warren County PCB landfill in North Carolina. In 1982, a state board zoned a toxic waste dump in Warren County, the county with the highest proportion of Black residents in the state. These residents recognized that zoning this landfill in their county was no accident, and that it purposefully exposed them to disproportionate levels of pollution.

If the legislators thought that they were tucking the dump away in a “community of least resistance,” they were woefully mistaken. Warren County residents banded together alongside the National Association for the Advancement of Colored People (NAACP), fighting back against the proposal in massive protests, literally laying across the road leading to the dump to prevent trucks from reaching the landfill. Though the protests were ultimately unsuccessful and landfill construction proceeded, the story of Warren County ignited a movement all over the country to recognize and respond to that fact that marginalized communities bear the bulk of the nation’s environmental burden. In doing so, Warren County effectively united the civil rights movement with the environmental movement to spark a new movement called environmental justice, which continues today.

Now, nearly 40 years later, Sound Around Town is attempting to explore whether a new facet of environmental contamination is also disproportionately burdening the same state’s minority residents: noise. While the project is currently just focused on mapping the soundscape of Raleigh, it will eventually gather data from all over the country. With this data, supplemented by the NPS’s existing sound maps, the team will be able to assess whether harmful sounds are concentrated in communities of color.

But the project isn’t just interested in measuring sound levels. Sound Around Town’s second critical goal is to document how people feel about the soundscape they inhabit.

In addition to hosting recording devices in their backyards, Sound Around Town volunteers also take part in “listening sessions.” During a listening session, participants sit for ten minutes outside their home and log all the sounds they hear and how they feel about those sounds. While the recording devices are meant to record the physical qualities of noise, these sessions are meant to explore what the sounds mean to the people that hear them (though they are also useful in verifying and supplementing the sound characteristics recorded by the sensors).

Specifically, the research team is investigating the idea that while certain sounds are objectively bad for our health, like traffic noise, some people– perhaps people who grew up in urban environments where traffic was part of the fabric of the landscape– do not find such sounds objectionable and may in fact have a sentimental attachment to the noise. Carson’s team calls this the “Noise Paradox,” the idea that different people can perceive the same noise positively or negatively despite the fact that it is objectively harmful to their health.

The Principal Investigator (PI) on the project, Dr. Caren Cooper, said the noise paradox raises a difficult conundrum: “How do you manage noise pollution when people don’t perceive it as annoying?” Harmful sounds aren’t just loud sounds like jet engines that anyone would find annoying; they can also be any number of quieter, subtler sounds that emanate from the built landscape that people are used to and may even enjoy. The perceived benignity of harmful noise makes understanding its extent and impact all the more important.

Arming the public with knowledge

Cooper said one ultimate goal of the project is to give sound monitoring devices to public libraries all over the country so that community members can measure their noise exposure themselves. Empowering communities with these tools might increase awareness of the issue of noise pollution and lead to further community organizing around the topic. In this way, citizen science can equip community organizers to take action and tackle environmental justice problems. Sound Around Town is just one example of many projects connecting citizen science tools to environmental justice issues.

Our planet is shaking with sound. There are big sounds like bombs and thunderstorms.  And there are small sounds, like the emergence of a newborn chick from its egg. We are, in fact, composed of sound, according to Einstein: E=mc^2. Our mass is interchangeable with our energy, and our energy is a wave of vibration. Down to the quantum essence of our bodies, our machines, the creatures around us and the weather and geology that shape our planet are unique melodies of strings creating a unique harmony. Comprehending what happens at the human intersection of all this noise — how our bodies perceive and react to the soundscape around us — is critical to understanding our experience and our health. With that knowledge, we can empower ourselves to build a world that is more just, more equitable, and more empathetic.

Sound Around Town is not currently recruiting participants, but there is an active waitlist for those in and around the Raleigh, North Carolina area interested in recording their soundscape. If you are interested in joining the waitlist to host a sound recording device on your property, please join the project on SciStarter. The project IS currently recruiting participants from all over the country to participate in listening sessions. If you want more information on participating in a listening session, get in touch with Brittany Carson at blcarson@ncsu.edu.

— Bradley Allf is a graduate student in the Cooper Citizen Science Lab at NC State University, a poetry editor at In Layman’s Terms, and a freelance science writer.