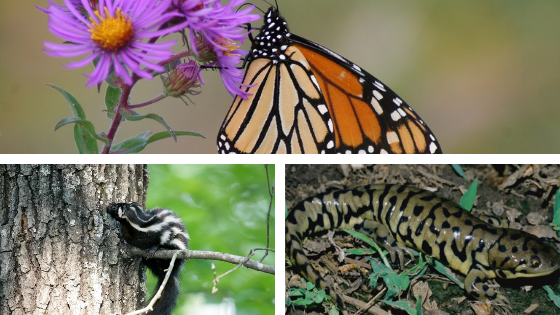 In Nebraska, scientists working for the Nebraska Game and Parks Commission are increasingly relying on casual researchers and citizen scientists to better understand three creatures in particular: spotted skunks, salamanders, and regal fritillary butterflies. Why? The populations of these species have either declined or are in jeopardy, and scientists want to get a current population count. Let’s take a closer look at these three Nebraskan citizen science projects and what researchers hope to learn from data collected by citizen scientists.

Nebraska is a big state. In fact, the Cornhusker State is about 77,358 square miles. That’s a lot of ground to cover for researchers who are studying butterflies, skunks, or salamanders — there aren’t enough scientists to travel to every single possible sighting location every day. As a result, researchers have turned to science enthusiasts in the state to help them study these creatures.

“Citizen science offers participants a great reason to get out and observe wildlife in Nebraska and beyond,” said Alie Mayes, a wildlife biologist for the Nebraska Game and Parks Commission. “As researchers, it can be difficult to have the capacity to collect the amount of data and cover the geographical range that we are able to with citizen science — [citizen science makes] the data that much more robust and valuable.”

Beyond contributing to research, participating in these projects can add value to the lives of participants.

“I love that citizen science can be a way to reach new audiences. Participants often are coming in with unique experiences and knowledge, so they are able to provide different insights and ideas that can help improve our projects. These projects can also be a catalyst for people to discover a new passion and/or understanding of science and the outdoors,” said Mayes.

So how can you participate in each of these Nebraskan citizen science projects?

Salamander Search is one of the newest projects set up by the Nebraska Game and Parks Commission. Specifically, the team records sightings of tiger and smallmouth salamanders, which live around the eastern border of the state. This project is a salamander census of sorts, helping researchers determine the population’s status in Nebraska.

“Salamanders are one of the many animals that go through metamorphosis, meaning they go through two or more distinct life stages. The salamander starts as an egg, hatching into aquatic larva. This larval stage looks similar to a frog’s, with the salamander looking very tadpole-like with a large head with a tail. Legs, gills, and other features develop as the larva grows, eventually growing into an adult salamander form.”

Occasionally, the Game and Parks Commission will offer free classes about how to best engage in this project.

Spotted skunks are small nocturnal mammals native to most of Nebraska. Instead of having sweeping white stripes down their body and tail, the spotted skunk has a series of irregular lines that resemble spots.

Nebraska considers this species critically imperiled because the last verified sighting of this little mammal was two years ago, in 2017. The spotted skunk only comes out at night and is a skilled climber, making sightings of it rare. That’s why seeing a live specimen isn’t necessary for this study.

“One great way to look for spotted skunks without bothering them is to use game or trail cameras. Landowners can set up cameras, following guidelines from the Nebraska Game and Parks Commission, that may increase success,” said Mayes. “Another way citizen scientists can find observations of this species is to keep a keen eye out when driving. Because these animals are so elusive, roadkill observations of the species can provide valuable data we would not get otherwise.”

The Game and Parks Commission orchestrates this ongoing search through iNaturalist.

In 2015, the Game and Parks Commission reached out to citizen scientists for the first time to ask for help spotting monarch and regal fritillary butterflies in the state. The butterfly monitoring project is ongoing, but in March 2019, the research team changed the project’s goals, splitting it into level one and level two surveys.

Level one surveys request single observations and focus solely on the regal fritillary, with one exception: if a citizen scientist spots a congregation of monarch butterflies numbering six or more, or spots one of the tagged butterflies (these are butterflies with a small white circle on their wings), they are welcome to submit this observation as part of the level one survey. These surveys take place during the second week of June through the middle of July, when both species of butterfly are present in the state. Observers record their observations, count the number of butterflies present, and take pictures if they can do so without harassing the butterflies.

Level two surveys are more complex. These are transect surveys, requiring the observer to walk in a straight line across an area of no less than five acres, while making observations along that path. Ideally, three transects should be made of a given area, with a cumulative survey length as close to 1,000 feet as possible. The goal is to record butterflies within 20 feet of either side of the transect. These level two surveys focus on both monarchs and regal fritillaries, and generally take 45 to 90 minutes.

Both of these beautiful butterflies can be found throughout the entire state, but their numbers have declined in recent years due to their dietary requirements.

“Like the more well-known monarch butterfly, the regal fritillary relies on a particular type of host plant to reproduce. Both monarch and regal adults [consume] nectar from various plants; however, their young are picky eaters!” said Mayes. “Monarch larvae feed only on milkweed plants, whereas regal larvae feed only on violets in prairie landscapes. This specialization makes habitat loss even more devastating to these species, because they cannot survive without these plants. Nebraska is a known stronghold for regal fritillaries, with higher populations here than in much of the species range. This is part of the reason monitoring this species in Nebraska is so important.”

According to Mayes, the best time to spot these butterflies is in the middle of the day when it is warm and calm outside.

Hope for the Future

The primary goal of these studies is to determine the size of the population of each of these species within the state of Nebraska. Anyone who loves spending time outside and has a keen eye can participate in these citizens science projects. Next time you’re in the state, help researchers and biologists determine how many members of each species still call Nebraska home.

— Megan Ray Nichols is a freelance science writer and the editor of Schooled By Science. She regularly writes for The Naked Scientists, Astronomy Magazine, and IoT Evolution. When she isn’t writing, Megan enjoys exploring new hiking trails, finding a new book to read or catching up on episodes of Dr. Who. Keep in touch with Megan by following her on Twitter (@nicholsrmegan) and subscribing to her blog (https://schooledbyscience.com/).