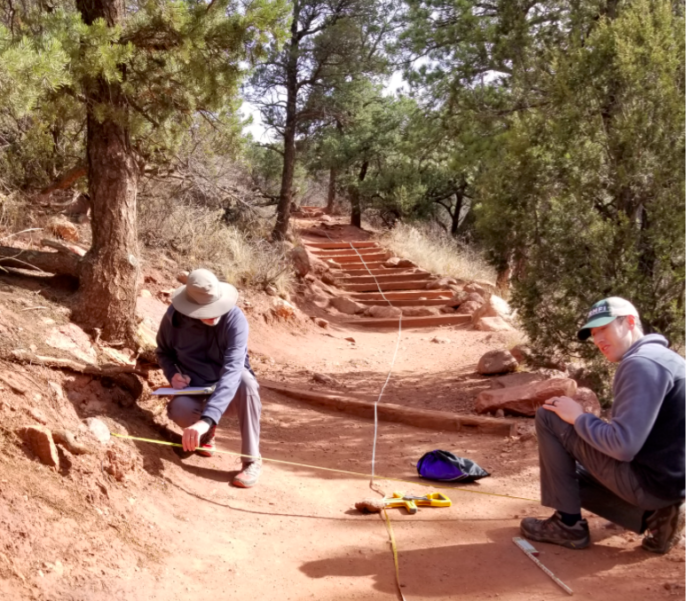 In the first quarter of 2018, I worked with the Rocky Mountain Field Institute (RMFI) staff to identify trails of monitoring interest. We reflected on the feedback received in 2017. The Citizen Science Program concept was received well at the end of 2017,  and we agreed to expand the Program by including more trails. All trails are in the Garden of the Gods in 2018. The potential for additional sites is there, but we agreed it was best to focus our attention on the Garden.

A question remains: how do we know that people are staying off of the closed social trails? The ecological response is that we know they are staying off of the trails because the plant community is rebounding, as evidenced by the analysis of 2017 data. We still need to understand how humans interact with these closed social trails. As a result, we agreed to include one new human monitoring protocol. I will work on these methods in the coming month. Loosely described, they involve a timed observation from a nearby blind from which a citizen scientist will count trail users, their mode of travel, and their behavior when they encounter the closed trails. Of interest is the potential variation in human behavior depending on the type of trail closure sign used, if any at all.

[tweetthis]Collecting data on people’s behaviors on nature trails helps ecological restoration and preservation projects. Read more to know how citizen scientists can get involved in them![/tweetthis]

The trails of interest for 2018 include both 2015 trail closures in the southern reservoir valley. We measured the more eastern trail in 2017, and now we will also measure the other trail to the west of it that runs straight through the middle of the valley. We also measure the Niobrara trail from 2017, the Strausenbeck trail, the Siamese Twins trail, the Ute Connector trail, and the Palmer trail from the main parking lot to Lot 5. Excluding the Niobrara trail, these are all trails with planned work in 2018.

In March, we collected baseline data on the four new restoration monitoring trails, the Strausenbeck trail, the Siamese Twins trail, the Ute Connector trail, and the Palmer trail. We set the longitudinal transect and collected cross-section width, thalweg and center depth measurements, and aspect data for each trail. We collected photo point data at every measurement site. I am working on photo point gallery for each trail to aid in future monitoring to verify our exact measurement locations since our GPS attempts last year failed due to the accuracy of the available equipment. I completed two of four photo galleries. They are available on the blog site I maintain about the Program: https://ecocity.partners/ecological-restoration/rmfi-citizen-science/

We retained all three of our citizen scientists from last year, Larry Bogue, Andrew Rippe, and William Brown. We have one trained new citizen scientist, Tyler Clinton, with four others in the training process. Our new volunteer, Tyler, is an American Military University undergraduate student. We have all gone out several times together this March. Each returning citizen scientist will be the mentor for their chosen trail. Larry is taking Strausenbeck, Andrew will have Siamese Twins and Ute Connector since they are the shortest sections, and William will lead the Palmer trail efforts. New citizen scientists will work with one of these gentlemen until their skills are strong. As always, I attend every field measurement event possible, but I have given Larry, William, and Andrew permission to measure without me. When I attend, my role is quality control. I often record the measurements, but my goal is to make sure the volunteers can collect reliable data without my physical assistance.

I created a recruiting poster, which I disseminated to my professional network. I joined the Friends of the Garden of the Gods in 2017, and I will be a guide for the nature hikes in the Garden on Fridays at 10 am. I want to deepen my relationship with other volunteer opportunities at the Garden to promote awareness of the Citizen Science Program.

—Maggie is CitSci.org project manager and a PhD student investigating training for citizen scientists who collect ecological data in the field. Maggie hopes to characterize current training efforts and looks for themes in instructional design and conceptual content.