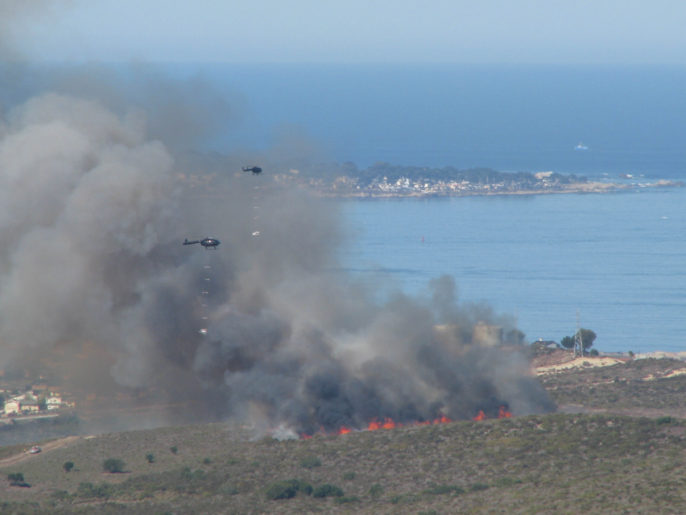 California suffered its largest and most destructive wildfires in 2017. Victims included hundreds of wild animals. When the blazing fires were finally extinguished, the surviving animals—including birds—were forced to find new homes. Now, for the first time, researchers investigating the effect of fire management practices on birds in California’s chaparral have found that one practice known as mastication, which consists of mechanically crushing vegetation to remove fuel, threatens bird communities.

“The best available science tells us that managing chaparral imperils wildlife and increases fire risk,” says Erica Newman, lead author of the study and a scientist at the University of Arizona. “We now know that mastication in particular is extremely harmful to bird populations.”

California’s iconic chaparral ecosystem is spread over much of California—occupying 6 percent of the state—and composed of shrubland in a region along the coast of North America known as the California Floristic Province (CFP)—a biodiversity hotspot containing 60 percent of endemic plant species. The climate resembles that of the Mediterranean with cool, wet winters and hot, dry summers. A quarter of the native vascular plant species in the CFP are found in chaparral.

When it is hot and dry, this ecosystem is historically highly prone to infrequent but high-intensity fires. Although many plants have adapted to fires, such as by protecting their seeds, says Newman, “the issue now is that wildfires are far more frequent and far more widespread than they should be because of human-caused ignitions.” She adds that “climate change is making the situation worse, because a wildfire can start at almost any time of the year now, not just the hot and dry seasons.”

With over 5 million housing units in California’s chaparral biome, agencies such as CALFIRE (California Department of Forestry and Fire Protection) protect human lives and property by carrying out fire management practices. These often consist of two methods: prescribed burning outside of the fire season and mastication. The latter is often the preferred choice around buildings and homes because it is smokeless and efficient, and it reduces the chances of an uncontrolled wildfire breaking out.

Previous studies have shown that after these fire management treatments, invasive grasses take over, gaining a foothold in areas that used to be dominated by shrubs. “These grasses become a fine fuel that dries out quickly, catches on fire easily, and vectors fires into chaparral that otherwise might not burn without the presence of grasses,” explains Newman. As a result, she says, frequent fire management can actually increase the risk of fires. And since grasses lack a deep root system, the area, which is prone to mudslides, can be hit hard during the rainy season following fires.

How these fire management methods affect bird communities is largely unknown. Newman’s team compared the effects of prescribed burning and mastication in fall, winter, and spring on bird community composition and abundance.

“This study was part of a large group of studies that came out of a large-scale environmental manipulation experiment in California chaparral,” says Newman. “Other studies from this experiment measured plant biodiversity response, which invasive species followed management, and how fire risk was affected over time.”

The study was carried out in Mendocino County on the north coast of California where over the course of two years, researchers removed fuel from 24 plots that were over 2 hectares (5 acres) in area. They did this by reducing the vegetation by 95 percent using both prescribed fires and mastication.

After removing fuel with the two treatments, two observers regularly surveyed birds in the plots using point counts (counting the numbers of birds observed and heard within a certain period of time) for two to five years.

Over 2,500 birds from 49 species were counted. As time progressed after the fire management activities, more and more birds were spotted, and after three years, bird numbers and species diversity in the burned plots resembled those in the unmanaged plots. But the masticated plots failed to recover, likely due to the changes in vegetation composition; the number of birds plunged by 60 percent, and the number of bird species dropped by 50 percent.

The season in which the fuels were reduced did not have much of an effect on bird species diversity. Still, fall fires resulted in greater bird numbers than the spring and winter fires did, whereas winter fires led to a higher number of species and a community most similar to the unmanaged plots.

While fire management treatments in all seasons eventually resulted in a similar bird community structure to the unmanaged plots, mastication almost wiped out foliage-gleaning birds and increased seed-eating birds (granivores) as opposed to insect-eating birds (insectivores).

These results suggest that prescribed fire—particularly in fall and winter—is less damaging to birds than mastication. Sometimes, prescribed fires are conducted in California’s chaparral under the assumption that it is good for biodiversity. “But a large number of scientific studies have demonstrated repeatedly that prescribed fire is not needed for the maintenance of chaparral biodiversity and can permanently damage it if used too frequently,” says Newman.

Demand for homes is expected to rise in the coming years, but Newman stresses that homes and other buildings should be built farther away from chaparral vegetation and that people can live more densely in areas that are not prone to regular burning. These approaches will benefit both humans and wildlife.

“We should not be managing chaparral with prescribed fire or mastication unless there is a clear and demonstrated need, such as a home in the immediate vicinity,” she cautions.

HOW WILDFIRES START THEIR OWN WEATHER

The U.S. Army Corps of Engineers Sacramento District conducted a controlled burn of central marine chaparral at Fort Ord, Calif., Oct. 15, to expose unexploded ordnance at the formerly utilized defense site. The burn, carefully coordinated with local agencies, lasted less than two hours and was timed so that prevailing winds would help blow the smoke away from population centers. The controlled burns are part of a comprehensive ordnance removal program at Fort Ord, which closed in 1994 under recommendation from the Base Realignment and Closure Commission. (U.S. Army photo/Released)