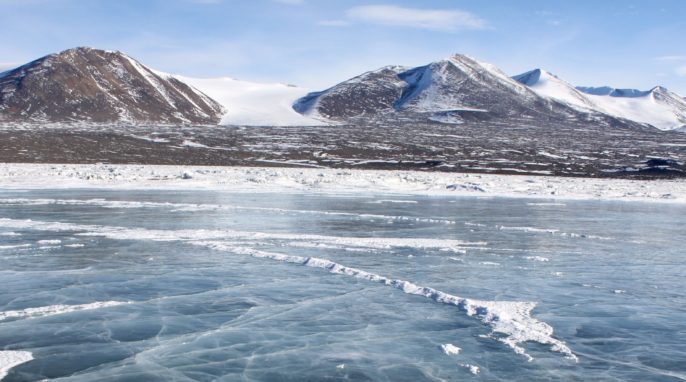 A rise in ocean temperatures by 1°C may not seem like a lot. But researchers were surprised to find nearly doubled growth of some species with just one-degree rise in ocean warming and varied growth responses of assemblages with two degrees of warming, in the most realistic marine warming study conducted in Antarctica to date. These drastic changes in community structure may have huge consequences for the entire ecosystem, as they affect the food chain.

“I was not expecting such a visible difference,” said Gail Ashton, a marine benthic ecologist at British Antarctic Survey and Smithsonian Environmental Research Center and the lead author of the study. “This research points to more extensive change [in ocean floor temperatures] at the poles than we would have predicted.”

In the next 50 years, shallow ocean temperatures are expected to rise by 1°C because of the increase in greenhouse gases, and by 2°C in the next 100 years, yet no one knows how organisms living in the ocean seabed—particularly in the poles, such as in Antarctica—will respond to this unprecedented change in their environment.

To find out, Ashton and her team placed heated plastic panels set in concrete on the seabed of the Bellingshausen Sea west of the Antarctic Peninsula, where sea temperatures have already risen by up to 0.3°C per decade since 1990. These panels raised the temperature of a 2-millimeter layer of water over their surface by one or two degrees Celsius. In this nine-month experiment spanning June 2014 to March of the following year, the researchers observed growth rates of the organisms as well as species composition and assemblage diversity.

“Massive” changes on the ocean floor

With a 1°C rise in sea temperature, all six species showed increased growth rates, but some grew at surprisingly high levels. A colonial bryozoan, Fenestrulina rugula—tiny suspension-feeding moss invertebrate that feeds on phytoplankton—smothered the panels, growing to over twice the surface area in just two months. Rapid growth of this pioneer species dominated the community in the seabed, driving out other species and lowering biodiversity. Another species, a tiny marine worm, Romanchella perrieri, grew 70 percent larger than it did in non-warming conditions.

According to long-established research, it is expected that growth rates of organisms will go up by 7 to 12 percent with 1°C of warming. But the nearly doubled growth levels seen in this study changes our perspective on the effects of warming in polar organisms in the next 50 to 100 years.

Interestingly, the growth rates of species varied according to the seasons, with all species showing increases in growth during the summer months (December to February) and varied growth in March, when food supplies for filter-feeders was low.

Although it is difficult to predict on a wider scale how organisms will respond to a 1°C rise in sea temperatures, Ashton expects “the composition of that community to change, with some winners and some losers.”

She sums up how this affects us: “If you value the functions that the ocean provides—whether that’s your food, recreational opportunities, biodiversity, resilience to change, marine products—then it all affects you.”