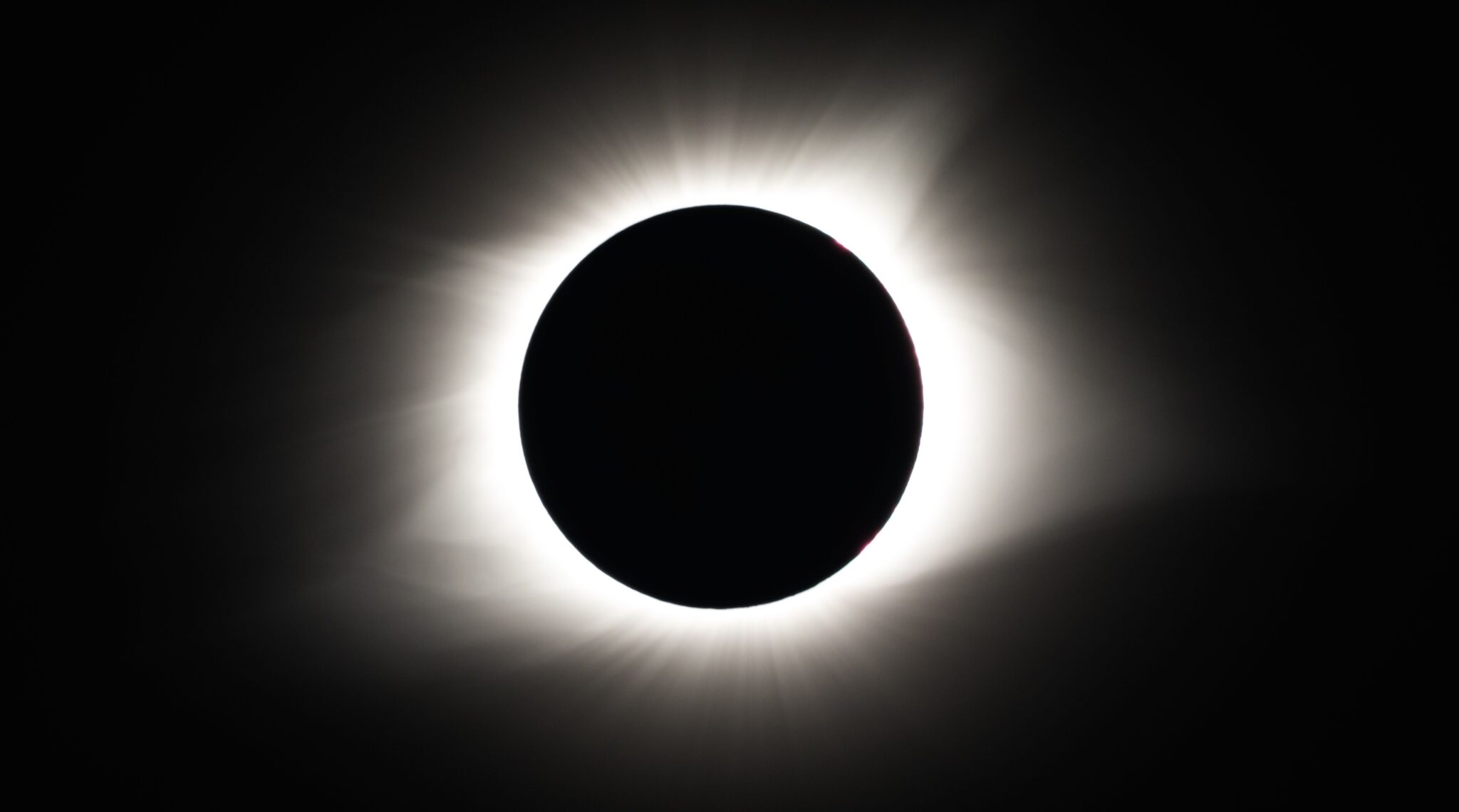 For a while, I was conflicted about the effort to see the solar eclipse either in totality—which would require significant travel time—or at the 75-percent coverage I could get in my backyard. A couple of weeks ago, however, I decided I wanted to be part of the full experience of totality and committed to making the journey. For me, the closest point on the path of totality was Carbondale, Illinois. I purchased my solar glasses and a solar filtration sheet for my camera and started planning to get to Carbondale. Because I waited too long to make arrangements, the closest hotel I could find for Sunday night was in Champaign, Illinois, about a three-and-a-half-hour drive from Carbondale. I loaded up my camera gear and headed for southern Illinois.

I arrived at the location midmorning with a couple of hours before the eclipse would begin. I set up and tested my equipment and then found a nice shady spot under a tree to relax for a bit.

As soon as the moon took the first little bite out of the sun, the couple of hundred people gathered in our area started murmuring with excitement, and I began to shoot away. My first reaction was simply how fast the sun traveled. By the time I took a shot and checked to make sure everything looked right, I had to reorient the camera to keep up with the sun. During this process, I took a picture about every 10 minutes. I later discovered that I captured the International Space Station as it raced past the sun.

[tweetthis]Missed the solar eclipse in totality? Here’s a firsthand account of the good, the bad, and the incredible![/tweetthis]

As the eclipse progressed, a breeze picked up, and clouds started to roll in. We all became very nervous that at the moment of totality, we might be under cloud cover. Obviously, there was nothing we could do except hang in there and see what transpired.

At about 30 minutes before totality, strange things started to happen. First, the light was noticeably dimmer. It felt like dusk, but the shadows were still at midday orientation. The wind stopped, freezing the large clouds in their tracks. The small clouds around us dissipated. At 10 minutes before totality, it was quite dark and the air was completely still. Crickets started chirping, birds were calling, and we could see fish coming to the surface of the pond near where we were standing. The noises grew louder and louder.

From a photography perspective, I had prepared by discussing with my friends the process to transition from partial to the total eclipse. When the sun is blocked, you need to remove the camera filter because it’s so dark, and then you must make sure to put the filter back on as the sun peeks out from behind the moon. Well, best-laid plans. . . . In the excitement of reaching totality, I completely forgot to take off the filter. For about one minute of the just over two minutes of totality, I was working the camera and couldn’t figure out why the pictures were so dark. I was shooting with a friend and could hear him struggling too. Having given up, I decided just to watch the eclipse for myself; when I looked up, I was amazed. I could clearly see the moon like any other night, but it had a dazzling glow all around it. I was simply staring at it and telling my friend I was only going to watch because I couldn’t get the camera working correctly. Then it hit us: we had left the filters on.

We quickly scrambled to remove the filters and started shooting again. Phew—we were just in time to capture a couple of images of totality and the diamond ring as the sun started to peek around the moon. Of course, at that point, I didn’t know what pictures I had.

It was going to be a challenge getting out of Carbondale with the masses of people gathered there, so I scrambled to hit the road as soon as totality completed. I was one of the lucky ones who only experienced a two-hour delay, making it a nine-hour drive home. Many others who stayed just a little longer were stuck in much more traffic.

It was a long day getting up well before sunrise, standing in 90-degree heat for several hours, driving for 14 hours total, and almost nearly missing totality with my filter mistake. But it was all worth it to see one of nature’s most amazing shows and to be part of the experience connecting millions of Americans across the country. I am already looking forward to the next eclipse in 2024 when I will be ready to remove my filter on time.

—Jeff Goldberg is an avid nature, wildlife, and travel photographer from the Chicago area. He has traveled the world and the United States to experience and capture what nature has to offer. Recently, Jeff had the opportunity to photograph tigers in their native India habitat, wildlife in Costa Rica, the Grand Canyon, and other destinations. You can follow Jeff on Instagram at @jeffagoldberg.

Fratured image: the total solar eclipse. All photos are by Jeff Goldberg.