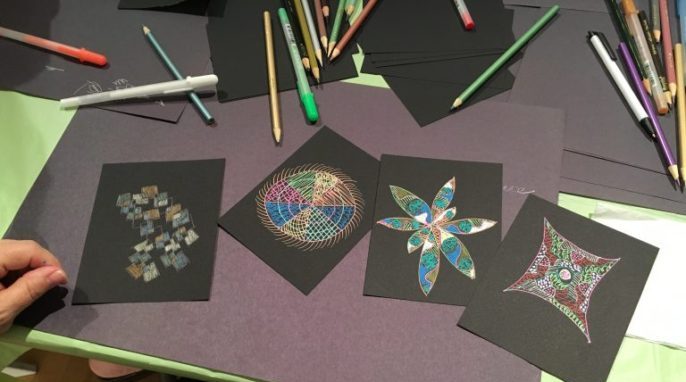 STEAM: Science, Technology, Engineering, ART, and Mathematics. The goal of STEAM is to help engage with and explain science through art. What does it mean to you?

What comes to mind when you envision science? A scientist looking through a microscope? A pipette slurping up liquid from a tube? A whole bunch of equations on a blackboard? These snapshots often depict science in the news or in movies, but what really brings science alive is the image at the other end of the microscope, the structure of proteins in that test tube, or the physical problem being modeled with those equations. This is where the art comes in. People have been drawing or stylizing scientific images since the beginning of modern science. These images not only excite the imagination and inform the public, but also guide scientists toward new discoveries—they can form hypotheses about how things work based on what things look like.

The combined fields of science, technology, engineering, and math are often referred to by the catchy abbreviation STEM. And when art is added, you get STEAM. An artist who has dedicated much of her career to making science “STEAM-y,” Cyndi Coon is an artist, writer, and thinker for hire. She is involved in creating and developing “future think” ideas with STEAM leaders nationwide and is the Chief Experience Officer of Laboratory5.

Cyndi uses Ernst Haeckel as a great example of how art can engage the public with science. She explains, “Ernst Haeckel is particularly interesting to me because he was a scientist (biologist, naturalist, philosopher, physician, marine biologist) who discovered, described, and named thousands of new species; mapped a genealogical tree relating all life forms; and coined many terms in biology, including anthropogeny, ecology, phylum, phylogeny, stem cell, and Protista.”

Bringing On the Science

Haeckel, as a cell biologist, was in part using what cells look like to better understand their function. This can be done with many different types of cells. For example, lung cells have little wavy fingers called cilia that are used to remove debris from the lung. You can imagine the cilia literally “sweeping away” the dirt, since they look like little brooms. Or as another example, plant cells have a hard exterior that helps make plants’ leaves rigid. This hard exterior is called the cell wall and looks just like a thin, little wall between cells.

Although most scientists stick to scientific extrapolation from exactly what is seen under the microscope, Haeckel, as an artist, created illustrations of animals and sea creatures that are as stunning as they are sometimes misleading. As Cyndi explains, “What [Haeckel] really became famous for is controversy. He became so focused on his theories and ideas and the artistic aesthetics of his work that often he just made stuff up. He would host public lectures fully detailing a new discovery, with images as proof, that he had entirely invented. This is not what a scientist normally does, but it is definitely how the imagination creates art. If we remove the unethical, not-quite-science piece of it, he was an 1800s performance artist and imaginative visual artist. He was wrong a lot and was told so by his colleagues, but he kept on with his vision. At the end of his days, though, he contributed a great deal to science, to his community, and to the artistic community. We learned a great deal from his speculations, and those things that turned out to be true or close to the truth changed or created many areas of science we know today.”

STEAM Comes to Life in a “Cell-fie”

Inspired by science’s form influencing function and Haeckel’s colorful and vibrant images, Cyndi and I collaborated on a “STEAM-y” event involving a project you can try at home with your kids or within your classroom. At the original event, hosted at Tempe Center for the Arts, participants used black paper, gel pens, and colored pencils to create “Cell-fies.”

Cell-fies should be inspired by nature, which, as Cyndi reminds us, often contains patterns and some level of symmetry. This, along with grouping shapes together, can mimic the natural shapes and groupings of cells. Alternatively, cells can be drawn in such a way as to imply the function of the cell. Some examples from the event are shown below.

The goal of STEAM is to help engage with and explain science through art. Bringing together science and creativity in education and with the public not only expands interest in science, but also helps scientists visualize and imagine their science in a whole new light. Or, as Cyndi attests, “When we lead, fearlessly, with our imaginations we open up entire new worlds.”

Dr. Cathy Seiler is the manager of the Biobank Core Facility at Barrow Neurological Institute and St. Joseph’s Hospital. She received her bachelor’s degree in biochemistry and molecular biology at Boston University and her PhD at the Watson School of Biological Sciences at Cold Spring Harbor Laboratory, studying cancer. In her spare time, Cathy is the editor for ISBER News and writes about science and the life of a scientist on her blog Things I Tell My Mom.

Photos from the event courtesy of the author.