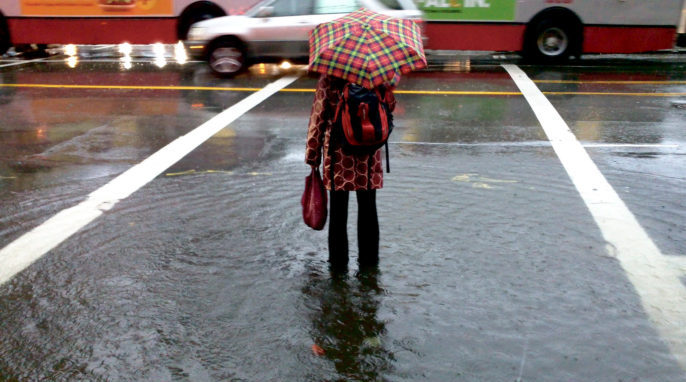 If you live in California, you might recall the powerful winter rainstorm of 2014, dubbed the “storm of the decade.” While it offered some respite from the prolonged drought in the region, it dumped several inches of rain—in some Bay Area counties average annual rainfall was doubled—which caused widespread flooding and power outages. Until now such intense rainstorms have been rare. But in the future, Californians may need to clutch their umbrellas and slip on their rain boots more often because such monster rainstorms might become the norm. Using a new technique, scientists predict that with rising temperatures over the century, California will experience more frequent heavy rainfall events.

The phenomenon responsible for the rainstorm known as the “Pineapple Express” occurs when a stream of moisture-rich air from the Hawaiian Islands travels up north. The resulting deluge from rainstorms isn’t only disruptive for people; the humidity resulting from rainy weather can threaten our food supply by making food crops more vulnerable to infection by bacteria.

Normally, global climate models use precipitation data to simulate and predict rainfall. Since the models cover an area consisting of thousands of kilometers, and because they do not take into account regional changes in terrain and moisture convection, they are not as accurate as could be hoped. As a result, researchers from Massachusetts Institute of Technology, led by Dr. Xiang Gao, developed an “analogue method” to predict heavy rainfall events in response to climate change. Instead of precipitation data, they analyzed large-scale atmospheric circulation conditions such as wind currents and moisture content from 1979 to 2005 to identify distinct patterns associated with observed extreme rainfall—the top 5 percent of precipitation events in a season.

Atmospheric circulation “patterns are well-resolved by the climate models, since they are based on the solutions of the common well-understood and numerically resolved equations. In other words, the atmospheric patterns from climate models are more reliable compared to the simulated precipitation amount,” says Gao.

Compared with standard coarse climate models, the analogue method was found to be more accurate at reproducing the number of heavy precipitation events observed over the past 27 years. “None of the models are even close to the observations,” Gao says. “And regardless of the combination of atmospheric variables we used, the new schemes were much closer to observations.”

Gao and her team applied the patterns they detected in the analogue model to predict regional rainfall in California and the Midwest in response to two warming scenarios. One is known as the “business as usual” case, in which greenhouse gases keep rising if no action is taken to curb emissions, causing global temperatures to shoot up by 4 degrees Celsius by 2100. The other scenario is that environmental policies are able to mitigate emissions and limit the rise to 2 degrees Celsius.

Normally, California receives more heavy rain in the winter, whereas the Midwest experiences heavy rain in the summer months. In the “business as usual” high temperature rise scenario, California would be hit with three more extreme precipitation events per year—particularly toward the end of the century. But in the lower temperature rise scenario, there would be half as many heavy precipitation events compared to the high emissions scenario. “What our method tells you is, for California, we’re very confident that [heavy precipitation] will increase by the end of the century,” says Adam Schlosser, senior research scientist in MIT’s Joint Program on the Science and Policy of Global Change.

More accurate predictions allow us to prepare for disasters, especially with the flooding and power outages that are triggered by heavy rainfall. And Californians may need to spend more on rain-proofing their homes to guard against damaging their belongings.

Now, the team is focusing on finding patterns in heat waves using atmospheric data and predicting changes under the two climate change scenarios. Such information will be useful in anticipating demand for power and allow officials to plan accordingly for the maintenance of power grids.