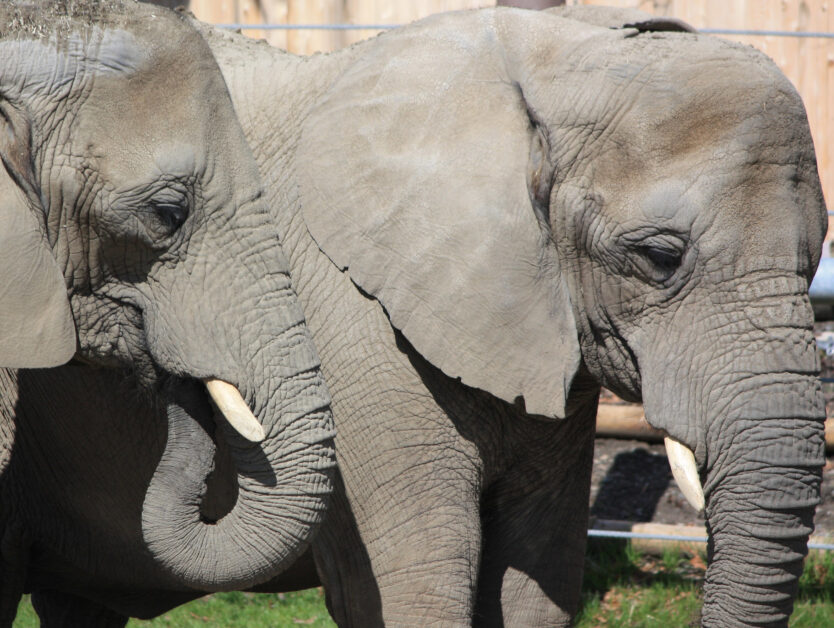 Slaughtered elephants are the result of a demand for ivory that has decimated both forest and savannah elephant populations across Africa.

Finished ivory ornaments and jewelry may look beautiful, but the ivory trade is a gory business. Killing elephants and forcibly cutting out their tusks is a sight almost no one would want to see. Yet strong demand for ivory has decimated both forest and savannah elephant populations across Africa by about two-thirds over the past years. Despite the international ban on ivory trading since 1990, scores of seizures of poached ivory continue at seaports and airports around the world. Few poachers are arrested or convicted—often claiming the ivory comes from old stockpiles before the ban. But now researchers have discovered that 90 percent of the ivory seized by officials came from elephants killed less than three years before it was seized.

The battle against poaching has been ongoing; since 2010, over 40 tons of ivory have been seized. “Sometimes, many of the tusks are so small that you can’t understand why the animal was even killed,” says Samuel Wasser, director of the Center for Conservation Biology at the University of Washington, who led the collection of ivory samples for the study. “Tusks can weigh less than one pound, with almost no carvable ivory on them.”

African elephants—the largest land mammals on Earth—are not only social but also highly intelligent animals. They use their tusks for stripping off tree bark and digging for food and water. For centuries, humans have had a penchant for elephant tusks, also known as ivory, for various uses. Traditionally, ivory was used to make items to display one’s wealth—and according to a recent study, young people still buy ivory products to project their social status.

During the 1980s demand for ivory soared, causing a drastic drop in elephant numbers—from 1.5 million in 1979 to less than half that number in a decade. Then in 1990 came the international ban on the trade of ivory. But it wasn’t until June 2016, 26 years later, that the United States imposed a near-total ban on the selling and buying of African elephant ivory. Yet the slaughter of elephants continues unabated: approximately 96 African elephants are killed daily.

Over the past few years, the demand for illegal ivory has shifted to East Asia, notably China, with the rise of the middle class, who have developed a taste for ornamental ivory objects. While the largest ivory retail market is in China, the United States remains in second place. Ivory, sometimes referred to as the “white gold of jihad,” has been used to fund terrorist groups. Rising ivory prices have triggered militants in countries including Uganda, Somalia, and Sudan to kill elephants and buy guns using the money from the sale of the tusks. Also, rampant corruption among government officials allows traffickers of illegal ivory to pay their way out of trouble.

The international ban excluded the trading of ivory and ivory products from before 1976. Many traders caught with stockpiles of ivory claim that their ivory had been acquired before the ban. Using recent advances in forensic techniques, such as radiocarbon dating of ivory samples, scientists have been able to find out the year of death of the elephants to ascertain whether the ivory is indeed legal as claimed. Genetic analysis can further reveal where the elephants came from, to find out where poaching is prevalent. Combining this data, scientists can also determine how long it takes for ivory to reach the market, referred to as the “lag time,” for each region in Africa.

Estimating the date of death of slaughtered elephants

Radiocarbon dating estimates the approximate date of death of an animal by measuring the amount of carbon-14, an isotope of carbon, in the tissue sample. Nuclear weapons testing in the United States during the 1950s and early 1960s deposited large amounts of carbon-14 in the form of carbon dioxide into our atmosphere. Plants absorb this radioactive carbon dioxide, which they use for photosynthesis. Since then the levels have declined and continue to drop, but plants still take up a measurable amount of carbon-14, and as elephants eat plants it enters their bodies and is incorporated into newly formed tusks. The base of the tusk grows new material, and the amount of carbon-14, also known as the “bomb carbon-14” signature, in this portion of the most recently formed tusk can indicate when the elephant died.

The researchers collected 231 ivory samples from stockpiles of 14 large ivory seizures (exceeding 0.5 tons) made by officials between 2002 and 2014 around the world. They cut small sections from the inside of the base of the tusks where the ivory known as dentine was forming before the elephant died, then measured the carbon-14 signature in the dentine to find out when the elephant died.

The researchers’ findings confirmed what many had suspected—and feared. Most of the samples were from recently killed animals. In fact, 90 percent of the ivory they tested was from elephants that had died less than three years before the time the ivory was confiscated. Only one of the samples was more than six years old. “This means that the governments in Africa were correct that their long-held ivory stockpiles were not part of the illegal trade and they are secure. It also means that ivory traders do not have significant stockpiles in hand that they are releasing for trade. It also means that the killing rate of elephants is quite high,” says Thure Cerling, first author of the study and distinguished professor of geology and geophysics at the University of Utah.

The researchers were able to decipher which regions of Africa had the fastest lag time from recently slaughtered elephants to ivory export. East Africa had the highest proportion of specimens—one-third—with the shortest lag time of less than a year. In contrast, a higher fraction of ivory from the TRIDOM region (Cameroon, Gabon, Congo) took the longest to reach the market, with a lag time of more than two years. According to Cerling, this information can help to pinpoint which regions of Africa are hot spots of poaching, so that conservation and law enforcement officers can target those areas.

“The extinction of elephants and other wildlife due to demand for illegal wildlife products is a major problem,” says Cerling. “The illegal trade must be attacked on several fronts: poaching on the ground; in the trade stream; at the ports (both air and sea); at the customs level (both import and export—are there ‘inside’ people permitting import/export); in the legal system (punishment should be severe enough to deter participants); at the ‘consumer’ end to reduce demand.”

Cerling and his team will continue to work with law enforcement agencies to understand different aspects of illegal wildlife trade and reduce the number of slaughtered elephants.