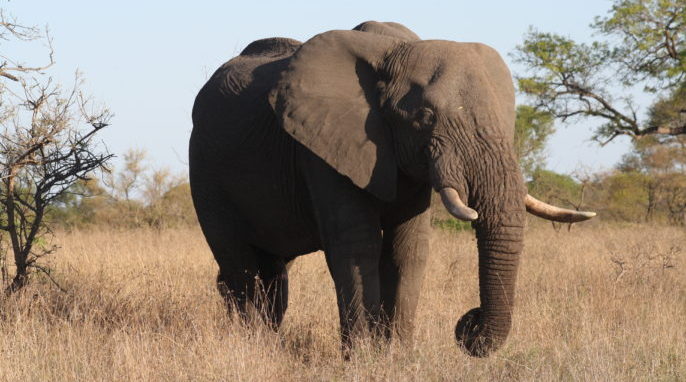 When elephants feed on trees, they are capable of knocking trees over. The impact of elephants can pose a problem for wildlife populations.

African elephants (Loxodonta africana) are massive, weighing up to 7 tons, and eat up to 300 pounds of food in one day. Much of their diet is made up of various parts of trees, including the bark, leaves, branches, roots, and thorns. When elephants feed on trees, they are capable of knocking the trees over, which can create habitats that are more suitable for other animals, such as antelopes, lizards, or ants, than for the elephants themselves. Because elephants create altered environments through their feeding habits they are called “ecosystem engineers.”

African elephants spend much of their day foraging and naturally have very large ranges. However, in South Africa their movements are often restricted by fences, so they may spend unnaturally long periods of time in certain areas. In these areas, elephants have the potential to negatively affect the trees and other species that rely on them, much more so than when they can range freely. Many management strategies, such as environmental manipulation, translocation, contraceptives, and culling (all used at various times in South Africa’s history) focus on reducing elephant numbers to decrease impact to vegetation. Because these methods can be controversial and costly, alternative methods could be used to protect the trees themselves from elephants. The idea is not to protect all trees but to protect vulnerable individuals or areas, in order to maintain certain aesthetically important landscape features and ensure seed sources to repopulate the surrounding landscape.

Elephants can impact trees in several ways while feeding, including stripping the bark, breaking branches, and knocking the trees over (felling). In a study conducted in South Africa and published in 2016, we assessed the effectiveness of reducing elephant impact to trees by wrapping wire netting around the bark. We focused on three relatively abundant, large species in the area: false marula (Lannea schweinfurthii), marula (Sclerocarya birrea), and knobthorn (Acacia nigrescens). Since elephants can impact trees in several ways, we assessed the wire netting’s effect on bark stripping, branch breaking, and felling, but expected it to have the biggest effect on bark stripping.

We found that wire netting reduced the number of trees that were bark stripped and the severity of the bark stripping. This is important because severe bark stripping can kill the tree. Species of tree was also an important factor influencing bark stripping, with knobthorn being bark stripped more frequently than false marula, which in turn was bark stripped significantly more than marula. Although wire netting did not significantly reduce the number of trees affected specifically by branch breaking or felling, it did reduce the overall severity of elephant impact. Tree species and size were also important factors for branch breaking, while tree size affected felling. Since wire netting is relatively cheap and effective at reducing some types of impact by elephants, it could be used in areas where elephants are confined and impact on trees is particularly high.

These findings are published in the journal KOEDOE. This study was initiated by Elephants Alive over 10 years ago and recently funded by Western Kentucky University’s Graduate School, Office of Sponsored Programs, and Department of Biology; the US Fish and Wildlife Service; and the Tienhoven Foundation for International Protection.

Kelly Derham is a PhD student in the Interdepartmental Program in Ecology at Pennsylvania State University, with a master’s degree in science from Western Kentucky University. She is currently researching oak forests in the northeastern United States. Kelly is passionate about increasing public access to scientific information and increasing diversity in science. She has served on the Penn State Science Café committee and the Women In Science and Engineering Advisory Board at Western Kentucky University.