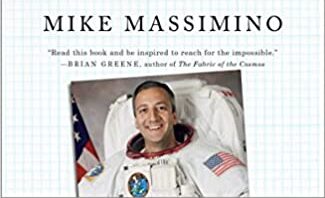 Title: Spaceman: An Astronaut’s Unlikely Journey to Unlock the Secrets of the Universe

Best for: teen and up

Mike Massimino, former space shuttle astronaut and current professor at Columbia University, shares his path with us in this autobiography. Spaceman: An Astronaut’s Unlikely Journey to Unlock the Secrets of the Universe isn’t about astronaut heroics and tales of superhuman feats. It’s a tale of Mike’s down-to-earth, gritty effort to do something he was passionate about—to reach for the stars.

Every generation faces similar questions and choices. Do you take the safe choice, or do you dream big and take a riskier path to do what you feel passionate about?

Mike and I are basically from the same generation. He is old enough to remember Neil Armstrong walking on the moon. While I saw the Apollo 11 landing, the first memories of lunar exploration that I can be 100 percent sure are my own are of Alan Shepard hitting golf balls on the moon during the Apollo 14 mission. Both of us—along with many others in our generation—were inspired by humans doing the impossible: flying to the moon and back. It gave us a lifelong love of space exploration and science. Mike did something truly extraordinary: he made it into space twice, doing spacewalks to repair the Hubble space telescope on STS-109 (Space Shuttle Columbia) and STS-125 (Space Shuttle Atlantis). For the shuttle nerds among us, the Hubble missions were among the highest and fastest shuttle missions flown.

Mike’s background was a modest one. His father was a safety inspector for the New York City Fire Department, and his mother was a seamstress. Mike wasn’t the best in school, but he was the best all-rounder. He went to undergraduate school at Columbia and later applied to MIT for graduate school. In fact, Mike mistakenly applied to the wrong graduate program, was accepted, then had to withdraw and reapply to the correct one. He struggled with his master’s degree and faced a tough choice about what to do next. Fortunately, he had a mentor who encouraged him to keep going after what he was passionate about. Mike decided to go for his PhD at MIT but performed horribly at his first qualifying exam. With the help of other PhD candidates and his own dogged determination to succeed, Mike passed the qualifying exam the second time.

That’s one of the main themes throughout Spaceman: An Astronaut’s Unlikely Journey to Unlock the Secrets of the Universe. Don’t give up; go back and try harder. Mike faced failure multiple times, both academically and professionally. He learned that success isn’t a one-man show. Teamwork and family are two of the other leitmotifs recurring throughout his life.

Spaceman is ultimately about human spaceflight, and the book won’t disappoint. It delivers an insider’s view of becoming an astronaut, training for a mission, and being out there in space, where the success or failure of a mission comes down to the actions of humans. Mike was in one of the highest-profile missions ever: repairing the Hubble space telescope on one of the last shuttle flights. It was a close thing and came down to an astronaut improvising a solution to gain access to a power supply never intended to be serviced.

“Imagine you’re standing on top of the Empire State Building in Manhattan holding a laser pointer. Now imagine I’m down in DC on top of the Washington Monument holding up a dime, and you’re able to hit that dime with your laser pointer. Now imagine that you and the Empire State Building are moving 17,500 miles per hour in one direction, and the Washington Monument and my dime are moving thousands of miles per hour away from you in a different direction, and you can still hold that spot on the dime even as we hurtle away from each other in opposite directions at incredible speeds.”

Every generation needs inspiration to keep the dream of human exploration and spaceflight alive. For one generation it was Chuck Yeager breaking the sound barrier, for another Yuri Gagarin or John Glenn orbiting the Earth, or, later, Neil Armstrong and the Apollo astronauts landing on the moon. Mike Massimino, along with the shuttle astronauts and the International Space Station astronauts, has kept the dream alive for the current generation. Mike’s autobiography will hopefully inspire the next generation to keep working on their dreams, whether those dreams are to build rockets, create life support systems, write computer programs, or possibly one day walk on the surface of Mars. Although Mike is too modest to admit it, he’s become a legend just like the astronauts he looked up to: Neil Armstrong, Buzz Aldrin, Mike Collins, Jim Lovell, John Young, and many more.

Mike’s book is not a book about a superman. He’s very relatable, open, and even humorous in sharing his path to the stars. The path was rocky and sometimes seemed to be going the wrong way, but his passion for what he was doing helped him to climb to heights few have ever reached. This book is recommended reading for anyone interested in human spaceflight. I consider it an outstanding choice for anyone trying to decide what to study or facing challenges in their studies, especially for anyone considering or already in a STEM field.

Mike, you succeeded in writing one of the best books about spaceflight that I’ve read in years.

Mike Massimino, author of Spaceman, served as an astronaut for NASA between 1996 and 2014, going on two missions to service the Hubble telescope and spending more than 30 hours on spacewalks. He has appeared as himself on The Big Bang Theory and is now a professor at the University of Columbia. He lives in New York. Mike was the first astronaut to tweet from space and can be followed @Astro_Mike.

Click here for a good interview with Mike talking about the Hubble missions described in Spaceman.