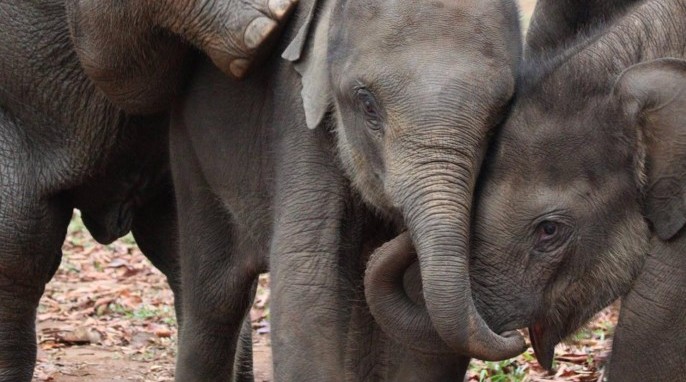 Elephants born to stressed parents grow up to have fewer offspring and age faster. Does the same pattern apply to humans?

In the world of mammals, parental stress can have a lifelong impact on offspring. Elephants born into stressful situations grow up to have fewer offspring and age faster, researchers at the University of Sheffield have found.

Scientists discovered that Asian elephants born to mothers with high stress levels grow up quickly, but then produce significantly fewer offspring in their lifetime.The research team also found that those animals born under stressful conditions had their lives cut short by premature old age.

“Poor early life conditions have been linked to many disease outcomes in humans, but is unknown whether stress in early life also speeds up aging rates in long-lived species,” explains Dr. Hannah Mumby. “We found that the decline in reproduction with age is much steeper in the elephants born at the poorer time of year. Even though they reproduce slightly more when they’re young, this still doesn’t compensate for the steep decline and they end up with fewer offspring.”

The scientists were able to analyze the long-term effects of stress on 10,000 elephants spanning three generations in Myanmar.

The researchers used measures of a hormone associated with stress (glucocorticoid metabolites) to determine which months created stressful conditions for the elephants. The study showed that June to August, which is monsoon season, are the most challenging months for the animals. The number of calves born at this time is low and their survival rate is not very good.

“Fertility and reproductive rate decline with age for all of us, but for some faster than others – and this variation was how we measured differences in aging,” says Dr. Virpi Lummaa.

The results of this research highlight the potential for stressed parents to be associated with offspring aging and wellbeing. They could also have important implications for Asian elephant populations both in western zoos, where they may experience stressful conditions associated with captivity, and in range countries where both captive and wild elephants may experience seasonal exposure to stress. Improving developmental conditions could therefore delay reproductive aging in species as long-lived as humans.