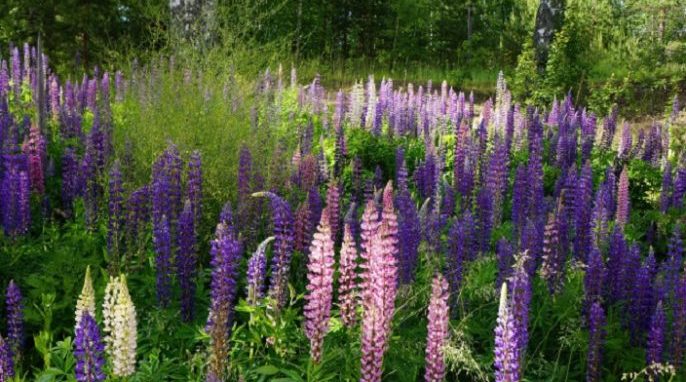 Roadsides, ditches, and railway lines in Norway are awash with color every June.  Lupine flowers bloom, and dense swathes of purple, pink, and white blossoms stacked into perfect pillars brighten the countryside. I love the vibrant colors, but I have to stop to remind myself that these are not the friendly wildflowers of my Canadian childhood.

Lupinus polyphyllus, the big-leaved lupine, is native to the western United States and Canada, from British Columbia and Alberta south to California and east to Montana, Idaho, and Nevada—but in Norway and the rest of Europe it is an introduced invader. In many European countries, lupines have escaped from household gardens where they were originally planted for their vivid blossoms. Once on the loose, they rapidly colonize disturbed habitats such as roadsides, where they are particularly well adapted to spread and thrive.

What makes this plant so well adapted to spread? Nutrient-poor soils in marginal habitats are less of a barrier to lupine than to most native plants because of lupine’s two specialized mechanisms for acquiring essential nutrients including nitrogen, phosphorous, and potassium. Symbiotic bacteria occur in specialized nodules on lupine roots where they convert atmospheric nitrogen into forms the plant can use. In addition, the roots themselves release massive amounts of carboxylic acid into the soil, facilitating the uptake of phosphorous. Their efficient nutrient scavenging actually allows lupines to enrich the soil they colonize. The plants are biennial, surviving only two years and shedding all their leaves in winter, introducing new, nutrient-rich organic material into the soil; this gradually makes the soil more amenable to supporting other species too.

However, once established, the effects of this invader are mixed. Despite enriching soils and making habitats more suitable for other species, lupine does not share well with others. The overall number of plant species in areas invaded by lupine actually decreases as  the quick-growing, tall lupines shade later-emerging, shorter native plants and outcompete them. Lupines also produce a wide variety of alkaloid compounds in their leaves that can persist in soils and are thought to negatively impact the germination of seeds from other plant species. By preventing seeds from germinating around them, lupines further decrease the biodiversity in areas they invade.

And it’s not just other plants that can be negatively impacted by lupine invasions. In Finland, lupines have a bottom-up effect on the ecosystem, decreasing the number and diversity of moths and butterflies occurring in invaded areas, as they are a poor food source for these insects. Nevertheless, not all species suffer from the presence of these invaders. With their large concentrations of showy flowers, lupines can act as “magnet species,” attracting and sustaining large populations of bumblebees, which can then increase the number of pollinator visits to co-occurring native plants with potential indirect, positive effects on the bees’ reproductive success. Still, as beautiful as they may be, the lupines out my window in Norway are disturbing the ecosystem and would be better left at home in Canada!

—Dr. Marie Davey is a researcher in mycology and molecular ecology at the University of Oslo with a PhD from the University of Alberta. She is interested in all aspects of science and its intersection with society, and has also worked as a science policy advisor and environmental consultant. A transplant to Norway, she’s still maple leaf Canadian to the core. When she’s not in the lab, she’s wandering the forest and the mountains being fascinated by the plants and fungi around her.

A version of this article originally appeared on The BioPhiles.

Featured image: Lupinus polyphyllus is a wildflower in Canada, but it is an invasive species in Europe that has taken over ditches and roadsides with its beautiful blossoms. Photo by Merja Partanen.