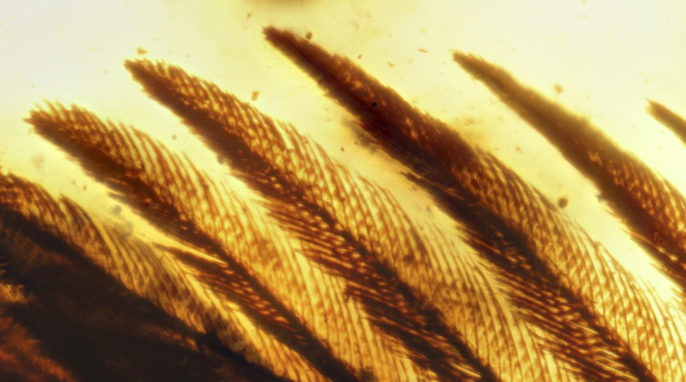 An ancient bird wing has been found preserved in amber. Learn about it from a paleoartist, or scientific illustrator, who recreates extinct creatures.

I am a paleoartist—a scientific illustrator whose job is to combine paleontological research with inference, logic, and a healthy dose of creativity to produce illustrations of long-extinct organisms. We are uniquely tasked with translating research into representations of real creatures that the public can see and experience as animals that lived and breathed, rather than as movie monsters or collections of measurements and static bones. This is no easy task.

Accuracy always takes precedence, and the rendering must closely conform to the glimpse of reality granted to us by the preservation of deep time. Sometimes we are blessed with an entire skeleton, as in the breathtaking Berlin specimen of Archaeopteryx. Other times we must make do with scattered remains of multiple specimens to piece together a likely visage of the animal in life, as in the giant dromaeosaur Dakotaraptor. In many cases inference—from related dinosaurs, to modern birds, to the logic of evolutionary niches—plays a salient role. Even when as beautifully articulated as the Berlin specimen, we are limited to the story that bones and imprints alone can tell us.

This is, granted, an increasingly complex and fascinating story. Once in a while, however, nature affords us a brief glimpse into deep time that does not rely on the whims of regular fossilization. And the results are nothing short of magical.

Such is the case in a new study by Lida Xing and colleagues published June 28 in Nature Communications. Here, for the first time, we get to see the tiny bones, fingers, and soft tissue—including actual plumage—of Mesozoic theropod wings preserved in Burmese amber. These delicate little wings likely belonged to juveniles of a primitive group of birds called Enantiornithes, which went extinct at the end of the Cretaceous. The discovery preserves follicles, feather tracts, and apteria (the featherless portion of birds’ skin).

Fossilization rarely preserves soft tissue, which is quickly expunged by decay, predators, wind, and weather. But if an animal dies and is quickly exposed to an anoxic environment—one devoid of oxygen, which most agents of decay rely upon—it is possible for the soft tissue to be preserved in a relatively unchanged state. These new specimens grant us an unprecedented detailed view of some of this soft tissue.

Besides providing novel insight into the form and function of enantiornithean wings, the specimens also show that many paleoartists have been right, some for decades, about how to reconstruct the strange hands of these long-dead dinosaurs.

The two samples hail from the Kachin Province of Myanmar and date to about 99 million years old. Due to their proximity and their similar size, proportion, and morphology, they are thought to be from the same species—perhaps even siblings from the same nest, trapped together in the sticky sap, or the grisly remains of lunch cast off by a predator.

Both specimens preserve incomplete ulna and radius (forearm) and the three claw-tipped digits of the hand, the second of which supports highly asymmetrical primary flight feathers. The forearm, as in other birds and birdlike dinosaurs, supports the secondary feathers. The specimens also preserve an alula—the little “winglet” covering the first finger of modern birds—and a suite of coverts, which overlap the flight feathers and help to create an aerodynamic surface. X-ray micro CT analysis reveals a microstructure complex of barbs and hooklet-bearing barbules on the asymmetrical remiges, which enabled the feathers to lock together in life. These are adaptations for flight, which is clearly what these wings were made to do.

These specimens also uniquely preserve the remnants of coloration, as revealed by microscopic analysis. One specimen shows a dark brown alula contrasted against paler flight and contour feathers ranging from dark to nearly white. Here exists a faint suggestion of a pale “spot” among the feathers below the alula, a feature shared by the other specimen as well. Banded pigmentation, reminiscent of a modern hawk or owl, is visible on the alula. This represents the first example of pigmentation in a Mesozoic dinosaur that is not reliant on interpolation of fossilized melanosomes (pigment cells).

Taken together, the structure, arrangement, and color patterns of feathers on both specimens bear little distinction from the wings of modern birds. The main feather groups, attachment points, and shape all seem within the range of what we see on birds outside our kitchen windows. Of course, one major feature serves as a shadow of these animals’ dinosaurian origins: The bones beneath the feathers are unfused, the fingers hooked with powerful claws. What might these modern-feathered birds have been doing with such clearly ancient hands, and how would they look in life?

The Predictive Power of Paleoart

It has been popular in decades past for illustrations of feathered dinosaurs to show an ineffectual “half-wing,” often with the scaly, clawed fingers dangling awkwardly from a rounded wrist. The reasoning, when any is given, is usually that a dinosaur with clearly unfused, clawed fingers must have been using them for something, whether it be predation, climbing, or something else altogether. Intuition tells us that scaled hands free of the trappings of plumage are necessary for any functional utility, and studies showing otherwise have often been ignored by mainstream reconstructions.

But a small contingent of paleoartists has dared to “bird-up” those feathered dinosaurs that straddle the line between non-avian and avian, and this has included a movement toward dispensing with the scaled and spindly fingers. Evidence from especially birdlike maniraptorans including Microraptor and Anchiornis indicate that at the very least, those clawed and unfused fingers were probably covered in feathers. Many paleoartists have gone further by positing that the fingers were entirely subsumed in the feathers of the wing, perhaps scarcely visible in life, and perhaps even wrapped in a soft-tissue patagium and relatively immobile. And while fossil impressions of myriad paravians show the second and third fingers clearly adhered, the lack of soft tissue has rendered this little more than intelligent speculation.

Until now: For here, in Burmese amber, we have the first evidence of skin snugly binding the second and third finger together, with the entire manus wreathed in feathers. In life, these tiny basal birds would have shown little sign of discrete naked fingers as they flew and folded their wings, only the hint of claws protruding from feathers—if even that.

Of course, these were flying avialans, not hulking ground-bound predators like Velociraptor and Troodon. But the bones of their hands—with three ostensibly mobile digits, large claws, and closely adhered second and third fingers—look essentially identical to those of these two amber-encased specimens. We also have evidence of quill knobs on the arms of Velociraptor, attachment points for what were likely very large, robust feathers. “We’ve known maniraptoran hands were grappling hooks with limited digit mobility for a while now,” says Matt Martyniuk, a paleoartist who has long since dropped the scaly, dangly-finger paradigm in his renditions of these animals. “The fact that Enantiornithes were volant, had soft-fused digits, and retained huge manus claws and functional phalangeal joints means we need to seriously rethink what maniraptorans were doing with their forelimbs.”

This new finding is by no means the last squawk on the form and function of Mesozoic maniraptoran hands. The breadth of diversity in the size, habits, niches, and adaptations of those extinct animals with similar hands ensures a certain amount of variation in functioning. But if you are concerned with how these dinosaurs looked and used their wing-hands in life, it is worth paying attention to these tiny, unfortunate hatchlings and their strange shrouded hands. And if you are a paleoartist aspiring to accuracy and unwilling to follow tired old trends: Don’t be afraid to feather them up!