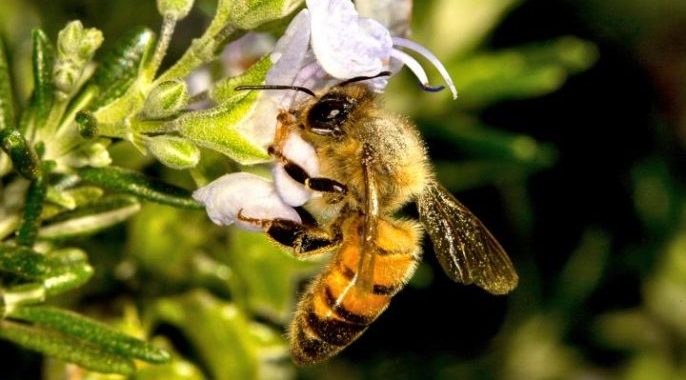 When was the last time you ate an apple? We rarely think about how fruits develop; apples, as well as many other fruits, nuts, and vegetables we take for granted, are the result of pollination by honeybees. Global demand for food production is surging, but in the past decade, honeybee colonies worldwide have been plagued by colony collapse disorder, a mysterious phenomenon where most of the worker bees in a colony vanish, leaving behind the queen bee, ample food stores, and a few nurse bees to look after the queen and the baby bees, known as larvae.

Many factors have been blamed for causing colony collapse disorder: use of certain pesticides, infection by parasites and viruses, changes in the environment and climate, and lack of food. The last cause, poor nutrition, has been studied mostly for adult honeybees, but, until now, little was known about how honeybee larvae cope with malnutrition. In two new studies, scientists discovered something rather unexpected: starvation as larvae actually made honeybees better able to cope when deprived of food as adults.

“Surprisingly, we found that short-term starvation in the larval stage makes adult honeybees more adaptive to adult starvation,” says Ying Wang, the lead author of both studies and assistant professor from Arizona State University. This is the first study showing that social organisms can predict and adapt to environmental stresses in the future, notes Wang.

Honeybees are social organisms; they live in colonies that consist of a queen, male drone bees responsible for fertilizing the queen, and thousands of female worker bees that help maintain the nest, collect food, and feed the developing larvae. A larva that will develop into the queen bee is fed with plenty of high-quality food, whereas larvae that are destined to become workers are fed with smaller amounts of lower-quality food. Since each individual has its own role, the colony cannot function without each type of bee.

Wang’s team collected honeybee combs with developing larvae and subjected the last-stage worker larvae to starvation for 10 hours. After the larvae developed into adults, the researchers measured the bees’ body mass, survival when exposed to three days of starvation, glucose and other sugar levels, energy reserves in the form of glycogen and lipids, and hormone levels, comparing them with honeybees that were well fed as larvae.

When the starved larvae emerged as adults, they were initially smaller than larvae that had been well fed, but they gained body mass faster during the first few days of life as an adult, eventually reaching the same body mass as their well-fed counterparts in seven days.

Adult bees that had been starved as larvae showed a reduced perception to sugar, which means they were seeking richer sugar syrups than their well-fed counterparts. The larval-starved adults also had higher levels of juvenile hormone, which can help them respond to stresses such as starvation, temperature changes, and injury.

Were the honeybees that were starved as larvae showing these metabolic changes during normal times when food supplies were abundant or only when they encountered periods of famine? To find out, Wang’s team collected more adult bees that had been starved as larvae and deprived them of food for 12 hours; the team then measured their metabolic rates, blood sugar levels, and metabolic reserves.

When faced with starvation, adult bees that had previously been starved as larvae were able to lower their metabolic rate to reduce energy consumption during the later stages of starvation. These bees were also better able to maintain their blood glucose levels during starvation and switch to other carbohydrates as fuel sources faster than bees well-fed as larvae.

“This suggests that they have an anticipatory mechanism like solitary organisms do,” says Wang. In the anticipatory mechanism, also known as the “predictive adaptive response,” it is theorized that when an organism faces stresses during development, it develops an adaptive response, which prepares it for similar stressors later in life. “Our study suggests that predictive stress responses may play a role in division of labor in honeybees,” writes Wang.

Honey-producing bee colonies in the US have plunged from about 3.2 million in 1988 to 2.7 million in 2014. These findings can help researchers find solutions to colony collapse disorder. “Manipulations during development may be able to increase the bees’ resistance to different stressors, much like how an immunization works,” suggests Wang.