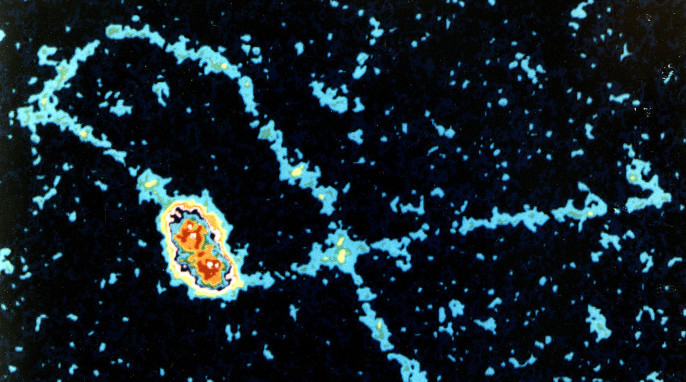 In ancient Greece, a clever disguise and a bit of greed was all it took to defeat the city of Troy. Now, scientists from Ohio State University have taken a trick straight out of Greek mythology to win an important battle against drug resistance in acute myeloid leukemia (AML) cancer cells.

The scientists crafted a cancer-fighting Trojan horse by making folded DNA and filling the tiny pockets with anti-cancer drugs. The DNA Trojan horse was then able to sneak into drug-resistant cancer cells and unload its deadly (to cancer cells) cargo without being noticed.

To make the Trojan horse, a team of scientists led by Patrick Halley built rod-shaped DNA nanostructures using a folding technique called DNA “origami.” The rods’ four holes were then loaded with daunorubicin, a type of cancer drug used to treat AML.

Like many types of cancer, AML cells have become resistant to the drugs commonly used to combat them. The cancer cells quickly detect drugs and pump them back out of the cells before they can start to do damage. The outcome of an AML diagnosis is generally poor. In recent years, scientists have turned to nanostructure drug delivery to fight drug resistance because it has the potential to directly target cancer cells without harming healthy tissue or causing side effects.

In the case of the DNA Trojan horse, “hungry” cancer cells mistake it for normal DNA and take it in to be used for new cell parts. When it enters the cell and starts to break down, the drug is released. The cells eventually notice the intruder and begin to pump the drug back out, but by then there is simply too much of the drug inside the cell and the damage is done.

Like bailing water out of the Titanic with a teaspoon, scientists believe that the pumps cannot work fast enough to remove the drug before it takes effect. It is also possible that the cell just cannot get to the hidden drugs in order to pump them out. Either way, the end result is the same: the drug is released and the cell’s ability to reproduce slows down quickly. If the cancer cells cannot reproduce, they eventually die.

Scientists measured the amount of drugs taken into the cells by using fluorescent markers and taking pictures using high-powered microscopes. They compared how the cells reacted to the Trojan horse drug delivery versus drugs delivered in the normal way. They found that cancer cells treated using the Trojan horse method were less likely to reproduce. By letting drugs enter and stay longer in the cells, the DNA Trojan horse slows cell production better than conventional drug delivery.

When fighting an enemy such as cancer, it helps to know and exploit its weaknesses. The Ohio State University scientists hope that better drug delivery options, including the Trojan horse method, can ultimately be used to treat other drug-resistant types of cancer in a safe, efficient, and deliberately sneaky way.

Emily is freelance writer and blogger whose training and passions lie at the intersection of science and education. She has worked as an outdoor environmental educator, a science teacher, and a professional communicator and trainer. You can read her blog on serious science in a not-so-serious style at www.riseandsci.com and follow her on Twitter @riseandsci.

Asthma, Genetics, and the Environment

Boston is Wicked Hot: Here’s What They’re Doing About It

Anthropocene mass extinction: are we there yet?

Boston is Wicked Hot: Here’s What They’re Doing About It