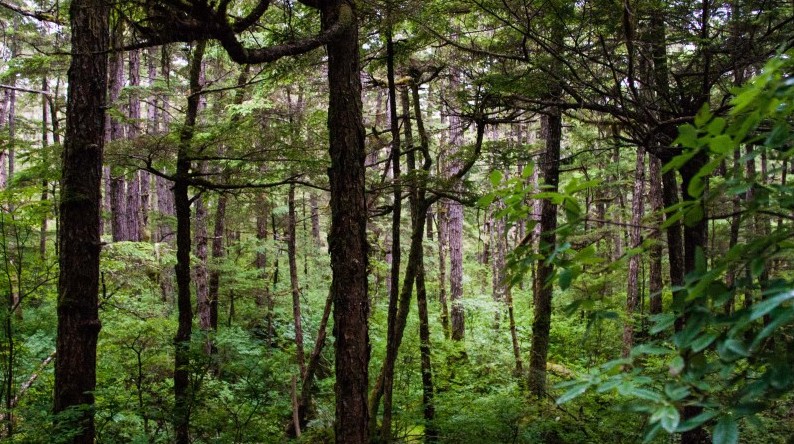 Nicholas is a graduate student of Ecology and Evolutionary Biology at the University of Michigan in Ann Arbor, a member of the Ecological Society of America and the American Geophysical Union, alumnus of the STEM Posse program at Brandeis University, and winner of the Benjamin A. Gilman International Scholarship. Contact: nmedina@umich.edu.

The US is the second-largest emitter of greenhouse gases after China, and President Obama has called climate change a “national and global security threat.” Now, we urgently need to understand why our fossil fuel use will have long-lasting effects on global climates and our forests. We need to reduce our societal CO2 emissions quickly and substantially.

Forest ecosystems are one of the largest stores of carbon on Earth. Consisting of old trees and deep, rich soils, the forests are very good at absorbing greenhouse gasses from the atmosphere. However, our forests may not be able to protect us from climate change as much as previously thought. New data reveals natural limits to the rates at which forests can remove excess CO2—the most persistent greenhouse gas—from our atmosphere.

Currently, forests are said to grow enough to remove 2.4 petagrams (about the weight of 343 million elephants) of CO2 every year from our atmosphere via photosynthesis. This equals almost one third of total emissions produced by humans—9.1 petagrams—so remember to thank a forest, today!

As forests age, the rate at which they remove CO2 from the atmosphere declines. This is largely due to the types of trees that dominate older forests compared with younger forests. As a forest ages, faster-growing, light-loving tree species (like aspen and paper birch) are gradually replaced by species that produce more dense wood, tolerate shade better, and grow more slowly (like maples, oaks, beeches, and pines).

However, recent studies that look at the effects of future environmental conditions on forests show that age will likely not be the only thing limiting forests’ ability to absorb CO2. There are other things going on in the leaves and soil.

Ecologists and foresters used to think that the rate of forest growth would continue to increase as global atmospheric CO2 levels rose.

This year, however, Peter van der Sleen et al. reported that Earth’s tropical forests have not shown signs of increased growth in the last 150 years of rising atmospheric CO2 levels. Instead of making more wood or leaves (the tissues that are responsible for storing most of the recently captured CO2 in forests) the trees produced more fruits and flowers. This might be because the trees just couldn’t get enough nutrients to grow faster.

These results suggest that while Earth’s forests might absorb extra CO2 for 10 years or so, after that the trees begin to really need other nutrients. Afterward, they may end up using water more efficiently to compensate for nutrient levels that are too low to support growth. Thus, forests may likely not able to offset continued human-caused CO2 emissions in the future because their behavior in the global carbon cycle will vary.

Even if forests did find enough the nutrients and water to grow faster in a higher CO2 climate, that extra CO2 would be stored in their leaves. After the leaves die and decompose, the extra carbon would be released back into the atmosphere.

Soils are very important because they help us (concerned citizen scientists) track where atmospheric CO2 goes after it is absorbed by plants. Soil carbon can remain stored for millennia in the form of decaying material that eventually turns into brown, amorphous, nutrient-rich soil.

There is an international network of ongoing experiments called DIRT (Detritus Input and Removal Treatment) showing that the amount of soil organic matter remaining in forest soil changes over several years depending on how much plant litter—or leaves and roots—are decaying each year.

Carbon in soil can decline because microbes, like bacteria and fungi, live in and eat the plant litter. However, the dead leaves dropped on the ground in an average year add more carbon to the forest floor than the microbes can process.

Here is the really crazy part: If in just one year, the trees produce and drop twice the usual number of leaves, you don’t get twice the organic matter or carbon. In fact, soil organic matter accumulates over time as if only one year’s worth of leaves were falling each year.

How Does this Happen?

Just as humans can last a week without food but only three days without water, soil microbes need nitrogen molecules to build proteins so that they can break down all of this extra leaf carbon. So, they mine for nitrogen to sustain their new ‘sugar high’. Conveniently, nitrogen is the second-most abundant molecule in soil organic matter after carbon.

However, this means that the soil microbes end up working their way through the soil organic matter that has built up in the forest soil throughout all of last year to get the nitrogen they need. You might imagine that these soil microbes ‘mosey around’ carbon atoms to find nitrogen. As they do this, they keep having to break apart carbon bonds by converting them into energy or CO2.

If you compost at home, you probably know that you need an appropriate balance of fruit cores to leaves: your pet microbes need enough nitrogen for the amount of carbon that surrounds them. If you have prior experience trying to compost, you may have noticed that if this ratio is off, you will end with either a pile of leaves (too much carbon) or, what might be more common, a pile of rotting and fruit-fly-infested fruit cores (too much nitrogen). Good compost never has to smell bad!

This loss of older, already-stored carbon from forests’ soil organic matter as a result of more plant litter is called soil priming. It is happening in temperate forests around the world. Soil priming has also been shown to occur in tropical forests after only seven years and can last for many decades.

These new findings reveal the limited ability of forests to save our climate under ‘business as usual’ CO2-emission cases over the next few decades or even centuries. We need to adopt ambitious CO2 emission reduction goals.

Featured photo of a wooded area in Alaska, USA courtesy of Max Goldberg