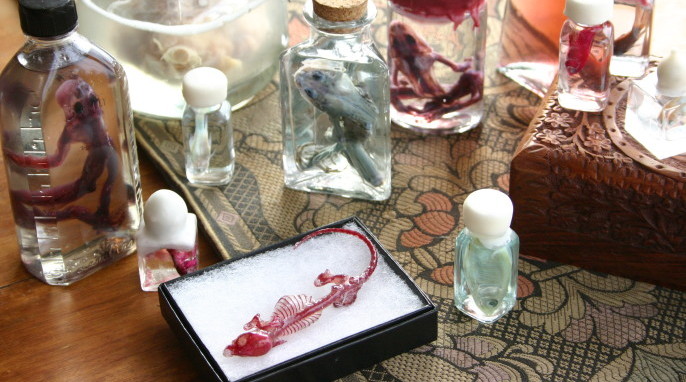 Diaphonization, or the artful science of preserving soft-tissue scientific specimens, is something few have heard of but many have seen.

The dead fish, frogs, and snakes floating in the vials are like curiosities from the Victorian era. But unlike the stuffed and mounted animals of taxidermy, these specimens are transparent, offering a literal window into their skeletal structure. The rich reds, purples, and blues that highlight their bones and cartilage have been produced by the process of diaphonization, which blends art and science together so skillfully it revives the dead with new life and color.

Officially developed by scientists in 1977, diaphonization is also referred to as “clearing and staining” after its dual-action mechanism. Clearing renders the animals transparent and is achieved by bathing the specimens in a soup of trypsin, a digestive enzyme that slowly breaks down flesh. The dyes alizarin red and alcian blue are most commonly used in the staining of bone, muscle, or cartilage, which are soaked according to the desired outcome.

The results are at once visually striking and chemically intensive, according to biologist Sadie Stednitz: “The appeal of diaphonized specimens is that they are beautiful physical objects that also give us an appreciation for biology.”

Stednitz is the owner of California-based Studio Pollex, which sells diaphonized pieces alongside more familiar taxidermy. She notes, “I work primarily with animals [that are] available as dissection specimens: rats, mice, frogs, fish, and snakes.”

Not all creatures are suitable for the procedure. Feathers and fur belonging to many large birds and mammals get in the way and have to be removed. Other factors are also important.

“A large rat could take upwards of six months to complete, so time is a big consideration. The denser and larger the tissues, the longer it will take for any stains to reach them,” explains Stednitz.

“Anything that affects the chemistry of the dyes can [also] cause issues. For example, some dyes will only work in an acidic solution, and some animal tissues do not fare well in that kind of environment.”

The diaphonization technique is most often seen with specimens less than a foot in length. Thin-skinned amphibians, fish, and reptiles work especially well, although young mammals and birds are also suitable.

Fetal organisms, in particular, prove useful in the laboratory. With a crystal clear view of the subject’s internal features, scientists can observe the impact of environmental contaminants on unborn animals, such as extra limbs and other deformities, offering crucial insight into how these chemical pollutants affect normal growth and development.

“Comparative anatomy is another application; if you want to visually demonstrate the evolutionary relationships between different species, the skeleton is a good place to start because it is easy to see how one body plan can be modified to suit many different tasks,” Stednitz says.

Despite its merits, diaphonization is not widely used in the scientific field. Advancements in imaging technology have rendered the practice all but obsolete, though it is expanding as an art form.

Among the public, the technique is not well known aside from a handful of collectors who seek out curios. However, that trend is slowly changing with the success of Studio Pollex and the exposure of other diaphonists such as Iori Tomita, Brandon Ballengée, and Adam Summers.

Natural history museums also house cleared-and-stained specimens, many of which are in ichthyology (fish) or herpetology (reptiles and amphibians) collections.

Meanwhile, Stednitz continues to balance art and science to find the ideal mix. “I have found that what makes a good scientific specimen is not necessarily what will make a good art piece, but there is a lot of intersection between the two. Visibility, color, and presentation are important factors for both academic and artistic specimens,” she says.

So, what do you think of the artful science of diaphonization? Is it an art or a science, or little bit of both?

Ansel Oommen is a freelance writer, multimedia artist, and citizen scientist residing in New York City. He writes in-depth pieces about the intersection of science and art.