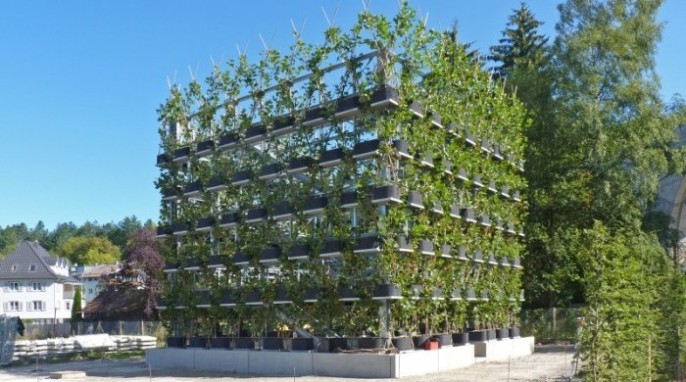 An ancient practice combines art and science, humanity and nature, to deliver an innovative contemporary creation through tree-shaping: Arborsculpture.

Our Earth is hungry for solutions. From climate change and deforestation to overpopulation and pollution, our lives are ever dependent on our delicate dealings with the environment. But amongst the grassroots we are seeing a resurgence of an ancient practice of combining art and science, humanity and nature, to deliver an innovative contemporary response: Arborsculpture.

A Brief History of Tree-shaping

Dating as far back as the sixteenth century, tree shaping has been hinted at in paintings and literature, but it was not until Axel Erlandson, the father of modern arborsculpture, that the art form truly flourished. As a young man, Erlandson was inspired by the sight of two conjoined branches in a hedgerow on his property. As a result, he began experimenting― designing and sculpting over 70 different trees into various stunning horticultural and architectural specimens. He would then go on to open a roadside exhibition in Scotts Valley, California in 1947, debuting his curiosities in an aptly named Tree Circus.

What Erlandson had observed and used to great effect was a natural form of grafting known as inosculation. The phenomenon occurs when trunks, roots, or branches in close proximity gradually fuse together. It can occur among the branches of a single tree or neighboring trees of same or even different species. Over time, as the limbs grow, they exert pressure similar to the friction between two hands rubbed against each other. This causes the outer bark to slough off, exposing the inner tissue or cambium, and allowing the vasculature of both trees to intermingle. In essence, the trees join their lifeblood.

In addition to grafting, tree-shaping also employs pruning, bending, weaving and bracing to create the dramatic loops, twists, and knots evocative of the art form. Many of the techniques are borrowed from related horticultural practices such as bonsai, espalier, and topiary. However, not all species are suitable for such creative treatment. Tree-shaping trees must be flexible, vigorous, and easily grafted (thin bark). Notable examples of trees used for arborsculpture are willow, sycamore, poplar, birch, and Persian ironwood.

Could You Grow Your Own House?

Currently, development of this art form relies on the trial and error projects of a few pioneers in the field. The modern movement is so young in fact, that the term arborsculpture itself was coined as recently as 1995 by Richard Reames and Barbara Delbol in their book How to Grow a Chair: The Art of Tree Trunk Topiary. True to the book’s title, living furniture is a popular application for arborsculpture. Imagine being able to grow a living house or landscape architecture.

The ability of growing trees to incorporate foreign material such as metal and glass further solidifies arborsculpture as a viable green alternative for use in urban design.

One exceptional instance of this type of urban tree shaping lies in Germany. There, architect Ferdinand Ludwig’s Baubotanik, or Living Plant Constructions, showcases the brilliance of botanical engineering at its best. Among his creations are a three-story willow tower, an osier willow footbridge, and a silver willow bird watching station. The Plane-Tree-Cube Nagold, a building that incorporates live sycamores, is accessible to the public. Plans for a banyan fig-inspired living bridge are also in the works.

Ludwig explains, “I came in touch with some historic examples of living architecture while I was a student and was fascinated from the first moment on. The vision is a new way of integrating trees in architectural and urban design.”

Ludwig’s vision has paid off, attracting attention in Archiprix International, a competition that judges projects in urban design and landscape architecture. His work has also won awards for ‘Deutschland, Land der Ideen’ (Germany: Land of Ideas) and ‘Übermorgenmacher’ (Creating the Day after Tomorrow).

Tree-shaping may offer some creative eco-solutions. Unlike their dead lumber-based counterparts, living architecture continues to combat soil erosion while providing oxygen, sustenance, shelter, and habitation. An integral part of the ecosystem, trees can convert carbon into biomass, mitigating the effects of climate change. Even when harvested, living architecture persists as a source of aesthetic wonder.

When asked how he was able to shape trees, the late Axel Erlandson often replied, “I talk to them.” Indeed, when mankind and nature work together, the results can be mutually impressive. Rather than cutting down trees, arborsculpture seeks to cultivate a natural passion for the future of our world and our environment—a greener step toward a more sustainable balanced tomorrow.

Ansel Oommen has also explained The Artful Science of Diaphonization.

An earlier version this article was previously published by Science Connected.