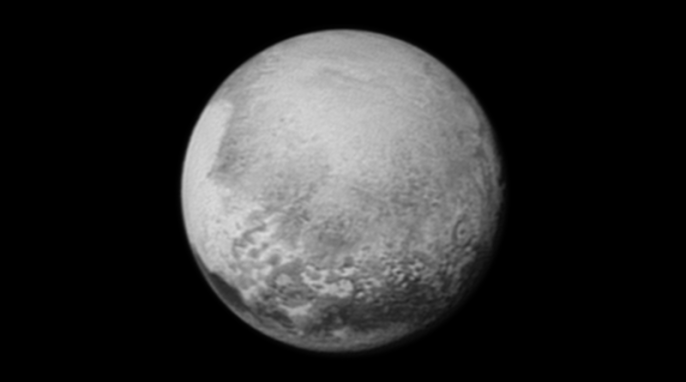 NASA’s spacecraft New Horizons entered its closest approach with Pluto yesterday, as part of its nine-year mission to study the last of the nine “classical” planets in our solar system. Later today, we will receive the first “phone home” communication from the spacecraft.

Here on Earth, scientists are eagerly awaiting today’s transmission from New Horizons. One of them is Noemi Pinilla-Alonso, an astrophysicist at the University of Tennessee, Knoxville and formerly of NASA. Our friends at ResearchGate recently chatted with Pinilla-Alonso about her hopes and plans for the long-awaited data.

Waiting to Hear from Pluto

ResearchGate: How does it feel to be so close to the end of the nine-year mission?

Noemi Pinilla-Alonso: It is amazing, overwhelming, and exciting. As the last few months have passed I have been dealing with a lot of anticipation, and now finally we can wake up every day with a new press release that brings new data, and we still want more. I am definitely very grateful to the New Horizons team for making all of this material available for us to enjoy.

RG: As the last of the nine classic planets to be visited, what do you hope New Horizons can discover about Pluto?

NP: I expect the level of detail that we get from the new surface maps to take our breath away. I remember the images from Triton’s surface taken by Voyager 2, those are impressive, but New Horizons is happening now. New Horizons is at least 20 years more advanced than Voyager, and we all know how fast technology has advanced. On top of that, the mission is designed specifically for this encounter with the Pluto system, and it has seven instruments on board. When we put all of that information together (surface geology, surface composition, atmosphere, interior, irradiation) Pluto will be by far the best-known “minor” icy object in the outer Solar System.

RG: In the few hours that New Horizons will have to gather data as it zips past Pluto, what could go wrong and do you know how this has been prepared for?

NP: I try not to think about what could go wrong tomorrow. I am sure the team has prepared for all imaginable outcomes, in fact, today they will have already downloaded most of the acquired information in preparation for any possible “bad” ends to the encounter. Personally, experiencing this from outside of the stressful control room, I prefer to think that everything will go smoothly.

RG: How will New Horizons help you characterize and understand the surface of Pluto? Why is this information important?

NP: We have been studying the surface compositions of trans-Neptunian objects since the 90s when the first one (other than Pluto) was discovered. This is a difficult task, because these objects are far away, cold and faint in the distance. However, we have had some hints that they are formed of ices, some volatiles (methane, nitrogen, and carbon-monoxide), water ice, dark material (simple and complex hydrocarbons), and probably amorphous silicates. However, the level of detail that we can obtain from ground-based observations is not that great.

The case of Pluto is a bit different. Because it is larger, it looks brighter to us, it has been monitored in the visible and infrared wavelengths for decades. Pluto has shown us that it has an ever changing surface, in terms of diurnal and secular variation. New Horizons will provide a powerful snapshot of the dwarf planet, as the maps that the mission has already shared with us show, but after 2015, we will go back to observing the planet again from ground-based telescopes. All of this data will allow us to determine the distribution of dark and red material on the surface of Pluto, as well as the abundance of volatiles. Collecting data from ground-based telescopes at the same time as New Horizon’s flyby will also help us link the first data from Pluto with its primeval appearance, as well as help us connect future telescopic observations with its past behavior.

RG: You mention in your paper’s abstract that you hope to “shed some light on the local interaction between the surface and the atmosphere” of Pluto. Can you explain this interaction and how New Horizon’s information will help?

NP: Pluto’s surface temperatures are so extreme that some materials which exist as gases in Earth’s atmosphere instead appear as ice on Pluto’s surface. We typically refer to these materials as volatiles (methane, nitrogen, and carbon-monoxide).

Under the Sun’s irradiation, these ices sublimate (pass to gas state) and some become part of Pluto’s atmosphere. On the coldest regions of Pluto’s surface, these gases turn into ice again, and condense on the surface. This means that there is a “cycle”, a continuous exchange of material between the surface and the atmosphere of Pluto. Our observations are collected from different regions on the surface. This will be crossed with the temperature and albedo maps of Pluto so we can study the relationship between the abundance of volatiles and other physical characteristics of the surface. All of this information is extremely useful in making models that can explain Pluto’s atmosphere.

RG: Do you think Pluto could be upgraded to a planet again as a result of this mission?

NP: First let me say that I do not think that Pluto being called a dwarf-planet is a downgrade. Why would a planet be more interesting than a dwarf-planet or an asteroid or a moon? Would you be more interested in the results of this mission if Pluto were officially a planet? I wouldn’t. Expanding our knowledge of this peculiar icy object is so rewarding that I do not think it matters what “we” call it.

Honestly, I cannot imagine Pluto worrying about which category we think it is. With that said I do not think the International Astronomical Union (IAU) wants to open that debate up again, discussing what to call Pluto instead of trying to explain why it is as it is would be a complete waste of time.