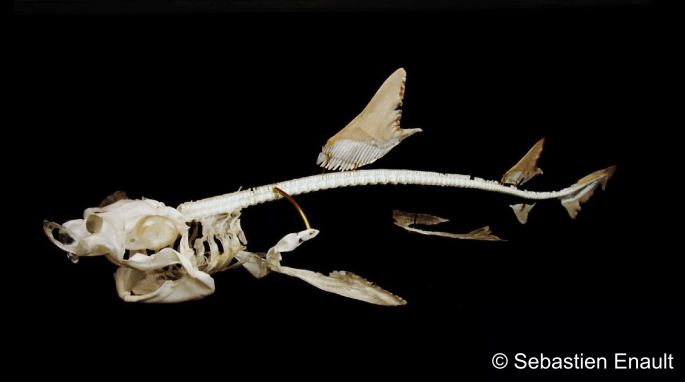 What are shark skeletons made of?

The skeleton of modern sharks, rays, and skates consists of cartilage, a connective tissue that is lighter and more flexible than bone. Most people closely associate the skeleton with bone, and are familiar with the skeletal structure of many ancient and modern vertebrates, which are beautifully described in a vast number of anatomical works and frequently displayed in most natural history museums.

However, while sharks and rays are very popular in aquariums around the world, few people actually know what their skeleton looks like beyond the fearsome set of jaws made famous by the movie of the same name.

What led you to prepare natural history specimens?

I have been interested in the collection and preparation of natural history specimens for a very long time, and when I enrolled at the university to study biology, I started cleaning the skulls and skeletons from various animals. I was so fascinated by their skeletons that I then completed a master’s degree in vertebrate paleontology, being one of the only scientific disciplines today that relies heavily on skeletal material and comparative anatomy. While working on my degree, I cleaned all kinds of skeletal specimens, mainly reptiles and mammals, but not many fish, and even fewer cartilaginous ones, except a few sets of jaws.

Then I started a PhD project dealing with the teeth of fish, and my project changed over time to encompass other mineralized structures in their skeleton. While their skeleton is made exclusively of (sometimes heavily calcified) cartilage today, fossils show that cartilaginous fishes actually possessed the ability to make bone, which they lost over the course of their evolution. How it happened represents a fascinating biological and evolutionary question, which requires taking a closer look at the development of the skeleton in these fish.

The project gave me the opportunity to use some very cool techniques, including X-ray microtomography and also clearing and staining techniques to investigate the development of various skeletal pieces. The nice part is that, in addition to being very informative, most of the data is also very aesthetic. Cleared and stained specimens especially have been the focus of several expositions in recent years, which is funny since this technique dates back to the early twentieth century.

How have you improved upon skeleton preparation techniques?

There is actually very little technical literature on the subject, and it is very difficult to find good references. There are only a handful of (usually old) anatomical works, so I was mostly starting from scratch, except for my experience working on other vertebrates. My work gave me access to many different shark and ray species, and I developed my own techniques, involving careful dissection followed by whitening and drying the specimen in strong ethanol. The major challenge is minimizing the shrinking and warping of the soft cartilage during the drying process. The most delicate parts, such as the gills and fins, can be a real challenge. I also took extra care to save skeletal structures that are easily missed, such as the sclerotic capsules (eye cartilage) or the labial cartilages.

What are your prepared specimens used for?

Beyond the obvious use as research material, such specimens allow for first-hand observation, handling, and make for much more exciting and informative displays and educational material than a set of jaws alone.

Sebastien has a PhD in developmental biology and paleontology from the University of Montpellier, France. He researches skeletal tissue evolution in cartilaginous fishes. He also prepares specimens for scientific study and public display. We ask him about his fascinating work. Contact: s.enault@hotmail.com.

August 2, 2021July 27, 2021 Science Connectedpublic health, smartphone, technology, water pollution
The touchscreen on your smartphone now has a new use that can save lives: It can detect toxic elements in a...