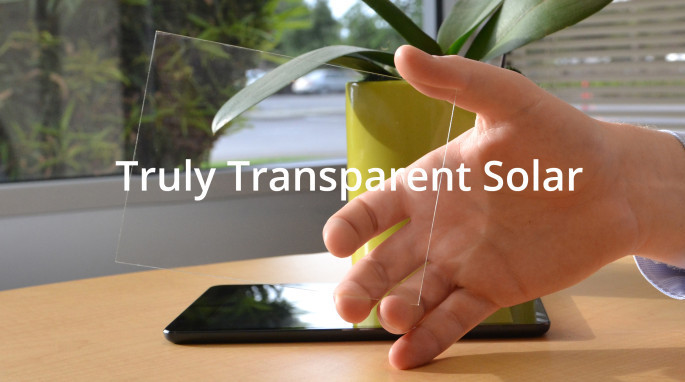 A company is making completely see-through solar energy panels for our phones and tablets. Next, for our car and home windows.

A team of researchers at Michigan State University has developed a new type of solar concentrator that, when placed over a window, creates solar energy while still allowing people to see through the window. It is called a “transparent luminescent solar concentrator” and it can be used on buildings, cell phones, and anything else that has a clear surface.

According to Richard Lunt of MSU’s College of Engineering, the operative word in this story is “transparent.” One year ago, researchers predicted that, while the technology was at an early stage, it had the potential to be scaled to commercial or industrial applications with an affordable cost. They were right.

Now, Ubiquitous Energy Inc., located in California’s Silicon Valley, has unveiled its award-winning, transparent, energy-harvesting technology. The so-called ClearView Power was showcased in the Innovation Zone (I-Zone) at Display Week 2015, the Society for Information Display’s international symposium and exhibition. Lunt is a co-founder of the company and serves on the scientific advisory board. 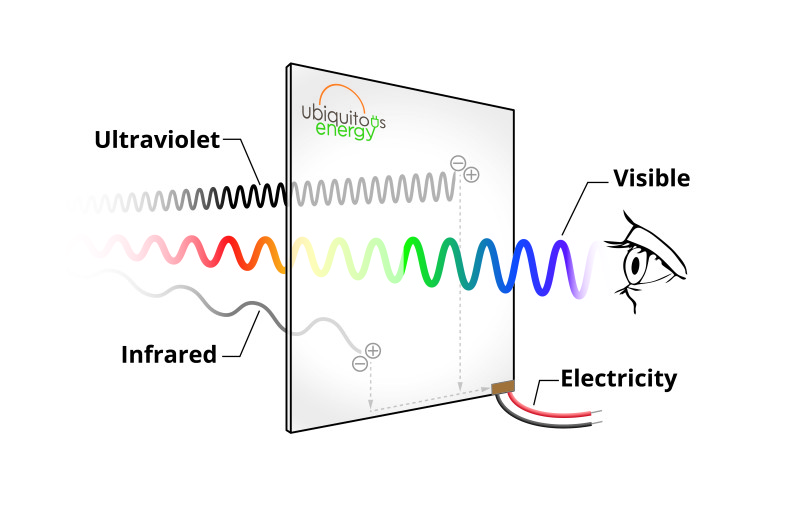 ClearView Power is a technology that overcomes the fundamental limitation of traditional solar cells. Until now, solar cells have been opaque, which limited where they could be mounted (i.e., mainly on rooftops). Previous attempts to make these solar cells transparent have focused on allowing only a portion of visible light to pass through by either thinning the photoactive material or segmenting cells across the module area. This approach required a compromise between transparency and efficiency and, in the end, neither was optimized.

“Displays and batteries are getting better, but we believe mobile device makers will be looking to harvest energy during operation to stretch time between charges,” says Bob Raikes, principal, Meko Ltd. “An energy-producing transparent coating such as this could be an ideal way to do this.”

By contrast, ClearView Power transmits light visible to the human eye, absorbing only ultraviolet and near-infrared light. This invisible film is applied to electronic devices, windows, and other surfaces to generate electricity without affecting design or aesthetics. Implemented as a fully transparent film that covers a device’s display area, ClearView Power is a truly transparent solar panel that can overlay the surface of an electronic display without obstructing the view.

Solar energy and other forms of alternative power have been making great strides in recent years. We have recently reported on a solar energy storage cell that works through the night and a 90 percent efficient spray-on solar material, as well as inexpensive smart windows. We’ve even found scientists developing clean hydrogen production, generating electricity from water evaporation, and looking to giant clams for alternative energy inspiration. While it’s great to have multiple alternatives, solar continues to look like the most promising technology for a mass market.

“Ubiquitous Energy is committed to bringing transparent solar cell technology to market to eliminate the battery life limitations of mobile devices,” says CEO and co-founder Miles Barr. “We are excited to be part of the I-Zone and look forward to demonstrating ClearView Power’s potential as an efficient energy source for a range of electronic devices that include wearables, tablets, and digital signage.”

Ubiquitous Energy was spun out of the Massachusetts Institute of Technology (MIT) with the goal of bringing transparent solar technology to market. It is currently developing its transparent, efficient solar energy cells at a production facility in Redwood City, California.

“It opens a lot of area to deploy solar energy in a non-intrusive way,” Lunt says of transparent solar energy technology. “It can be used on tall buildings with lots of windows or any kind of mobile device that demands high aesthetic quality like a phone or e-reader. Ultimately we want to make solar harvesting surfaces that you do not even know are there.”

The MSU research was featured in the journal Advanced Optical Materials. Ubiquitous Energy demonstrated their transparent solar energy panels June 2-3 at Display Week 2015, the Society for Information Display’s international symposium and exhibition, at the San Jose Convention Center in California.