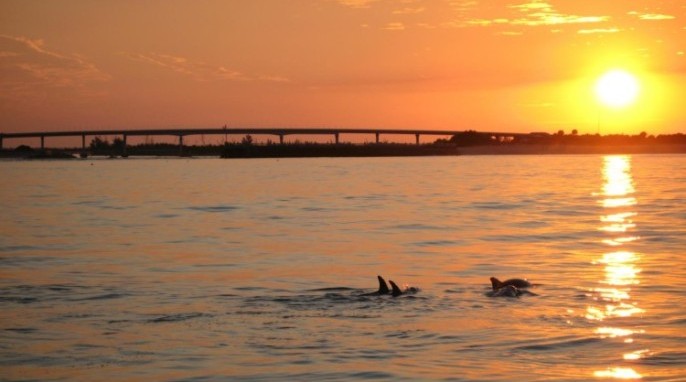 They don’t have Twitter accounts, but dolphins are able to form highly complex and dynamic networks of friends, according to a recent study by scientists at Harbor Branch Oceanographic Institute (HBOI) at Florida Atlantic University.

In this environment, the team carried out intensive photo-identification surveys for six and a half years. In that time, they learned a lot about the relationships, movement behavior, and habitat preferences of about 200 individual dolphins.

The team found that dolphins, much like humans, associate with fellows they like and avoid ones they don’t like. The study also found that dolphins in the lagoon tend to be selective about their groupmates, forming small communities.

“One of the more unique aspects of our study was the discovery that the physical dimensions of the habitat, the long, narrow lagoon system itself, influenced the spatial and temporal dynamics of dolphin association patterns,” says Elizabeth Murdoch Titcomb, research biologist at HBOI. “For example, communities that occupy the narrowest stretches of the Indian River Lagoon have the most compact social networks, similar to humans who live in small towns and have fewer people with whom to interact.”

In addition to providing a unique glimpse into dolphin societies, this study reveals some of the subtleties of how dolphins organize themselves, who they interact with or avoid, as well as when and where they socialize. It also gives scientists and resource managers a roadmap for understanding how dolphin populations perceive and use their environment. Social behavior influences communication, breeding, and transmission of diseases.

Founded in 1971, Harbor Branch Oceanographic Institute at Florida Atlantic University is a research community of marine scientists, engineers, educators and other professionals focused on Ocean Science for a Better World.

This research was recently published in the journal Marine Mammal Science. Other team members who worked on this research project include Greg O’Corry-Crowe, Marilyn Mazzoil, and Elizabeth Hartel.