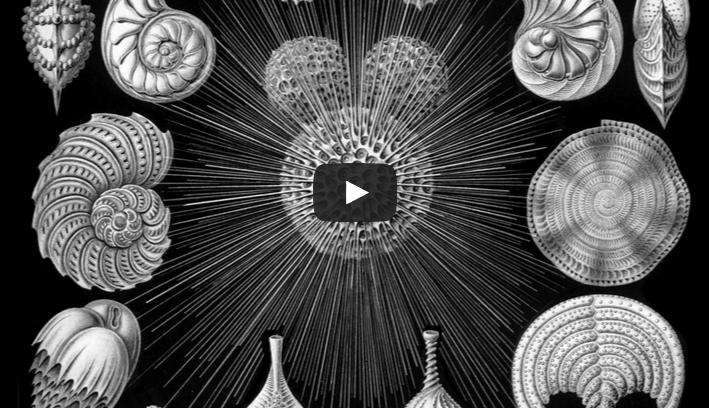 This episode of the Shelf Life video series explores the fossils of tiny marine organisms known as foraminifera. That name is a mouthful, so even scientists often shorten it to forams. These single-cell organisms still live in Earth’s oceans today. The fossilized shells left behind by their foram forefathers serve as tiny time capsules for climate data from bygone eras.

Ammonite fossils also contain clues to past climates. Ammonites are a group of ancient mollusks related to modern animals like nautiluses, which most closely resemble squid and octopuses. Like forams, ammonites were a phenomenally successful group, branching out into a wide variety of distinct species and diverse forms throughout the world’s oceans, where they endured for more than 300 million years. They also had hard shells—most frequently coiled, though some species sported spiral helices and U-shaped shells—and hard jaws, an extraordinary number of which survived as fossils.

Fossils sometimes get crushed while they await discovery. That’s why paleontologists have started building digital reconstructions of damaged fossils. If you like fossils, check out the fossilized tetrapod skull that looks like a crocodile’s skull, this fossil that offers clues to the evolution of mammals, and the jawbone fossil that sheds light on early human evolution.

The fossilized remains of forams and ammonites are useful markers of geologic time and ancient climates. “What we can do with the geological past is use Earth’s history to learn how life reacted to events in the past, to help to predict how we are dealing with the future,” says Ellen Thomas, a Micropaleontologist at the American Museum of Natural History.

EH Science is pleased to share the Shelf Life science video series by agreement with the American Museum of Natural History. Did you miss the other episodes in this video series? Watch them here on EH Science.