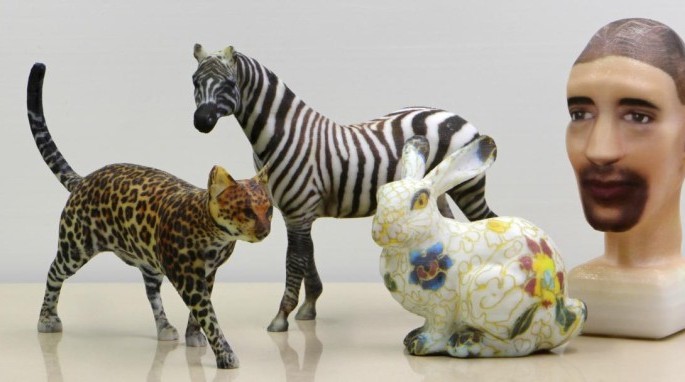 Science and art go together beautifully. It just got a lot easier and cheaper to add complex surface art to your 3D printing creations. Researchers at Columbia Engineering and Zhejiang University in China have developed a technique that enables more precise 3D printing than ever before.

Engineers often find ways to make our lives healthier, safer, and easier to clean. Sometimes, they make things easier to view, or in this case, more visually appealing.

The new technique is based on hydrographic printing, which is an industrial method of transferring color onto to the surface of manufactured 3D objects. The design is easily distorted, though. To solve the distortion problem, engineers have designed a system that predicts how colors are likely to get distorted on the object, and then produces a color film that exactly fits the surface textures.

“Attaining precise alignment of the color texture onto the surface of an object with a complex surface, whether it’s a motorcycle helmet or a 3D-printed gadget, has been almost impossible in hydrographic printing until now,” says Changxi Zheng, assistant professor of computer science at Columbia Engineering. “By incorporating a computational model into the traditional hydrographic printing process, we’ve made it easy for anyone to physically decorate 3D surfaces with their own customized color textures.”

Used in mass production for transferring repeated color patterns to a 3D print surface, hydrographic printing can be applied to various materials including metal, plastic, wood, and porcelain. The process uses a PVA film with printed color patterns placed on top of water. An activator chemical is then sprayed on the film, softening the color film to make it easily stretchable. Next, a physical object is slowly dipped into the water through the floating film. Once the film touches the object, it gets stretched, wrapping the object’s surface, and adhering to it. The color ink printed on the PVA film is transferred to the object. But the process has always had a problem: it is almost impossible to precisely align a color pattern to the object surface, because the object stretches the color film. The more complex the object, the more likely the color film will be distorted or torn.

How Oreos Could Impact 3D Printing

So, could your future household robot come decorated in the skin of your choice? Perhaps. “Current hydrographic printing has been limited to transferring repetitive color patterns,” Zheng explains. “But there are many times when a user would like to color the surface of an object with particular color patterns, to decorate a 3D-printed mug with specific, personalized images, or just to color a toy.”

The engineers used off-the-shelf hardware to build a calibrated system in which a mechanical apparatus precisely controls the object immersion. A 3D system measures the object orientation and its dipping location. To avoid film distortion and tearing, they tried a multi-immersion design: the object can be dipped multiple times, each with a different orientation and a film printed with a different color pattern. The computation of color patterns allows the transferred colors from individual immersions to be combined into the desired surface decoration.

According to the research team, their new system is inexpensive enough to be used at home by 3D printing enthusiasts. “This system is easy to set up for personal use and it’s quite inexpensive– less than 40 U.S. cents per printing,” Zheng notes. “And it works for a wide range of complex surface geometries and materials.”

This research on 3D printing decor was funded in part by the National Science Foundation and Intel. The research paper can be accessed here. A video demonstration can be viewed here. The research will be presented at SIGGRAPH 2015, August 9-13 in Los Angeles, California.