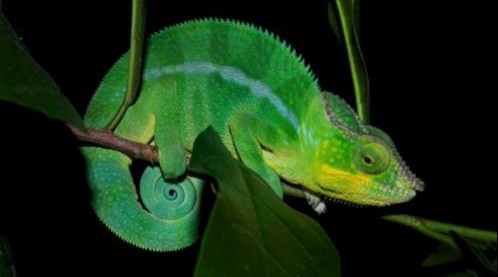 Chameleons are known for the remarkable ability to perform complex and rapid color changes during social interactions. Now, a team of scientists from the University of Geneva (UNIGE), Switzerland, has unveiled exactly how chameleons change their colors.

According to the research team’s findings, chameleons can adjust a system of nanocrystals in their skin cells, called iridophores. Better yet, chameleons have two layers of these iridophores, and the second layer reflects infrared light. These two layers can be controlled independently of each other, enabling chameleons to put on their colorful displays.

The panther chameleon is one species that can radically change color. It can switch from dark colors to bright, vibrant hues in just a minute or so to court a mate or face a competitor.

Besides brown, red and yellow, chameleons display so-called structural colors. “These colors are generated without pigments, via a physical phenomenon of optical interference. They result from interactions between certain wavelengths and nanoscopic structures, such as tiny crystals present in the skin of the reptiles,” explains Michel Milinkovitch, from the Department of Genetics and Evolution at UNIGE.

The researchers examined exactly how the transition from one flashy color to another occurs in the panther chameleon. It turns out that when the chameleon is calm, the nanocrystals are close together and reflect blue wavelengths of color. “In contrast, when excited, it loosens its lattice of nanocrystals, which allows the reflection of other colors, such as yellows or reds,” explain physicist Jérémie Teyssier.

Two for One: Chameleon Color and Heat Shield

The scientists also found that the second layer of iridophores protects a chameleon from overheating in the sun. It’s like having a built-in layer of sunscreen, and the chameleon can adjust it’s heat shield as needed.

This study is published in the journal Nature Communications.