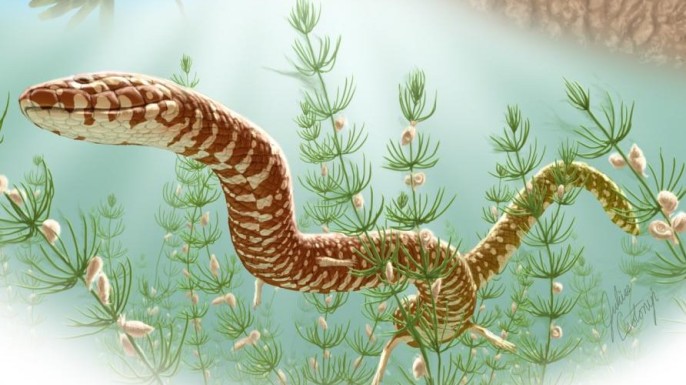 Snakes are much older than previously thought. Paleontologists have found the oldest snake fossils yet. 167 million years ago, snakes had legs.

Think of a snake and you might picture a legless reptile. There was, however, a time long ago when snakes had legs. Scientists have now determined that snakes began evolving their characteristic skulls, expandable jaws, and elongated bodies long before they lost their limbs.

An international team of paleontologists has identified the fossilized remains of several ancient snakes that are, by far, the oldest ever found. The specimens, such as those pictured here, range from 140 to 167 million years old, making them nearly 70 million years older than any other ancient snake fossils previously unearthed.

This astonishing new find is changing the way we think about the origins of snakes, as well as how and when they evolved. “The study explores the idea that evolution within the group called ‘snakes’ is much more complex than previously thought,” says Michael Caldwell from the Faculty of Science at the University of Alberta.

Scientists now know that snakes — animals distinguished by a hinged jaw — were evolving their elongated bodies and flexible jaws at least 167 million years ago, but still had small legs. Until this latest discovery, the fossil record shows snakes appearing in large numbers only about 100 million years ago. Scientists now think that the finding of older animals points to a gap in the fossil record and it is probable that even older snake fossils are waiting to be found.

These animals lived alongside the dinosaurs of the Jurassic period. The oldest specimen is a small fossil found near the Oxfordshire village of Kirtlington, England. Named Eophis underwoodi, it is as yet unknown if the snake was fully grown when it died. The largest snake in the collection, Portugalophis lignites, was found in coal deposits in Portugal, near Guimarota. It was a more than a meter in length when alive. Long ago, many of these ancient snakes (Eophis, Portugalophis and Parviraptor) lived in swampy coastal areas in western parts of ancient Europe. A North American species called Diablophis gilmorei dwelled in what is now western Colorado.