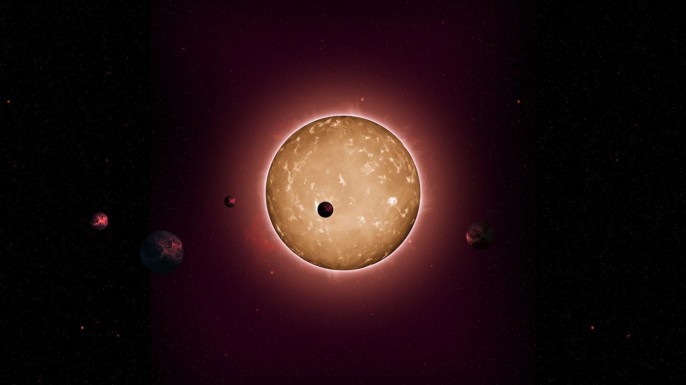 An ancient solar system, dating back to the dawn of the Milky Way Galaxy, has been discovered by an international team of astronomers. Researchers have found five Earth-sized planets in orbit around a Sun-like star called Kepler-444 that, at 11.2 billion years old, is the oldest star with a planetary system ever found. This discovery suggests that ancient worlds are out there, and some of them may support life.

Each of Kepler-444’s planets is a little smaller than Earth. “We’ve never seen anything like this – it is such an old star and the large number of small planets make it very special,” says Daniel Huber from the University of Sydney School of Physics in Sydney, Australia.

It was once believed that rocky, Earth-like planets were a recent formation, but astronomers around the world are very excited to discover that such an ancient system of terrestrial-sized planets formed when the universe was just a fifth its current age. Kepler-444 is two and a half times older than our own solar system. “This tells us that planets this size have formed for most of the history of the universe and we are much better placed to understand exactly when this began happening,” Huber says.

Discoveries like Kepler-444 provide tantalizing clues about whether other truly Earth-like planets may exist, when they started forming, and if they support life. “We’re another step closer towards finding the astronomers’ holy grail – an Earth-sized planet with a one year orbit around a star similar to our Sun,” Huber says. According to Tiago Campante from the University of Birmingham: “We now know that Earth-sized planets have formed throughout most of the Universe’s 13.8 billion-year history, which could provide scope for the existence of ancient life in the Galaxy.”

Steve Kawaler and a team from Iowa State University observed the ancient star using NASA’s Kepler satellite. They then used a technique called asteroseismology (a study of sound waves within a star) to determine the diameter, mass and age of the star. The presence and size of the Kepler-444’s orbiting planets was detected by measuring how much the star’s light dimmed when the planets passed in front of it.

“It was clear early on that we had discovered something very unusual because we had five planets orbiting a very bright star – one of the brightest Kepler has observed. It is fantastic that we can use asteroseismology to date the star and determine just how old it is,” Huber says.

Top Image: An artist’s conception of Kepler-444 with a planet passing across it (Tiago Campante/Peter Devine)