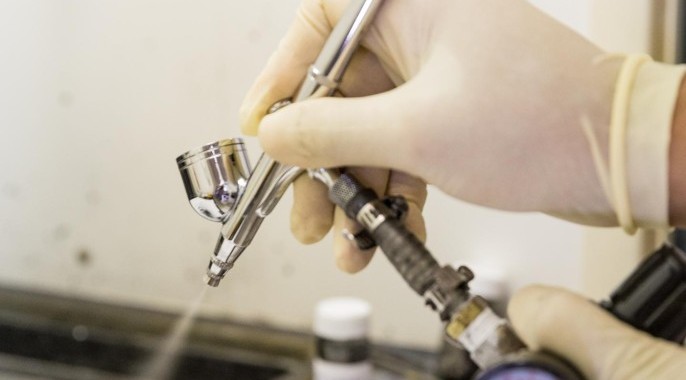 Solar power may be on the verge of becoming a great deal cheaper, more efficient, and longer lasting with a spray-on solar power material.

A team of scientists at the University of California, San Diego has developed a new solar power material for concentrating solar power (CSP). The new material is sprayed on and can absorb and convert more than 90 percent of the sunlight it captures into heat.

The new spray-on solar power material is incredibly efficient because it has a multi-scale surface, which is made up of particles of many sizes ranging from 10 nanometers to 10 micrometers. Those different-sized particles give it a lot of surface area to capture and retain sunlight, hence the material’s high efficiency.

CSP is an emerging alternative clean energy market that currently produces about 3.5 gigawatts worth of power around the globe. That’s enough to power more than 2 million homes. Additional construction is underway to increase the output to 20 gigawatts of power in coming years, but how?

According to the research team, one of the key attractions of this new technology is that it can be used to retrofit existing power plants that use coal or fossil fuels because it uses the same process to generate electricity from steam.

Most power plants burn coal or fossil fuels to create heat that evaporates water into steam. The steam turns a giant turbine that generates electricity from spinning magnets and conductor wire coils.

CSP power plants also create the steam needed to turn the turbine, but they do it by using sunlight to heat molten salt. The molten salt can also be stored in thermal storage tanks overnight where it can continue to generate steam and electricity 24 hours a day.

The team is working to build a version of their new solar power material that can withstand temperatures greater than 700 degrees Celsius and last for years outdoors in all sorts of weather. In contrast, current solar absorber material functions at lower temperatures and needs to be overhauled almost every year for high temperature operations.

One of the most common types of CSP systems uses more than 100,000 reflective mirrors to aim sunlight at a tower that has been spray painted with a light absorbing black paint material. The material maximizes sun light absorption and minimizes the loss of light that would bounce off in the form of infrared radiation.

The UC San Diego team has spent three years using their combined expertise to develop, optimize, and characterize a new material for this type of solar power material.

“We wanted to create a material that absorbs sunlight [and] doesn’t let any of it escape. We want the black hole of sunlight,” said Sungho Jin, a professor in the department of Mechanical and Aerospace Engineering at UC San Diego Jacobs School of Engineering.

Jin, along with professor Zhaowei Liu of the department of Electrical and Computer Engineering, and Mechanical Engineering professor Renkun Chen, developed the Silicon boride-coated nanoshell material. They are all experts in functional materials engineering.

Their work, funded by the U.S. Department of Energy’s SunShot program, was published in the journal Nano Energy.