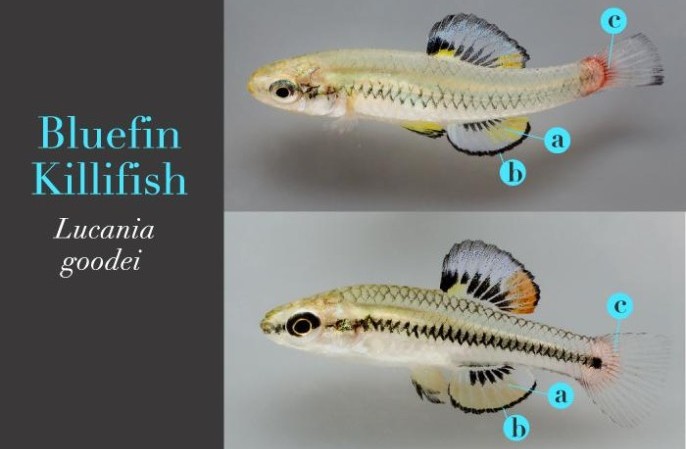 Fish use their fins for swimming, but fins can also advertise a fish’s social status and health. In a new study, researchers report that for the male bluefin killifish (Lucania goodei), each colorful fin communicates different messages to other fish.

They’re called “bluefin” killifish, but these fish often have red, yellow and/or black markings on their fins. University of Illinois animal biology professor Rebecca Fuller noticed these colorful fins while snorkeling in Florida and decided to find out what causes the variation.

Melanin, the black pigment, is a badge of status among male killifish. Those fish with more prominent melanin markings tend to dominate. “Melanin is a signal to other males: ‘I’ve been winning in the past and I’m doing well and get out of my way,'” Fuller says.

Carotenoids color the tail fins and associated with better body condition, lower parasite infection and good spawning success. This suggests that females respond positively to the brightly pigmented tail fins of potential mates, Fuller says. Carotenoids are the same pigments that give carrots and apricots their color. They are antioxidants that remove highly reactive ions or molecules that can damage cells and tissues. Because killifish obtain carotenoids only by eating, the researchers are hypothesizing that a flamboyant display of carotenoid color signals to female fish that they have found a particularly well-fed individual to mate with.

The researchers found that the pterin and carotenoid color patterns were independent of one another.

“We are finding that communication is complicated in nature and that animals have evolved ways to send different messages to different receivers,” Fuller says. “In the case of bluefin killifish, multiple messages are being provided by three distinct pigments that are in three different areas of the body. Both females and males are getting these messages. Males are paying attention to the melanin, most likely, and females are paying attention to these more-colorful fins.”

The paper, “The meaning of melanin, carotenoid, and pterin pigments in the bluefin killifish, Lucania goodei” has been published in the journal Behavioral Ecology. The study was funded by the National Science Foundation Division of Environmental Biology and the University of Illinois.