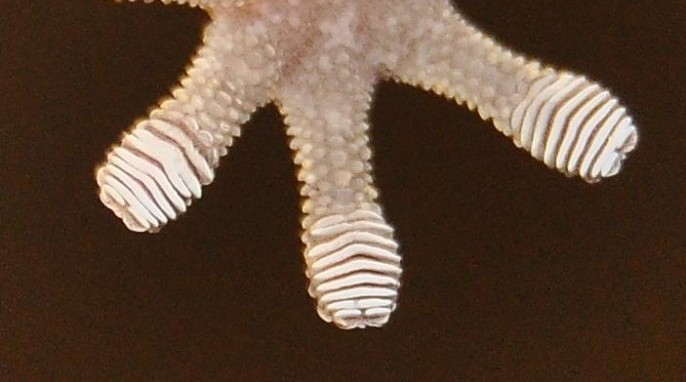 An in depth study of how a gecko’s feet work could lead to designs for more agile robots that can maneuver on complex surfaces.

To climb steep surfaces, geckos use an adhesive system in their toes. This evolutionary innovation is how they climb vertically both up and down. On the underside of their toes are structures calledsetae, millions of very fine hair-like structures that increase the surface area and improve contact between the foot and the surface on which it rests.

This adhesive system works best when the gecko plants its weight along the long-axis of the toe, and with the natural curvature of the setae. That’s great for going uphill, but exactly what adjustments do geckos make to go back down?

Biologists at the University of California, Riverside have found that geckos turn their hind feet around and use the adhesive system for braking and stabilty when climbing down a steep surface. When the toes of the gecko’s hind feet point backward, the setae are aligned to counteract gravity. Specifically, on a 45 degree downhill slope, the geckos were found to rotate their hind limbs up to 70 degrees.

WHY SPIDERMAN CAN’T EXIST, BUT A GECKO CAN

These findings may have applications in robotics, specifically in how agile robots can be designed achieve a controlled decent down a slick or complicated surface. So far, most studies of animal locomotion have been on level terrain. In nature, moving downhill tends to be more complicated than moving uphill or on a flat surface.

“Gecko adhesion is directional,” explaines Aleksandra V. Birn-Jeffery. “It doesn’t work like Velcro, and there are no suction cups. The adhesion occurs via intermolecular forces and friction (shear force), and it primarily acts along the long axis of the digit. This constrains how the foot must be orientated during locomotion.”

The research also showed that when geckos move downhill, the forelimbs likely serve as brakes, pressing down on the surface to increase friction. The hind limbs act as stabilizers, like the training wheels on a child’s bicycle. In the future, agile robots could use this same strategy.

“This multi-functionality of the gecko adhesive system permits effective locomotion on both uphill and downhill slopes,” says Timothy Higham, assistant professor of biology. “Without this ability, geckos would be effective at going up, but they would not be able to descend as easily. Indeed, they could plummet downhill.”

Before it applies the adhesive system, the gecko curls its toes up in the air, then lands the foot on a surface, uncurls the digits, and engages the system. Then, before lifting its foot up again, it curls up its digits. “They do this to release the adhesive system. Otherwise, it might be difficult to get their feet off the surface, the adhesive system being very strong,” Birn-Jeffery explains. “It is curious that not many people have looked into how geckos move downhill,” he continues. “We are the first to really figure this out.” Is this how the next generation of rovers will explore the surface of Mars?

This study of agile robot development based on gecko feet was published today in Biology Letters, a publication of the Royal Society. The research was supported by a grant from the National Science Foundation.