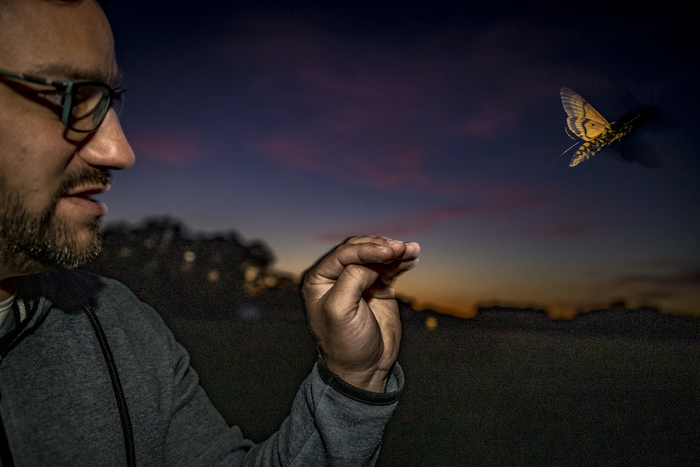 Moth migration may be guided by an internal compass to find the way, according to a new study that tracked flight paths of individual moths.

Just like we may take an annual vacation, every year countless animals, birds, and insects migrate seasonally. Many of these organisms travel very far each year. How do they know where to go? In the insect world, migration of butterflies is very well studied; however, not much is known about moth migration. Moths are related to butterflies, but most of them are active during the night. Every year many of these insects take a trip and most migrate at night. It is possible that many of us haven’t seen moths during migration. Maybe some moths you see in your garden have traveled a long distance to grace you with their presence!

Scientists held different views about moth migration throughout the 20th century. It was believed that moths controlled migration movement irrespective of wind in the first half of the 20th century. However, since there was no evidence in support of this, scientists in the second half of the 20th century believed that movement was largely controlled by the wind. Scientists currently think that migrating moths can adapt to wind conditions. In this study, researchers from institutions in Germany, the UK, Switzerland, and Australia studied the flight paths of moths and how they are affected by wind.

For this, Myles Menz and fellow researchers used the death’s-head hawkmoth (a large moth with skull-like markings). These moths arrive in Europe (north of the Alps) to breed each spring and the new generation of moths return to the Mediterranean and to sub-Saharan Africa in autumn. It was found that these moths can fly in a straight path irrespective of wind conditions. This means that they have an internal compass to orient themselves. This study adds to our knowledge about how insects migrate.

Moth migration: what is known so far

Even though a lot is known about the migration of a population of insects, not much is known about individual insects. Most insects migrate to breed, avoid predators, or avoid harsh weather. For example, European moths travel southward during autumn and northward during spring. It is also predicted that Australian bogong moths rely on Earth’s magnetic field and visual landmarks for migration. How moths navigate and maintain flight paths during migration has not been explored much. The main challenge has been mechanistic as it is hard to attach trackers onto such tiny organisms and track their flight paths at night for long distances. Studies to date have been unable to track individual moths.

In their study—published in the academic journal Science—Menz and fellow researchers set out to uncover how moths maintain flight paths over long distances and in response to environmental conditions. The death’s-head hawkmoths used in this study are large enough to take the weight of trackers. The researchers attached tiny trackers to the moths, and then complete tracks were recorded over a full night during seasonal autumn moth migration (from the Alps to the Mediterranean or sub-Saharan Africa). This gave information about how moths adjusted their flight paths as they migrated southward.

Researchers recorded fourteen moths in migration and detailed tracks of seven moths. Light aircrafts were used to record the information from the trackers. These aircrafts gave precise GPS location information in five- to fifteen-minute intervals. It was found that the moths started migrating at a similar time (after sunset) and the migration direction was south-southwest. This is very similar to other insects headed to the same destination, i.e., the Mediterranean or northwest Africa. Moreover, the speed of flight was recorded and was found to be similar to their known self-powered speed. This means that these moths either control their flight speed or hardly get assistance from the wind! Furthermore, moths maintained straight flight paths for tens of kilometers despite being subjected to varying wind speeds. In fact, two of the seven moths crossed the Alps in a single night.

Next, the researchers wanted to study how moths maintain their straight paths. For this, they calculated the angle between wind direction and the flight path taken by moths. It was found that moths employ three different strategies, which were partially influenced by ambient wind and topography (physical features of Earth). The first strategy was used when wind direction was unfavorable and moth migrations followed the most direct route by maintaining a constant southward track. The second and third strategies were used when wind direction was favorable. Scientists predicted that the favorable wind would aid the moths. However, it was found that moths can balance speed and direction by taking some assistance from the wind, but are not swayed completely.

This finding shows that these moths have an internal compass system that helps them maintain straight flight paths irrespective of wind conditions. Migrating hawkmoths have excellent night vision and could possibly use visual cues to navigate. When the straight moth migration travel paths were overlaid onto a map with physical features, it was found that moths avoid the highest elevations of the Alps, and might be using mountain passes and valleys instead.

This is the first study where moth migration flight paths have been tracked for a long distance. The researchers have elegantly demonstrated that moths can modify their flight paths in response to environmental conditions. It still needs to be determined what navigational cues these insects rely on. These results further show that insects can use complex means to maintain flight paths, giving an insight into insect migrations.

This research article was published in the peer-reviewed journal Science.