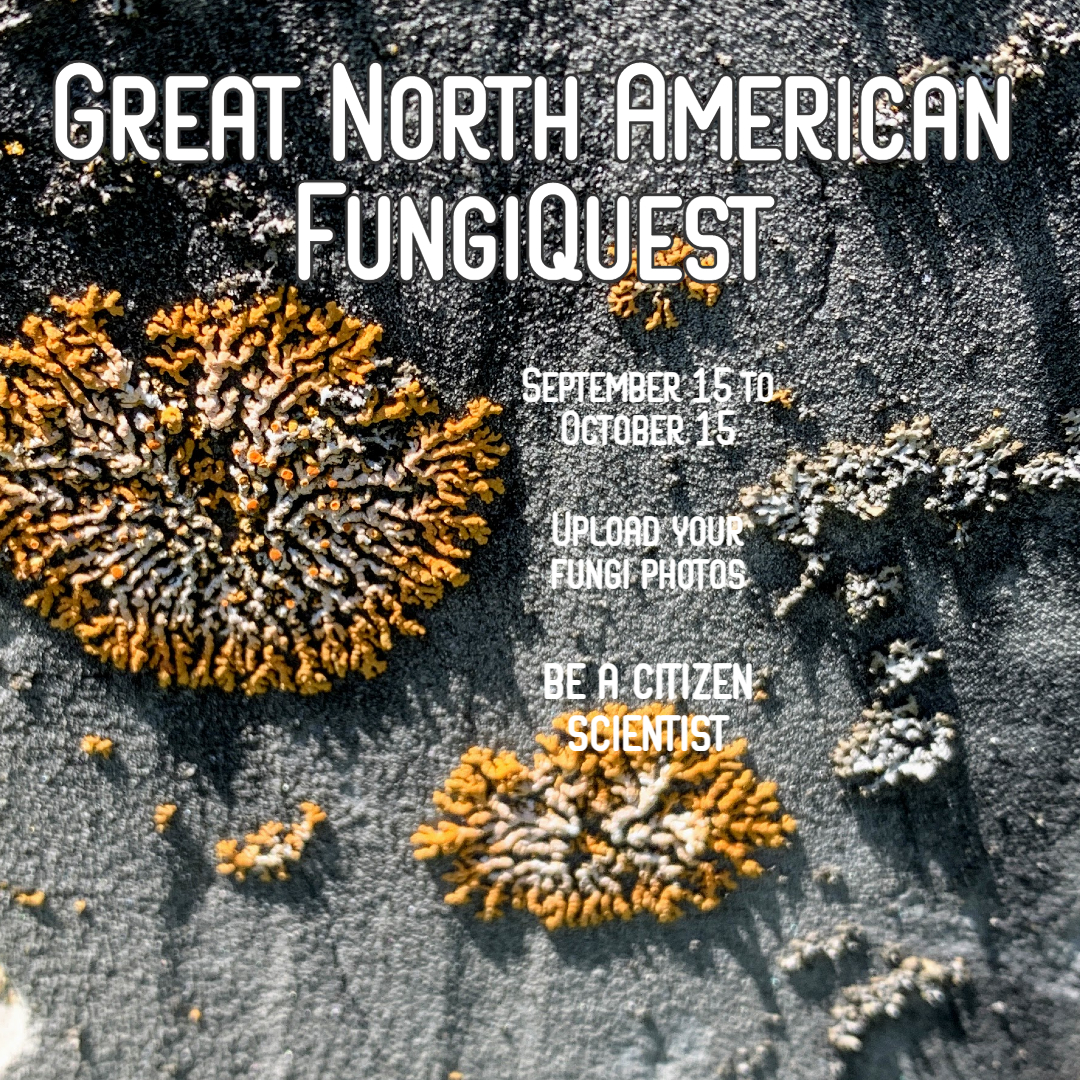 Participate in the Great North American FungiQuest September 15 to October 15 by taking photos of local fungi on your phone!

Fungi serve an invaluable role in our ecosystem. They provide humans and a huge variety of insects and animals with top notch nutrition, but that’s just the tip of the iceberg. They are the decomposers of our ecosystem and they provide us with medicine. They raise our bread, turn grain into beer, grapes into wine and age our cheese and sausages. In the last ten years we have even begun to use fungi to replace leather, replace meat, filter our waterways and consume petroleum and plastic. All this, and we only know around 150,000 of the estimated 3,000,000 species of fungi.

New species are being discovered all the time, like the Squamanita species found this summer by citizen scientists in the Scottish highlands. In fact, new species of fungi are discovered almost weekly. And now, you can get in on the action.

The largest-ever fungi observation event is coming to North America. The Great North American FungiQuest is a month long event beginning September 15, 2022 with the goal of observing and identifying as many species of fungi as possible across North America to develop a better understanding of the still-little-understood abundance of mushrooms, molds, yeasts, toadstools and more on our continent. Our goal is 50,000 observations in one month, and you can help us get there!

Getting people out and observing is our best chance at discovering new species, observing an endangered species, and, most important of all, identifying which species may actually be threatened or endangered. We simply don’t know what we don’t know, and in the world of fungi, there is a lot we don’t know.

FungiQuest is being held from September 15 to October 15 across all 23 countries of North America (including Central American and Caribbean countries). It’s open to all ages and most observation apps are supported.

How to Participate in FungiQuest

Taking part is simple, and can be done almost anywhere. Simply take a photo of any fungi you see and submit it to the observation app of your choice. You can use any of the following observation apps:

There is no project in iNaturalist—you need only to upload your fungi photos with a location to be included.

A few brief observing tips for fungi-hunters: A good observation requires more than one photo. The best observations include photos from the top, side and bottom of the fungi, as well as images of the environment it’s growing in.

That’s it! We use an artificial intelligence system called BioExpertise.org that relies on a double-blind peer review process to amalgamate all the observations and place them on a map for us to see. Then, scientists can use all that data to better understand what kind of fungi live where, and see how they fit into ecosystems around the world.

We’re also looking for data on the so-called “Friends of Fungi,” which include slime molds and lichen. These organisms aren’t technically fungi, but they’re often studied together. They’re included in the FungiQuest challenge, too, so send us as many photos of them as you can!

FungiQuest also includes various contests and observational challenges. We’re offering awards for the most correct identifications, the most observations and more, with prizes that include foraging courses and grow kits! The goal is to provide as much incentive to people, clubs and schools to participate in this citizen science project!

Mycological clubs across North America are already gearing up for the big event. A representative from the Nova Scotia Mycological Society said: “This sounds great and we would love to participate. We are actively trying to promote more events and activities to our members to keep up with growing interest!” The North American Mycological Association (NAMA) will be handing over control of their Instagram account for the event’s first week, and will also be featuring it on their various social media channels and in their Mycophile magazine. Get in contact with your local mycological club for more information!

To stay informed about the event, be sure to join the Think Fungi Community, where updates will be posted. To view the map of all the observations, visit our observation page. Think Fungi will also be hosting an online mushroom hunt and some other social media contests throughout the FungiQuest event, so be sure to check out their Instagram account to win even more prizes!

You can also find more fungi-related citizen science projects on SciStarter, where you can add them to your Dashboard. And if the FungiQuest sparks a newfound love of all things fungus, we’d love to hear about it!

Robert Courteau is the creator of Think Fungi, a non-profit organization dedicated to fungi research, education and conservation. Robert is also the President of the Ottawa Mycological Society and a member of the North American Mycological Association’s Culinary Committee. Until 2013, Robert was a chef which led to his foraging of wild mushrooms and subsequent tumble down the rabbit hole of all things fungi. Robert likes to personally welcome every person who joins the Think Fungi community.