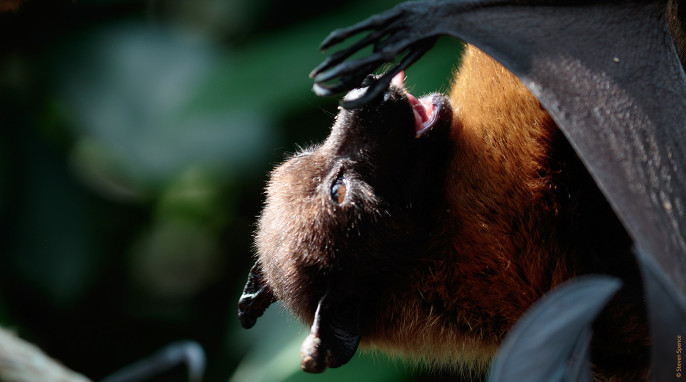 Covid-19 is not the first pandemic to strike humanity, and it won’t be the last. Scientists are investigating bat-human virus transmission.

Since the turn of the century, we’ve already been gripped by three major outbreaks of new diseases—SARS in China, MERS in the Middle East, and Ebola in Africa—that have had devastating social and economic effects. Wouldn’t it be helpful if we could predict where the next emerging infectious disease is likely to occur? Now, we are a step closer. Scientists have mapped high-risk regions, termed hotspots, for the transmission of viruses from bats to humans, based on several driving factors including bushmeat hunting and population density.

“We observe a global hotspot of risk in sub-Saharan Africa, including West Africa, the location of the most recent Ebola virus outbreak,” says Liam Brierley, a doctoral candidate at the University of Edinburgh, UK, and lead researcher of the study. Increasing human population and industrial expansion into wild areas such as forests brings humans into close contact with bats and heightens the risk of future outbreaks of bat-borne viruses, explains Brierley.

From Animals to Humans

Up to 75 percent of emerging infectious diseases in humans originate from animals; these are known as zoonotic diseases. Bats are particularly interesting to scientists because they are hosts of many zoonotic diseases and are suspected to be the origin of rabies, SARS, MERS, and Ebola in humans. Interestingly, bats are the only mammals capable of flight and represent an amazing 20 percent of all mammalian species.

Bat meat consumption was implicated in bat-human virus transmission with the emergence of SARS. However, viruses can also follow an indirect route from bats to humans: through other animals such as livestock, which serve as intermediate hosts for the viruses to gain entry into humans. Civets in the case of SARS and camels in the case of MERS are suspected of being these hosts.

In this study, Brierley and colleagues focused on the “spillover” effect of bat-human virus transmission. Early stages of zoonotic disease transmission involve two processes: the generation of a rich diversity of viruses, and opportunities for transmission created by humans. The researchers identified several risk factors contributing to these processes. Viral diversity depends on the diversity of bat species and climatic variability such as seasonal differences in temperature and rainfall. Risk factors that can increase transmission opportunities are human population density, bushmeat hunting, and livestock production. Among other wild animals, bats are also consumed as bushmeat in regions where human populations are growing.

Using data from 453 literature sources published from 1900 to 2010 and covering 33 zoonotic bat viruses, the researchers calculated the number of viruses that humans share with 148 species of bats. The shared viruses were geographically mapped according to the range of their bat hosts. The researchers then modeled how virus sharing is affected by the risk factors, to create an overall global risk map revealing hotspots of bat-human virus transmission.

The risk factors identified by the researchers turned out to be good predictors of bat viruses shared with humans. Central and South America, sub-Saharan Africa, and Southeast Asia emerged as hotspots for the transmission of bat viruses into humans because these areas have a high diversity of bat viruses. South and East Asia have the highest potential for contact between bats and humans.

Taking into account all the risk factors, sub-Saharan Africa emerged as the hotspot with the highest risk because it has a high diversity of viruses, large population centers of humans and livestock, and widespread practice of hunting for bats.

Brierley hopes these risk maps will stimulate further research and surveillance for novel viruses in the hotspots identified. While surveillance will be most important in regions of high viral diversity, introducing contact barriers will be most efficient in the areas with high potential for bat-human contact, according to Brierley. Contact barriers include regulating bushmeat hunting, reducing disturbance of bat populations in pristine areas, and lowering opportunities for bat-livestock contact.

This study was published in the journal The American Naturalist.

Watch the Shelf Life Video: Into the Island of Bats

A terrifying bat killing fungus is tearing through North American bat populations—and scientists have finally found a way to fight back. White-nose syndrome, a disease with a deceptively cute appearance, is killing millions of bats in North America. Encouraging research demonstrates that cooling down bat homes is a way to combat it. Learn more about fighting the bat-killing fungus.

Although bats have a bad reputation at the moment, especially regarding bat-human virus transmission, they play an essential role in our world. Bats are really large insect eaters. When bat populations decline, farmers use more pesticides that harm the environment. Bats are also large pollinators of fruits and plants: for example, the agave plant is reliant on bats to pollinate it so it can reproduce. Tequila is made from agave plants, so if you’re a fan, you can thank bats for your next tequila drink!