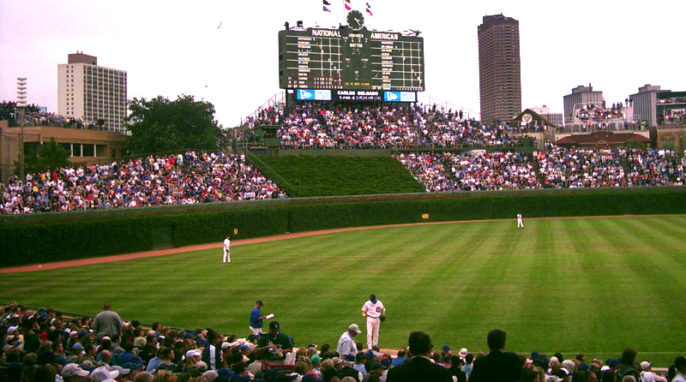 Wrigley Field is the venerable 1914 baseball stadium on Chicago’s north side. One of its most characteristic features is the ivy-covered outfield wall that occasionally swallows a hit ball, never to be seen again—a ground rule double.

[tweetthis twitter_handles=”@Biologuy1″]Does ivy stick to a wall or grab it, and will it destroy the wall?[/tweetthis]

The vines on the outfield wall at Wrigley Field are actually Boston ivy and Japanese bittersweet. English Ivy would have a tough time with Chicago winters, just like everyone else.

English ivy (Hedera helix) is an evergreen climbing vine in the Araliaceae family, but it will grow along the ground just fine if there is nothing available to climb. Like kudzu plants in the southern US, ivy can become invasive and choke out other plants, creating “ivy deserts.”

As English ivy grows along the ground, it shows its juvenile form. It has light-colored leaves with lobes and points, produces no flowers, and forms roots very easily. When ivy finds something on which to grow vertically, it transitions to the mature stage, with leaves that are less lobed or pointy, less root growth, and production of flowers and berries.

The stem of ivy is not capable of supporting the weight of the vine; it can’t stand up on its own. Yet it easily grows 30 m (98 ft) against the force of gravity and can reach heights of more than 90 m (300 ft) in conifer trees with no problem whatsoever. The mechanism by which it accomplishes this was investigated by none other than Charles Darwin, but much more recent work is showing the ivy plant to be quite a surprise.

Darwin noted that ivy sends out adventitious roots from its stem. Adventitious roots are those that arise from someplace other there where you would expect them, such as directly from  stems or leaves. In the case of ivy, they are aerial adventitious roots, since they do not get buried in dirt. They can still collect water but are protected from dehydration by having a thicker, waxier surface than those underground.

Darwin also noted that ivy did not wrap the adventitious roots around some protuberance on a vertical surface to allow the vine to cling. Those vines that do wrap around and grab are called tendril climbers and include clematis, grape, and sweet pea. In some cases, the clinging apparatus will have only that function; in other plants it will grasp, but can leaf or fruit as well. Vines that use their stems to wrap around a vertical substrate—the stem twiners and tendril climbers—are examples of thigmotropism (thigmo meaning “touch” and trope meaning “turn”). Interestingly, honeysuckle always coils clockwise, while wisteria always wraps counterclockwise. Climbing rose is an example of a rambler; it uses its hook-shaped thorns to help it stand up as it grows through and around another plant.

English ivy doesn’t twine, it doesn’t tendril wrap, and it doesn’t burrow into a flat surface to gain an anchor, although it will exploit a crack and grow through or along it. Neither does it just grow up until it touches something and then use its growth to ramble through and around the substrate. Instead, English ivy uses a chemical adhesive secreted by its adventitious root ends to stick to almost any vertical surface—it can even cling to something as smooth as glass.

The secretion is yellowish and forms circular dots on the vertical surface. It is very sticky and becomes stickier as it dehydrates. The compound contains polysaccharides that act as a carrying agent for discrete nanoparticles (with an average diameter of 65 nanometers) that are responsible for adhesion to the surface. Amazingly, the way ivy clings to a wall is very similar to how a gecko walks up a wall or hangs upside down. Ivy’s nanoparticles are like the nanohairs on a gecko’s foot. They increase the surface area of the material greatly and are so small that they can make very intimate contact with a surface. The nanoparticles get so close to the molecules of the surface that they use the van der Waals forces on the atomic level to attract the one to the other. Studies from 2010 showed that the interactions of the nanoparticles in the ivy secretion were enough to create the bond, and mimics using polystyrene nanoparticles have become excellent adhesives.

But the amazing abilities of ivy nanoparticles don’t stop there. They seem to disperse and absorb light energy much better than the metal nanoparticles that we currently use in our sunscreens. Titanium oxide and zinc oxide are the current state of the art in terms of reflecting, dispersing, and absorbing ultraviolet rays, but it seems that ivy nanoparticles are 70 times better at these tasks than are metal oxide particles. Our next generation of sunblock may come from ivy—talk about green technologies!

Ivy can be helpful in other ways as well. By covering the walls of a building, ivy keeps the heat in during winter by acting as insulation and reflects the sunlight away in summer, keeping the building warmer or cooler as the case may be. Ivy also deflects much of the rain from the surface that is covered, so it can protect against acid rain damage or other weathering.

Beware the Dark Side of the Ivy

But ivy can be damaging as well. Any surface attached to a wall that has gaps, such as shutters or wood siding, will allow ivy to grow in the cracks and pull it down from the wall over time. Ivy may not create holes in mortar or brick, but it will grow into them and then expand when the stems fill with water. This hydraulic action can break down stone over time and bring a building down if given enough time and opportunity.